“Improving the system is the only way for us to be prepared for the long journey ahead toward fulfilling and honouring the promise of peace, security, and human rights for all,” he said during his first speech at the annual General Debate.

Moreover, he said that the UN’s principles have guided the Organization’s work since its foundation. But it is yet to ‘respond to the aspirations of all peoples in all nations of the world.’

He also added that notwithstanding the progress achieved since the establishment of the United Nations, there remains much to do to fulfil the promise anf potential of the Organization.

“Conflicts and crises still persist in Africa, the Middle East, Asia, Europe, and the Americas. The Saharawi, Palestinian, and many other people continue to be denied their fundamental rights,” he stated.

The Prime Minister also commented on the rising refugee crisis in Europe and pointed out that the world is now seeing the largest number of refugees since World War II.

“We are seeing thousands of people arriving in Europe every day, trying to escape threats to their lives, which they face in the conflict zones in Syria, Iraq and Afghanistan, among several other countries,” he said. “We cannot forget that [these] crises, wherever they crop up, can drag on and spread indiscriminately, affecting the economy, social life, peace and stability in the regions and in the world,” he added.

Prime Minister Rui, elected recently after the country underwent a government transition announced Timor-Leste’s desire to join Association of Southeast Asian Nations (ASEAN) to boost progress in fragile States through the G7+ group and to ‘adopt the international mechanisms for the promotion of peace, democracy, justice, and human rights.’

Further, he spoke of climate change and urged the international community to act promptly and judiciously to tackle the impacts of the phenomenon, especially at opportunity provided by the the upcoming climate change conference in Paris.

“The discussions that will take place at the end of this year in Paris must produce universal, ambitious, and legally binding results. It is time to act with respect to climate change,” he said.

He also pointed out that the effect of climate change is even more pronounced in developing small island States, which are on the frontlines of this struggle.

“Our neighbouring islands in the Pacific have been assailed by the same storms and by an increase in the number of natural disasters, which are compounded, as if they were not enough, by soil erosion and the rise of sea levels,” he added.

Regarding the recently adopted Agenda 30 and the 17 Sustainable Development Goals (SDGs), the Prime Minister remarked that the new Agenda embodies balance of interests and priorities with a set of goals that are profoundly interlinked and indivisible. He specifically commended the inclusion of Goal 16, which strengthens the essential elements of peace, justice, and institutions.

“We know from our own experience that these elements are crucial to our joint commitment ‘to leave no one behind’ on our path toward sustainable development. Goal 16 is the basis for a truly inclusive agenda and, together with Goals 5 and 17, serves as the cornerstone for the achievement of the other goals,” he explained. 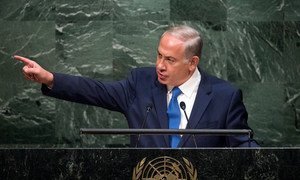 At the same United Nations podium from which Mahmoud Abbas announced yesterday that he would no longer be bound by accords with Israel, Israeli Prime Minister Benjamin Netanyahu today called on the Palestinian leader to begin immediate unconditional peace talks in a speech largely devoted to denouncing Iran for its threats to annihilate the Jewish State.