Several European leaders took to the podium today at the UN General Assembly’s annual debate, highlighting that the world is again living in restless times, especially in light of the unprecedented scale of humanitarian crises, including the migrant and refugee crisis.

Speaking on behalf of Germany, the Federal Minister for Foreign Affairs said the old balance of power is under pressure. “Powerful new players have emerged on the world stage,” Frank-Walter Steinmeier said, noting that above all, it is non-state actors who are increasingly responsible for war and violence, and for whom “there are no rules.”

The Minister highlighted that the world today is more closely interconnected than ever before with borders becoming indistinct making all countries neighbours. “Act as good neighbours!” he advised.

“Nobody is investing so much hope in this spirit of good neighbourliness today than the millions of women, men and children who have fled their homes,” he declared, adding that his country has assumed responsibility for them over the past months. Since the start of the year, Germany has reportedly taken in 600,000 refugees, with up to 10,000 new refugees currently arriving every day.

Foreign Minister Steinmeier also underlined how he finds it “scandalous” that UN agencies helping people in need are so under-funded that they have to cut food rations and medical aid. “I therefore met with the G7 States and other partners the day before yesterday, and am delighted to report that together we have raised an additional 1.8 billion dollars – of which over 100 million come from Germany.”

Regarding the recent agreement forged between Iran, Germany, and the five permanent members of the UN Security Council (United States, France, United Kingdom, China, and Russia), the German minister said after 10 years of negotiations, it’s been ensured that “Iran will never have an atomic bomb.”

He also called on countries to work together to end the “brutality of Assad’s dictatorship” to stop the slaughter in Syria. “At the risk of repeating myself, let me stress that when dealing with a humanitarian catastrophe as horrifying as the one in Syria, we are all neighbours!”

Meanwhile, neighbouring country Austria was represented at the General Assembly today by its Federal Minister for Europe, Integration and Foreign Affairs, who called for a “comprehensive approach” to the migrant and refugee crisis.

Sebastian Kurz said efforts should focus on confronting the root causes, namely terrorism and civil war, in the countries of origin. 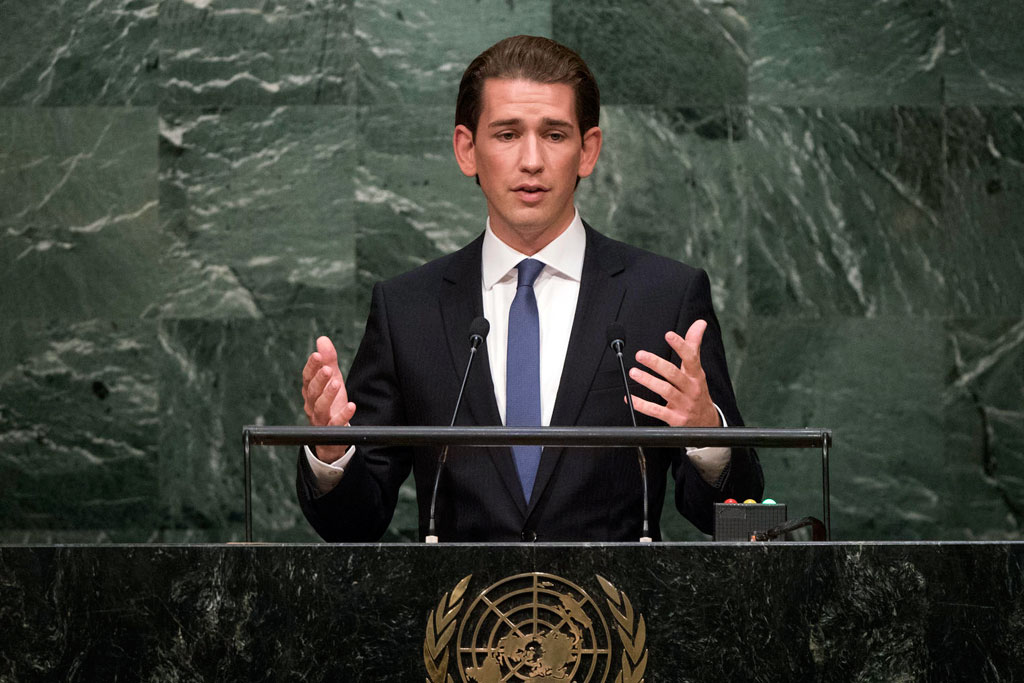 While the current political leadership of Syria could not be part of a long-term solution, to make peace, “we don’t talk only to friends,” he stated.At the global level, Mr. Kurz insisted that more unity is required and that the international community can make a difference only if the United States and the Russian Federation “pull in one direction.”

He also underlined that the Russian-Ukrainian conflict remains a challenge to the peace of Europe, and said his country supports a “peaceful settlement based on dialogue”, which would allow Ukraine to be free and stable, enjoying strong ties with Europe and Russia.

In addition, he voiced his support for restraint on the use of the Security Council veto in cases of mass atrocities.

Moving North, the Minister for Foreign Affairs and Trade of Ireland, Charles Flanagan, said his country will always speak out to defend the vulnerable, and that Ireland feels “ a strong sense of responsibility to protect the reputation” of UN peacekeepers. The country currently has 370 troops serving in seven UN peacekeeping missions. 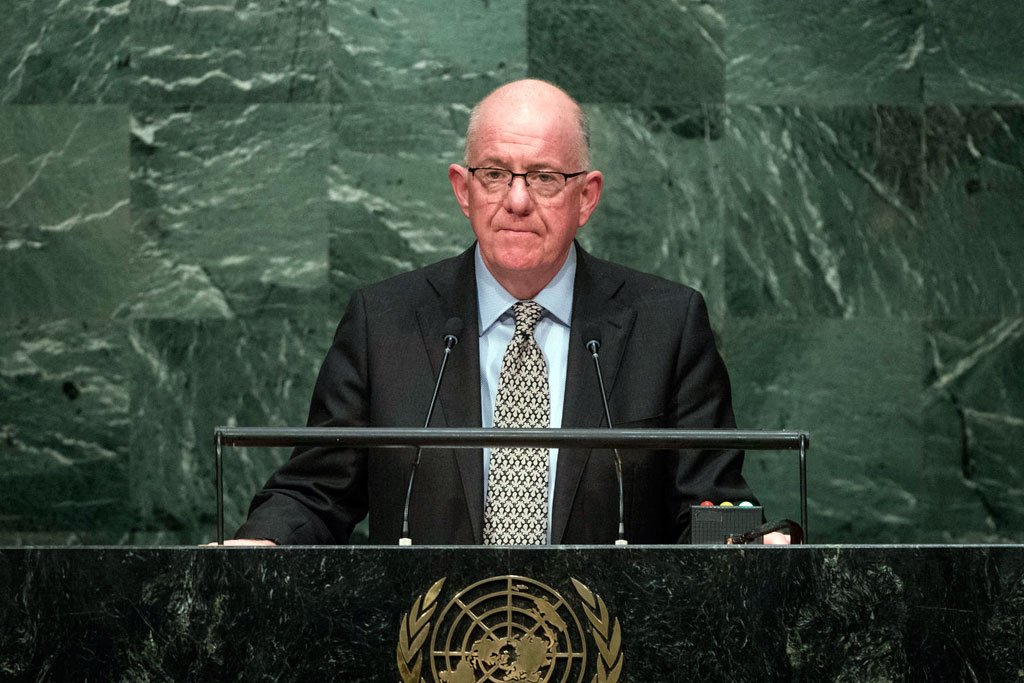 Referring to recent allegations of sexual abuse by UN personnel, the Irish minister said “those serving under the UN flag have a fundamental responsibility to behave in an honourable way and to be a force for good in this world,” adding that Ireland demands decisive action in confronting any criminal behaviour by UN troops.Turning to the refugee crisis, Mr. Flanagan urged nations to work with the Secretary General's Special Envoy on Migration, Peter Sutherland, who is “dedicating himself to assisting in the resolution of this global catastrophe.”

“Ireland is supporting the humanitarian effort by providing crucial funding and other resources,” the diplomat continued. “We have deployed search and rescue ships to the Mediterranean. We are providing for the resettlement of over 4,000 refugees.”

On the issue of human rights, he highlighted that this year, Ireland became the first country in the world to legalise marriage equality by a popular vote, and that it has been a “hugely positive experience.” He urged other States to follow suit and promote rights for LGBTI citizens.

Also speaking at the annual event was the Foreign Minister of Luxembourg who began his speech with a quote from Dag Hammarskjöld, the second United Nations Secretary-General: “The UN wasn’t created to take mankind into paradise, but rather, to save humanity from hell.” 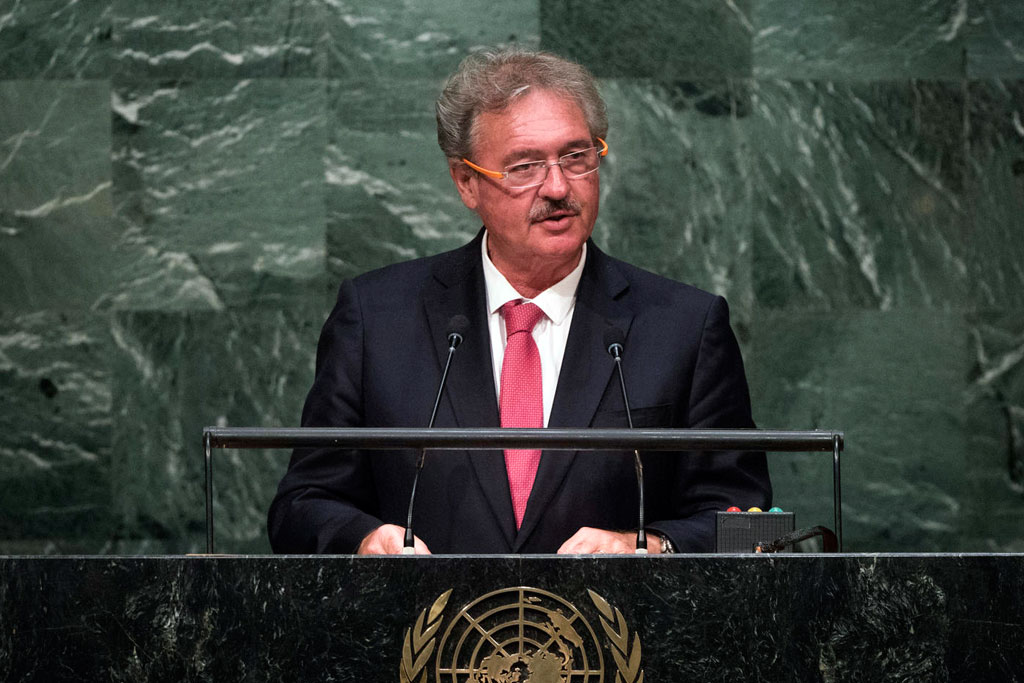 Jean Asselborn told world leaders that a priority issue on which he is entirely invested –especially in the context of Luxembourg presiding over the European Union Council – is migration.“In moments of crisis, nationalist reflexes unfortunately have a tendency to reappear. We saw it once more, tragically, this summer,” he noted, adding that no one country is capable of solving the migrant and refugee crisis alone.

Recalling that one Syrian out of six has now fled the country, Minister Asselborn urged the global community to support the UN Secretary-General’s Special Envoy for Syria, Staffan de Mistura, and stated that the only solution to end conflict in the war-torn country is a political one.

He further noted that much more remains to be said on other regions of the world such as Africa – but also on his own continent, Europe, where conflict is impacting Ukraine since February 2014, and where the Minsk accord, which calls for lasting and durable cease-fire, should be “fully and entirely” respected.

Slovakia, meanwhile, was represented by its Deputy Prime Minister and Minister of Foreign and European Affairs Miroslav Lajcák, who highlighted that the 2030 Agenda for Sustainable Development adopted last week by the 193 Member States of the UN is “not just about the numbers.” 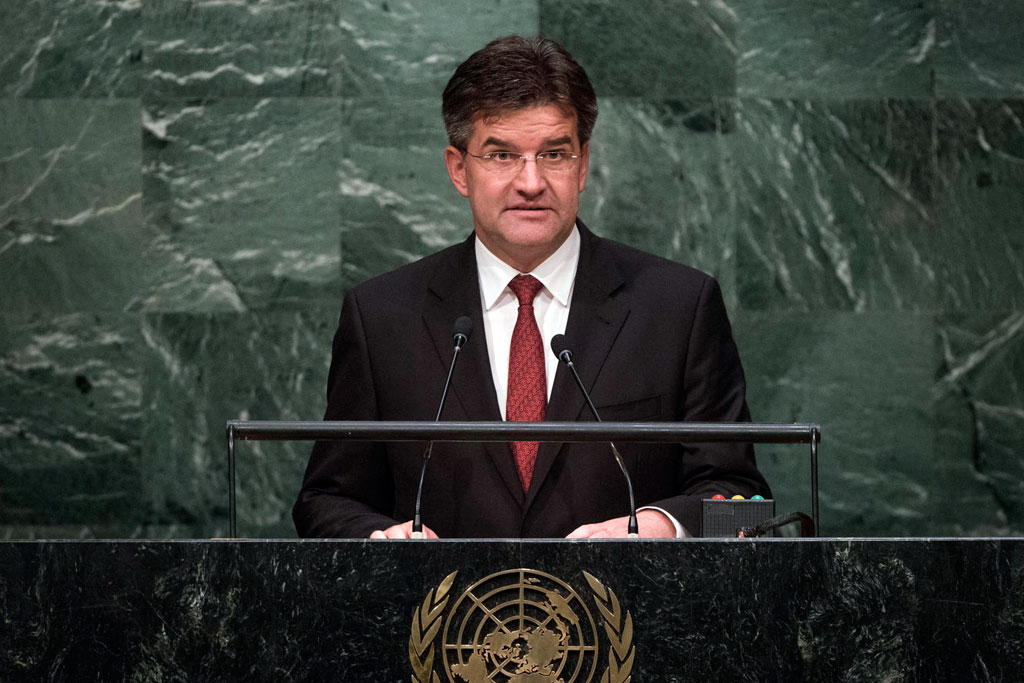 “This program is about changing our mindsets,” he declared. “It is setting up the new philosophy of existence in sustainable future. Its cornerstone is full inclusivity and zero disparity.”Highlighting that the world is now 60 days away from the UN climate conference taking place in Paris, France, the Minister underlined that Slovakia is committed to adopting a “meaningful and fair global climate agreement that will accelerate the shift to a low-carbon, climate-resilient economy worldwide.”

Mr. Lajcák concluded his remarks by quoting Norman Cousins, an American political journalist who received the UN Peace Medal in 1971: "If the United Nations is to survive, those who represent it must bolster it, those who advocate it must submit to it, and those who believe in it must fight for it.”

Western European leaders, taking the podium of the United Nations General Assembly on the opening day of 70th annual General Debate, today deplored the brutal abuses by Governments and terrorists that have, as in the case of Syria, driven millions of people from their homes.