Given global tensions, Alliance of Civilizations needed more than ever – UN officials

United Nations officials today stressed the ever-growing importance of the Alliance of Civilizations (UNAOC), especially in light of the rising xenophobia, intolerance and extremism being witnessed in various parts of the world.

Launched in 2005 through the initiative of Spain and Turkey, under the auspices of the UN, the Alliance maintains a global network of partners, including States, international and regional organizations, civil society groups, foundations, and the private sector to improve cross-cultural relations between diverse nations and communities.

Addressing the ministerial meeting held at UN Headquarters of the Group of Friends of the Alliance, Secretary-General Ban Ki-moon noted the mission of the decade-old initiative, which aims to build mutual respect among peoples towards a more peaceful, more socially inclusive world.

“The ideals we aim for stand in stark contrast to the realities in today’s world,” he stated, pointing to the unprecedented displacement worldwide, humanitarian disasters such as that witnessed in Syria, and the “growing xenophobia on the part of too many groups and even leaders.”

“Across the world, we see disturbing divisions among communities. Leaders are abandoning their responsibility– and stoking xenophobia to advance their own personal political ambitions,” Mr. Ban said.

“In this tense atmosphere, the mission of the Alliance of Civilizations is all the more important.”

The President of the General Assembly, Mogens Lykketoft, noted that since its inception, the Alliance has become a leading UN platform for intercultural dialogue, understanding and cooperation.

“Founded at a time of division and fear, the Alliance, including through its global forums, has consistently promoted tolerance, respect, dialogue and cooperation among different cultures, civilizations and peoples.

“Today, however, our humanity faces challenges on a par with, if not greater than those which the Alliance has faced to date. The intolerance, discrimination and xenophobia which we now witness towards different ethnic and religious communities, is deeply, deeply worrying.”

“It pains me to witness the barbarity and the absolute disregard for human life, for the lives and dignity of innocent women and children, demonstrated by ISIS, Boko Haram, Al-Shabaab and others – groups that are fuelled by hatred based on religious, sectarian and ethnic differences…”

He added that, in the midst of these challenges, however, the international community has the 2030 Agenda – comprising 17 goals and 169 targets that seek to promote sustainable and inclusive economic growth, social protection and a healthy environment – which was adopted by world leaders last week.

“Through its core initiatives – on youth, education, media and migration – the Alliance can make a significant contribution to realising the new agenda.”

Nassir Abdulaziz Al-Nasser, the High Representative for the Alliance of Civilizations, stated that the 2030 Agenda must include all people, especially young men and women, embracing cultural diversity and religious differences.

“This is where the work of the Alliance is paramount. Sustainable development is not possible where wars and conflicts reign.”

He said the 17 goals are attainable when people realize that cultural and religious diversity enriches societies, and this is where the role of the Alliance comes into play.

“To reach the targets defined under the 17 goals, we need to reinforce dialogue across civilizations and religions. We need to strengthen the culture of peace and work towards achieving the ultimate goal of living together in harmonious, inclusive and peaceful societies.” 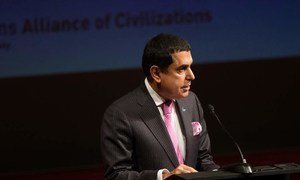 The High Representative for the United Nations Alliance of Civilizations, Nassir Al-Nasser, said today that the “vicious forces” of extremism, violence and terrorism should not hamper international efforts to prevent and combat such forces.