Denouncing the “warped ideology” of the Islamic State or Iraq and the Levant [ISIL], the Prime Minister of Malaysia, Dato’ Sri Mohd Najib Bin Tun Haji Abdul Razak, today urged the United Nations General Assembly to help spread awareness about the true nature of Islam, “which is nothing like that entity…that usurps its name.”

“We must acknowledge that we are not winning the propaganda war against the so-called Islamic State. Their twisted narrative is not being adequately countered to prevent many misguided people from joining or supporting from afar,” he said.

Speaking the truth about Islam is ever-more important, he said, stressing that non-State actors such as ISIL threaten to destroy sovereign States. They don't confine their horrific acts of cruelty within official boundaries.”

“It is sickening, and there could be no greater a slur on Islam – a religion of peace, moderation and justice. But these extremists cannot be defeated by traditional military means alone,” he continued.

"It is more important than ever that we spread awareness of authentic Islam, most especially when conflicts persist and people lose hope. For it is there that extremism finds fertile soil. And those who fight for extremism – for a perversion of true Islam – are one of the main drivers of the current migration crisis from the Middle East."

Mr. Razak also spoke of the security risk posed to his nation and the need for international collaboration to share information on terrorism.

“Our tireless, ever-vigilant security forces have intercepted many would-be [ISIL] recruits transiting through Kuala Lumpur. It is because of our efforts that they have not fallen into the darkness that blights Syria and Iraq,” he said.

“But some have. We have identified 39 Malaysians who have travelled to join [ISIL]. And we have arrested over 100 of our citizens suspected of links to [the group]. These threats are real.”

He also spoke of the need for Security Council reform “to better reflect 2015’s realities, not 1945’s,” he said.

“We were extremely disappointed that the proposed resolution to set up an international tribunal into the shooting down of flight MH17 did not go through because a veto was imposed,” he noted. “We will continue to seek justice through other legal options, because we owe it to the families of those who perished in this outrageous crime.”

Turning to the matter of the refugee crisis, Mr. Razak said that Malaysia would “open our doors to a further 3,000 Syrian migrants over the next three years,” adding that “it is only when we see that dreadful picture of three year old Alan Kurdi washed ashore – and recognize our own children in that tragic boy's innocent face – that we will act as our better selves.” 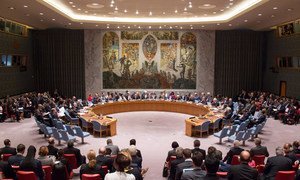 Secretary-General Ban Ki-moon today called for using all the tools available to the United Nations to help steer the Middle East and North Africa towards a path of freedom, safety and dignity, citing in particular the obligation of the international community to ensure a peaceful solution to the conflict in Syria and accountability for serious crimes committed there.