Secretary-General Ban Ki-moon today underscored the need for concerted action to prevent a relapse of the “horrific” violence that tore the Central African Republic (CAR) apart, while appealing for support from the country’s partners to promote long-term peace and development.

The country has recently witnessed an upsurge in violence in the capital, Bangui, that has left more than 30 people dead and over 100 wounded and forced thousands to flee their homes in search of safety, following the murder of a young Muslim man last week.

“As developments over the last days have demonstrated, the importance of international support, and the need to bridge religious and communal divisions and find common ground, has never been more critical,” Mr. Ban said at a high-level meeting on CAR, held on the margins of the General Assembly’s annual debate.

“Major challenges remain, beyond the immediate security concerns. Rebuilding, reconciling and reforming a country that has been exposed to years of violent crises takes time. And the humanitarian needs remain significant,” he noted.

Mr. Ban called on all parties to end the fighting and lay down their arms, stating that it is clear that the latest violence in Bangui is designed to destabilise the country and jeopardise the transition process.

“We cannot allow forces to undermine achievements over the past year and deny the aspirations of the vast majority of Central Africans for peace and a better life,” he stressed.

“All those who perpetrate or instigate crimes – including human rights violations – or incite violence must be held accountable. We must work together to ensure against a relapse of the horrific violence that tore the country apart. The United Nations will continue to provide steadfast support.”

He recalled the way the international community came together two years ago and showed its commitment to end violence, protect civilians and find a sustainable solution.

“One year ago, we encouraged broad-based dialogue, supported by regional and international partners. Local consultations culminated in the Bangui Forum on National Reconciliation.

Central Africans agreed on the need for security sector reform, justice for those responsible for serious crimes, and the rebuilding of their State for social and economic recovery.”

He cited progress on the political front, particularly the ongoing preparations for the elections later this year.

“Today, we are here to express our firm support to a peaceful end of the Transition but also look beyond, and focus on priority actions identified during the Bangui Forum that can be achieved within 18 months or less,” he stated. “At the same time, we are mindful of the most pressing priority to fill the funding gap in support of the election process.”

While thanking those that have already contributed, the Secretary-General noted that many programmes remain underfunded. “Without the resources to help address security and stabilization needs and ensure human rights for all, the country risks sliding back into protracted conflict and suffering,” he warned.

“More than anything, Central Africans urgently need concrete reassurance that peace and stability in their country remain high on the international community’s agenda.

“Today, I am calling on you to mobilize the necessary support for the speedy implementation of the outcomes of the Bangui Forum, the successful conclusion of the Transition, and the building blocks for long-term peace and development that the people of the Central African Republic demand and deserve.”

President of the Transition Catherine Samba-Panza, who was in New York this week to address the General Assembly but was forced to return to Bangui amid the latest developments, addressed the meeting via video teleconference.

She said that recent tragic events highlighted the numerous challenges that exist in the country, which is months away from the end of the transition period. The challenges basically have to do with implementing the recommendations of the Bangui Forum on National Reconciliation; the disarmament, demobilization and reintegration programme; and security sector reform.

The Government estimates that the three priorities of disarming and demobilizing ex-combatants; promoting justice and reconciliation; and good governance and economic development, will cost $202 million over the next 18 months. Around $85 million remain unfunded.

“The will of the Transitional Government is to give the new authorities that will emerge from the elections a country that can be governed and which is endowed with the necessary tools,” she stated. “The new government must be operational in the security area. This must be its top priority.”

Stating that “your duty is to stand by us,” Ms. Samba-Panza called for concrete commitments from the country’s partners and donors “to help the people of the Central African Republic get out of the spiral of conflict and suffering that they have been victims of.” 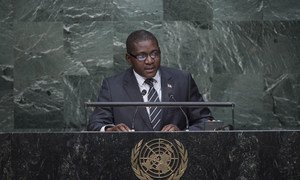 Warning that the Central African Republic (CAR) is currently seeing an upsurge in deadly violence in and around its capital, Bangui, Foreign Minster Samuel Rangba today called on the United Nations to step up its support for the war-weary country, including by strengthening the UN peacekeeping mission there and lifting sanctions impacting training of military forces.