In speech to UN Assembly, Haitian President spotlights process to wrap up nationwide elections this year

Praising the ongoing assistance his country has received from the United Nations, Haitian President Michel Martelly told the General Assembly today that a process has been launched that should lead to the achievement of presidential, legislative, municipal and territorial elections by the end of the year.

Mr. Martelly said that one year ago, the Secretary-General, in his report to the Security Council on the work of the UN Mission in Haiti – known by the French acronym MINUSTAH – had noted that the holding of inclusive elections is essential for consolidation of democracy and the rule of law and promotion of development in Haiti.

“I am pleased to affirm that Haiti is on the right path,” he declared, noting that the Haitian people are showing political maturity and the capacity to take their destiny into their own hands. The success of the elections is an important milestone along the path of the country’s stability and the political transition set to take place in 2016.

This will be a decisive indicator of the good performance and the success of MINUSTAH over the past 11 years, he added.

Significant progress has been achieved over the past four years, the President continued, affirming that during his Administration, democracy has been strengthened, rule of law institutions has been bolstered, the security situation has improved, human rights has been strengthened, extreme poverty has been reduced, foreign direct investment has largely expanded, and, after decades of stagnation, the economy has also seen growth.

As for progress on the Millennium Development Goals (MDGs), Haiti had made strides in education, child nutrition and access to water and sanitation. Such progress was been made possible in part to the United Nations and MINUSTAH, without which “no prospect for economic and sustainable development could have been seriously pondered.”

Meanwhile, President Martelly continued, MINUSTAH is adapting to a new context: the Haitian Government is opting for a reconfiguration plan which takes into account the current situation in the country. He hoped to see progress along those lines in an ordered manner.

“The transfer to Haitian institutions of the responsibilities for military matters, as well as police and development matters should be carries out according to a specific timeline [to] avoid any gaps in internal or external security of the country,” he explained.

President Martelly said that his Administration placed significant importance on the issues of defence and security. He has worked to strengthen the national police and to develop a new defence policy with the support of the Inter-American Defence Council. “This new force will actively participate in Haiti’s development,” he said, noting such activities as environmental protection, providing relief for natural disasters, providing security of national borders and protecting investments.

In a world where interdependence requires a global approach to tackle local problems, the United Nations must reinvent itself “for our common future” with a view to bringing Member States back together and bolstering multilateral relations for the betterment of all. Recent hopeful events in the area of diplomatic relations include the reopening of diplomatic relations between Cuba and the United States and the reaching of a deal on Iran’s nuclear programme with international negotiators.

Yet challenges abound, foremost among them, the seemingly daily expansion of non-State entities, not just in Syria and Iraq where such groups are attacking civilian populations and destroying cultural heritage.

“These threats are exceptionally grave and must be addressed by the international community. We must adopt all collective measures in order to guarantee international security and respect for human rights,” he said, urging determination to oppose “the barbarism of terrorist entities and criminal behaviour that threaten our common values.”

Mr. Martelly also said that "we cannot hope for an effective response to global challenges of our time without reducing the North-South divide, but an intensification of the fight against poverty and without a proactive response to the ecological crises that strike primarily the poorest countries." 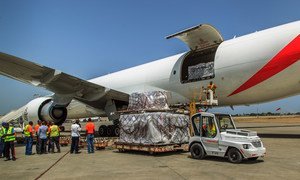 Welcoming the upcoming presidential, legislative and local elections in Haiti, which will begin on Sunday, United Nations Secretary-General Ban Ki-moon today stressed the need to ensure credible and peaceful polls.