Speaking today at the United Nations General Assembly, the Prime Minister of Fiji, along with the leaders of other small island developing States, warned of the existential threat of climate change and looked forward to the possibility of consensus at an upcoming UN climate conference in Paris.

He then turned his attention to the subject of climate change, noting that Pacific small island developing States (PSIDS) have “a unique perspective of the world to share with the international human rights community.”

“Like our neighbours in the South Pacific and other SIDS, we see the bright future we have charted for ourselves dimmed by the prospect of climate change and sea-level rise,” he said.

Fiji has been outspoken in insisting that all nations do their duty, he said, with regard to reducing greenhouse gas emissions.

“It is simply not acceptable for advanced economies to build a high standard of living based on the degradation of the Earth and the seas,” he said. “The time for excuses is over.”

Mr. Bainimarama said he hoped for an acceptable outcome at the Paris climate change conference later this year, and called for an agreement of a temperature rise of not more than 1.5 degrees centigrade above pre-industrial levels, also noting that it should be legally binding for all parties.

“We also call for the climate change adaptation measures to be 100 per cent grant financed,” he added.

He noted that, because of climate change, Fiji currently has plans to move 45 of its villages to higher ground, and also to settle people from other low-lying Pacific Island States.

The President also welcomed the Sustainable Development Goal on the conservation and sustainable management of the oceans.

“Our destiny is shaped by the ocean in which we are set,” he said.

Meanwhile, the President of Nauru, Baron Divavesi Waqa, highlighted the importance of the 2030 Agenda, which “places the welfare of human beings at its core and lays out a comprehensive set of goals and targets to help empower every individual to realize their full potential.”

He also spoke about the importance of the ocean as a source of almost all development possibilities for Nauru, and highlighted concerns over illegal, unreported and unregulated (IUU) fishing in the nation’s waters, noting that “if we are to be true to Agenda 2030 and the commitments made to SlDS, we must do much more to eliminate IUU fishing and ensure that the income from fishing goes to the rightful resource owners.” 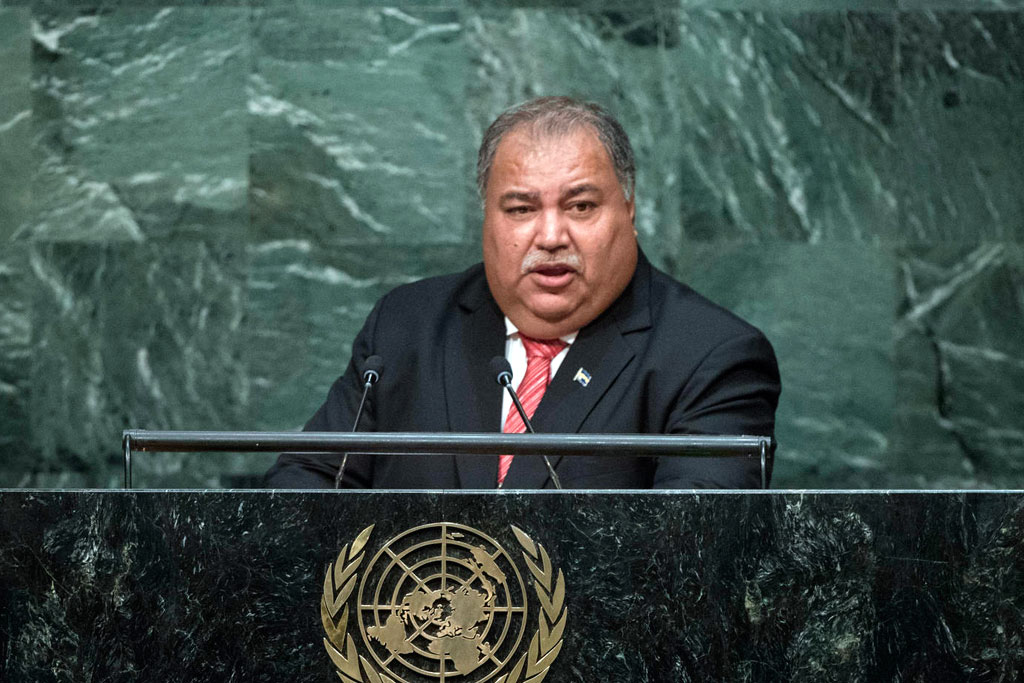 Turning to the subject of climate change, Mr. Waqa called it “the largest test of our international and domestic institutions.”

“Clearly, a strong, legally binding agreement in Paris is absolutely critical, with ambitious mitigation contributions from all countries,” he said. “The agreement should be guided by a temperature goal of 1.5 degree Celsius and consistent with our vision for a safe and secure world. It must also ensure climate finance is available for adaptation, particularly for the most vulnerable countries.”

He added that he believed many major economic powers wanted to reach an agreement in the upcoming Paris climate change conference.

“However,” he continued, “I’m starting to doubt whether they are willing and able to make the fundamental changes in their political and economic systems required to achieve our ambitious goals.”

Mr. Waqa warned that intense lobbying to accept an unsatisfactory outcome has already begun, which could yeild a “take-it-or-leave it deal” for climate change.

Meanwhile, the President of the Marshall Islands, Christopher Loeak, addressed the General Assembly on the pressing issues of climate change and the need to pursue nuclear disarmament.

“The UN’s 2030 Development Agenda – and its Sustainable Development Goals (SDG) – offers small island States a powerful tool to craft and adjust our own domestic strategies,” he said.

“In adopting the SDGs, the Marshall Islands cannot afford a ‘set it and forget it’ mentality which has too often marked past international efforts, he noted. 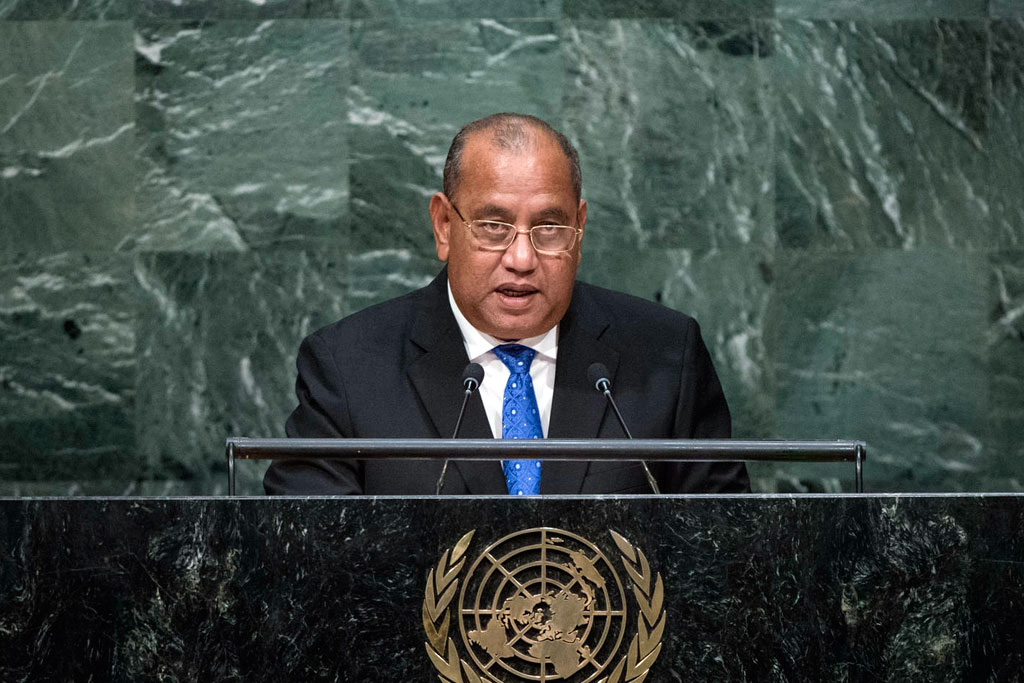 He said he also welcomed the establishment of a comprehensive assistance program with the International Atomic Energy Agency (IAEA), which will build his country’s capacity to monitor and evaluate serious issues of nuclear contamination, as well as addressing health strategies and other SDG benchmarks.

He also referred to the upcoming climate change conference in Paris.

“I am proud that climate change is now recognized by all world leaders as a reality which deserves, and is gaining, a firm and collective response. Everyone among us must act - and many, including my own nation, have already committed to emissions cuts well into tile future of 2025, of 2030 and beyond,” he said.

“A world without a true commitment, and meaningful pathway towards decarbonization is, for us in the island nations, ultimately, no world at all,” he said.

“As a low-lying island nation, with no higher ground, climate change poses a severe threat to our very security,” he continued. “Some have said there is no more hope, and no more time. I forcefully disagree. The future of my nation – the future of our very land – is perhaps more in the hands of my fellow world leaders than it is my own.”

In his remarks, Comoros President Mr. Iklilous Dhoinine noted the need to build on the achievements of the Millennium Development Goals, and endorsed the 2030 Agenda while cautioning against the misuse of sustainable resources.

On climate change, Mr. Dhoinine emphasized the importance of conserving and using the oceans, seas and marine resources for sustainable development. He also said that, in the same way, leaders should promote the sustainable use of terrestrial ecosystems and forests, and combat desertification and land degradation. 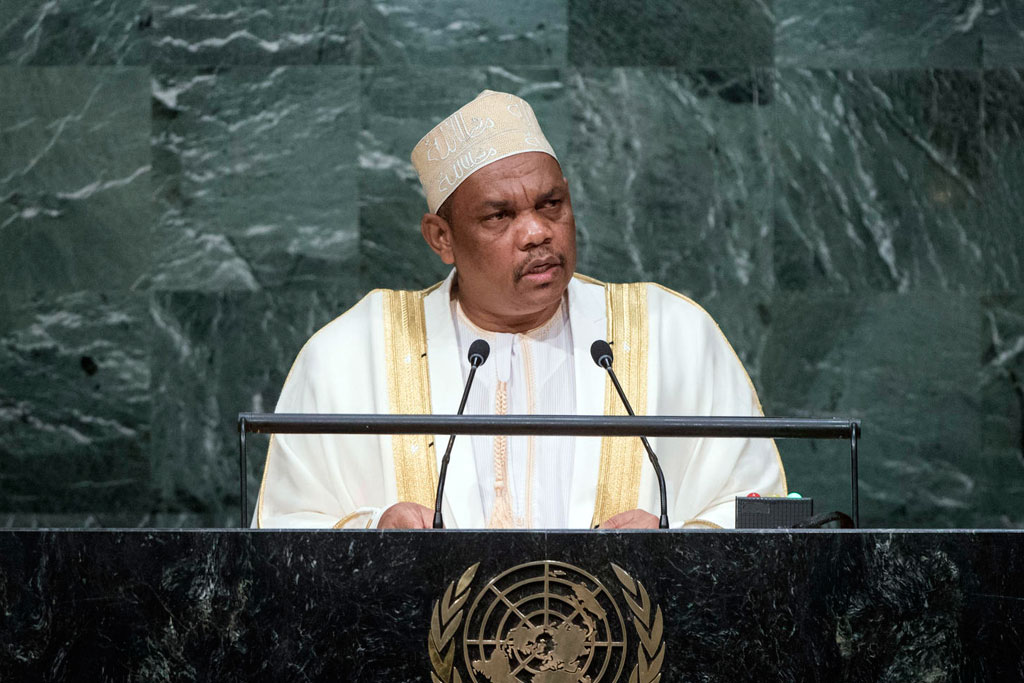 He also urged efforts to build peace and accountable institutions, as well as to ensure a world without poverty and inequalities.

Mr. Dhoinine also addressed the consequences of war, which have resulted in millions being forced “to leave homelands and board makeshift boats and live in inhumane conditions,” as well as “barbarous acts perpetrated by terrorist movements.”

Meanwhile, the Prime Minister of Vanuatu, Meltek Sato Kilman Livtuvanu, told the Assembly that climate change continued to be a major challenge for the world and a major threat for SIDS.

Mr. Livtuvanu said “if we do not resolve this global crisis today, then we are running a risk of creating a world where there is no prospect for sustaining peace and security.” 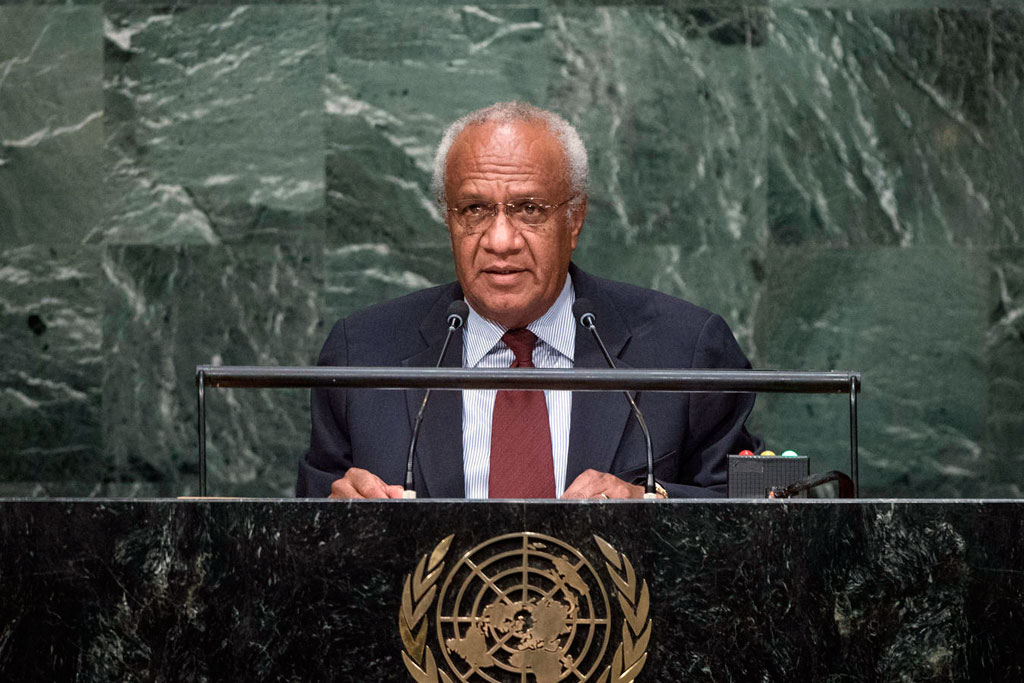 He outlined how, in March this year, his country experienced a category 5 tropical cyclone that affected 60 per cent of the population and 64 per cent of its economy.

“In our current assessment, it will take many years and more than $500 million to rebuild our economy,” he added.

Prime Minister Tuilaepa Lupesoliai Sailele Malielegaoi of Samoa devoted the majority of his address to the General Assembly to the issue of climate change and SDG goal 13, particularly as it pertained to small islands.

He described climate change as “the single most urgent challenge confronting mankind,” adding that it is “facilitated largely through human-induced activities driven for the most part by profit motives, with some degree of insensitivity to the consequences of such action on others.”

He noted that climate change is also a security risk. 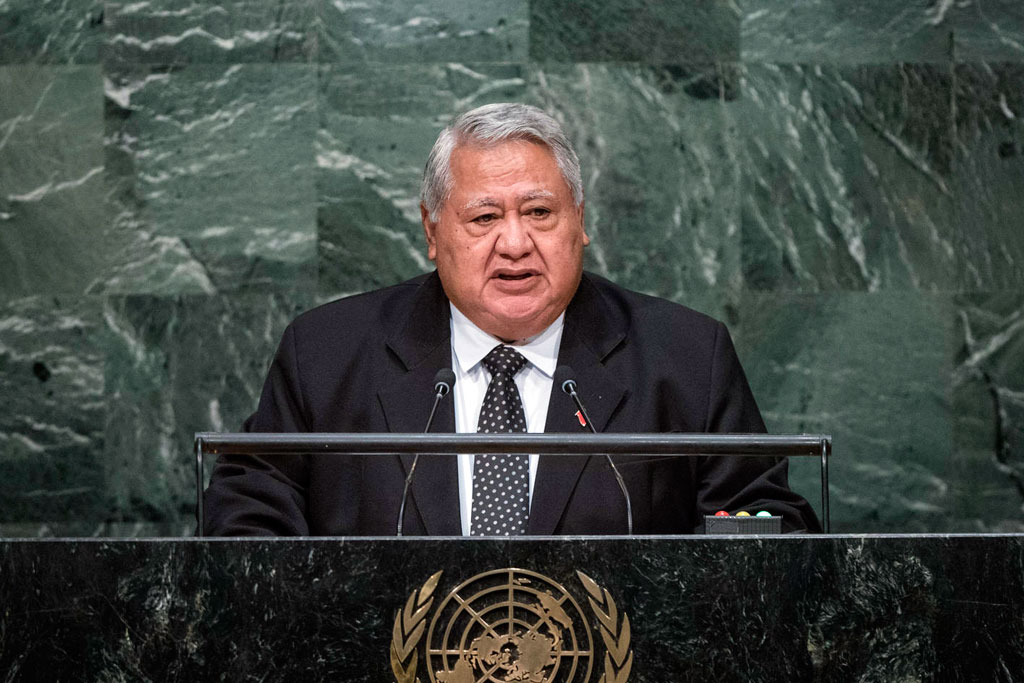 “For some of the low lying Pacific island countries, climate change may well lead to their eventual extinction as sovereign States,” he warned.

“Against the backdrop of the existential threat climate change poses especially to atolls and low lying islands, SIDS have long been advocating for ambitious mitigation efforts by member states with the capacity to do so, and for a global goal of limiting the rise in average global temperature to well below 1.5 degrees Celsius to prevent some of our low-lying islands from being submerged by sea level rise,” he cautioned.

He also noted the importance of the upcoming climate change conference in Paris, emphasizing that it required “a new brand of cooperation and broad outlook.”

“A durable climate change agreement in Paris is therefore a test of multinational solidarity,” he said. “Time is running out.” 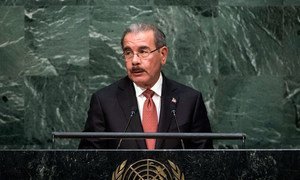 The President of the Dominican Republic, among other leaders of small island developing States addressing the General Assembly today, noted the importance of tackling climate change as a key part of the broader work of ensuring sustainable development for all.