Holding up a photograph at the podium of the General Assembly of three-year old Aylan lying face down on a Turkish beach – the Syrian boy who drowned at the beginning of the month along with his mother and brother – the President of the Council of Ministers of Lebanon reiterated his country’s call to all powers in the world to “end the ongoing massacres.”

He said the picture describes the story of “tormented people, drifting in the seas to nowhere, jam packed on the sidewalks in cities and train stations, waiting for a permission, a visa or simply a meal.”

“If Europe, with its sizeable capacities and generous humanity, has been confused at the sight of thousands of displaced erupting suddenly in its cities, Lebanon, with its limited space and scarce capacities has been crawling for the past four years under the burden of one million and a half displaced Syrians, amounting to one third of its population,” the Lebanese leader added.

He explained that the problem of the displaced is only one facet of the many negative repercussions Lebanon has endured as a result of the neighbouring war – terrorism being the most daunting consequence of this conflict that claimed “steep sacrifices.”

“It is no secret that for more than a year now, a group of our military forces is still held by terrorist groups, and we are still exerting tremendous efforts to free them,” he underlined.

He also indicated that despite the many political crises Lebanon is enduring, chiefly the vacuum on the Presidency of the Republic, the country is proud of being a “paragon of diversity and an oasis of coexistence between members of different religions and sects, at a time of surging Middle Eastern events threatening the social, cultural and religious diversity.”

On the issue of the new agreement between Iran and the five permanent members of the Security Council [United States, France, United Kingdom, China, Russia] and Germany, Prime Minister Salam said it will “open a new page” in international relations and mark the beginning of an improvement “in the regional environments, which will reflect positively on the political situation in Lebanon.”

Meanwhile, thanking all those serving within the UN Interim Force in Lebanon (UNIFIL), he called on the international community to compel Israel to cease its violations of Lebanese sovereignty, cooperate with UNIFIL to demarcate the rest of the Blue Line [separating Israel and Lebanon and the Litani River], and withdraw immediately from the northern Ghajar area, Shebaa Farms and Kfarshuba Hills.

“Lebanon denounces Israel’s continued occupation of Palestinian land and its blockade of the Gaza Strip, and calls upon the international community to compel it to lift this inhuman blockade and secure the conditions for a decent living for the Palestinians,” Prime Minister Salam added.

He further noted that while Lebanon is rejecting the resettlement of refugees on its territory, it is stressing the right of Palestinians to return to their homeland, according to the international resolutions. 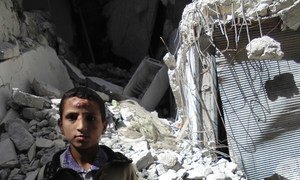 The United Nations Special Envoy on Syria today said the images of the drowned Syrian toddler wearing a red shirt and blue shorts lying face down on a Turkish beach should be a wake-up call to the world that “there is no more time for long political processes,” and it is now time to have “a real discussion” to end the conflict.