UN Photo/Mark Garten (file)
Secretary-General Ban Ki-moon (second left) at a meeting of the representatives of Middle East Quartet (namely, the UN, the United States, the Russian Federation and the European Union).
30 September 2015

The United Nations and its diplomatic partners in the Middle East Quartet today condemned “in the strongest possible terms” violence against Israeli and Palestinian civilians, and reiterated that unilateral actions by either party cannot prejudge the outcome of a negotiated solution.

The grouping – comprising the UN, European Union, Russia and the United States – issued a statement following a meeting held in New York on the margins of the General Assembly’s annual high-level debate.

“The Quartet noted with deep concern recent violence and escalating tensions surrounding the holy sites in Jerusalem and called upon all parties to exercise restraint, refrain from provocative actions and rhetoric, and preserve unchanged the status quo at the holy sites in both word and practice,” said the statement.

It also expressed its serious concern that current trends on the ground – including continued acts of violence against Palestinians and Israelis, ongoing settlement activity, and the high rate of demolitions of Palestinian structures – are “dangerously imperilling the viability of a two-State solution.”

“The Quartet underscored that the status quo is not sustainable and stressed the importance of both sides’ demonstrating, through policies and actions, a genuine commitment to a two-State solution in order to rebuild trust and avoid a cycle of escalation.” 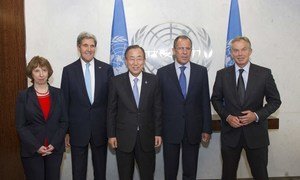 The European Union, United Nations, United States and Russia, representing the diplomatic Quartet on the Middle East Peace Process, have urged the resumption of Israeli-Palestinians negotiations “as soon as possible” and reached out for donor funding to accelerate reconstruction of Gaza “to address the basic needs of the Palestinian population and to ensure stability.”