UNICEF/ Shubuckl
Children, women and men who have fled their homes amid the ongoing refugee and migrant crisis, stand outside small tents in a park next to the bus and train stations in Belgrade, the Serbian capital.
30 September 2015

As the world confronts the biggest refugee and migration crisis since the Second World War, Secretary-General Ban Ki-moon today convened a high-level meeting on the issue and outlined eight guiding principles to improve preparedness.

“We must step up our work to prevent and stop wars and persecution. But we know that conflicts will not disappear overnight. More people will flee crisis, and people will keep moving in search of better opportunities. We must be better prepared,” Mr. Ban told participants.

The meeting, held at United Nations Headquarters on the side-lines of the high-level segment of the UN General Assembly, provides an important opportunity for Member States to discuss the challenges and responsibilities, as well as the opportunities, that large migrant and refugee movements bring.

Mr. Ban outlined eight guiding principles to improve preparedness, beginning with saving lives. “The preservation of life must guide all our efforts, from asylum policies to robust search-and-rescue mechanisms,” he stated.

Also vital is protection; non-discrimination; preparedness to better adjudicate claims; responsibility sharing in terms of boosting the number of refugee resettlement places; better cooperation between countries of origin, transit and destination; managed migration to ensure safe and legal channels for refugees and migrants; anticipating future challenges – including the plight of those escaping areas progressively ravaged by climate change.

“Together, we must translate these principles into reality,” Mr. Ban stressed.

Recalling the haunting photograph of a lifeless Syrian toddler laying on a Turkish beach, the Secretary-General said such an image, while symbolizing deficiencies and failures, can also catalyse solutions.

“Let us make sure that the heartbreaking death of Aylan Kurdi – and so many other nameless tragedies – compel us to move forward together and see the long-term benefits of integrating refugees and migrants.”

The Secretary-General’s Special Representative for International Migration, Peter Sutherland, said the issues being discussed are “issues for humanity” that are not going to go away, and which are likely to grow in the coming period.

Stressing the need for cooperation, he noted that there are still far too many countries which believe in unilateral action to address migration challenges. “Cooperation is central to where we have to go. Those who seek unilateral solutions sometimes rely on sovereignty. But the only way to exercise sovereignty effectively in the day and age in which we live is through cooperation in an interdependent world. If we don’t take that course, then the winners will be those who seek to undermine society and the rule of society which we all claim to wish to uphold,” he stated.

“In the context of migration, the winners will be smugglers, traffickers and unscrupulous employers. Those who lose will be the dispossessed, the hungry, the vulnerable, the defenceless and the children.” 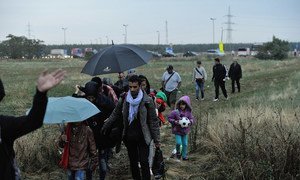 All countries must contribute to solving the global refugee crisis, the President of the United Nations General Assembly said today, underscoring that the international community has an unequivocal obligation towards the women, men and children seeking refuge from conflict and violence.