President of Uruguay Tabaré Vazquez addressed the United Nations General Assembly today, urging decisive action from the world community to find solutions to a raft of global challenges, including migration and the increasing prevalence of noncommunicable diseases.

President of Uruguay Tabaré Vazquez addressed the United Nations General Assembly today, urging decisive action from the world community to find solutions to a raft of global challenges, including migration and the increasing prevalence of noncommunicable diseases.

Prevention, said Mr. Vazquez, is better than cure, and what is needed is to “recognize other people as ourselves and protect all their rights.” He added that democracy is the only form of government that allows people to be full citizens and to protect the planet.

Noting that he used to be a practicing medical doctor, Mr. Vazquez focused much of his address on the issue of public health, which he said was a central component of national sovereignty and “an unavoidable responsibility of States.”

Praising the resumption of diplomatic relations between Cuba and the United States, he said a key element to success was ending the embargo. Uruguay would vote in the General Assembly to do so as it had for many years, he said, adding, “Let’s hope that this is the last time the United Nations will have to take up this issue.”

He recalled that, in 2008, Uruguay had presented its candidacy for non-permanent membership on the Security Council for the period 2016-2017. The country, he said, was a founding Member of the United Nations, and believed that the only way for the Council to fulfil its mandate was on the basis of the UN Charter. He said that Uruguay was a peace-contributing country and would like to bring its experience to the Council. 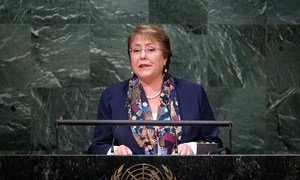 Chilean President Michelle Bachelet, one of several leaders from the Latin American and Caribbean region to address the General Assembly today, warned of the urgent need for United Nations Member States to react to the plight of refugees, which she said had become a global crisis affecting peace and security.