29 September 2015
As momentum continues to build towards abolishing the death penalty, Secretary-General Ban Ki-moon today stressed the need to ensure that the rights of victims and their families are respected as part of efforts to ensure a life of dignity for all.

“The rights of victims and their families must absolutely be respected,” Mr. Ban said in his message to an event on Moving Away from the Death Penalty: The Voices of Victims' Families, delivered by United Nations High Commissioner for Human Rights Zeid Ra’ad Al Hussein.

Critical in this regard, he noted, are the right to see effective investigations and proper retribution for crimes and the right to demand redress for the harm suffered, through judicial and administrative mechanisms that are expeditious, responsive, fair, and accessible.

“This implies that all victims should be fully informed about such processes, which should be inexpensive and allow for the presentation of victims' views and concerns,” Mr. Ban stated.

Seven decades ago, only 14 countries had abolished the death penalty. Today, 82 per cent have either introduced moratoria by law or in practice or have abolished it. Over the past 12 months alone, Fiji, Madagascar, Suriname, and the state of Nebraska in the United States have abolished the practice of putting people to death.

But despite this overarching worldwide trend towards abolition, Mr. Ban said, a small number of countries have increased or resumed executions in recent months.

“Frequently, these policies are justified by authorities invoking the rights of crime victims’ families. In reality, many murder victims’ families believe that responding to one killing with another does not honour the victim.”

The event, held on the margins of the high-level segment of the General Assembly, was organized by the UN human rights office (OHCHR), which noted that a growing body of evidence suggests that, from the perspective of murder victims’ families, the death penalty is harmful and interferes with a difficult healing process.

“A life of dignity for all includes the dignity of victims and their families, who must be acknowledged by all law enforcement and judicial personnel with full compassion and respect. It is also paramount to secure the safety of victims, their families and witnesses from intimidation and reprisal,” said Mr. Ban.

The UN Declaration of Basic Principles of Justice for Victims of Crime and Abuse of Power clearly states these and other rights of victims of crime, and it outlines measures to secure them.

“I call on States to do far more to realize these principles in practice,” said Mr. Ban. “And I urge all States and individuals to join the United Nations as we continue advocating for an end to the imposition of death penalty as part of our larger push for a more just and sustainable future.” 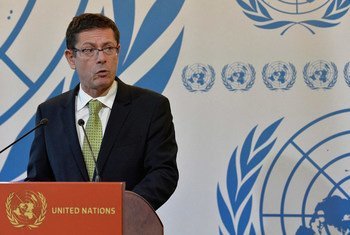 4 March 2015
Despite progress in recent years to universally abolish the death penalty, major challenges persist, the United Nations top human rights official said today at a high-level debate in Geneva, expressing concern that the death penalty, in practice, is “too often applied to the poor and marginalized foot soldiers” rather than the powerful organizers of the drug business.