US Government
Atmospheric nuclear test conducted by the United States on 18 April 1953 at the Nevada Test Site.
29 September 2015

Lamenting the fact that nearly two decades after its negotiation the Comprehensive Nuclear-Test-Ban Treaty (CTBT) has still not entered into force, Secretary-General Ban Ki-moon today urged world leaders gathered at the United Nations to demonstrate the necessary political will to usher in a nuclear-weapon-free world.

“A breakthrough is long overdue,” Mr. Ban said at a conference on facilitating the entry into force of the CTBT, held on the margins of the General Assembly’s high-level debate.

“I welcome all the Treaty’s steadfast supporters here. I am also pleased to see representatives from States that have not yet either signed or ratified the Treaty. I count on you to do so quickly.”

Adopted by the General Assembly in September 1996, the CTBT now has 164 State parties. For the Treaty to enter into force, ratification is required from the so-called Annex 2 States. Of these, China, the Democratic People’s Republic of Korea, Egypt, India, Iran, Israel, Pakistan, and the United States have yet to ratify it.

To the eight remaining Annex 2 States, Mr. Ban said: “You have a special responsibility. You must not wait for others to act before ratifying.”

Noting that more than 20 States not listed in Annex 2 have either not signed or ratified the Treaty, he called on them to take this step as soon as possible.

“We need every person in this room to show leadership on the urgent international imperative of ending nuclear tests,” said the Secretary-General. 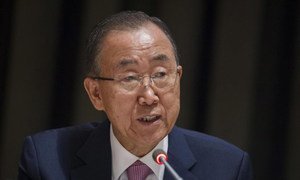 Top United Nations officials today highlighted the existential threat posed by nuclear testing, and called for all States that have not yet done so to sign and ratify the international treaty that seeks to achieve a ban on such testing.