Addressing the growing threat posed by violent extremist groups such as the Islamic State of Iraq and the Levant (ISIL), also known as Da’esh, goes to the heart of the mission of the United Nations and requires a unified response, Secretary-General Ban Ki-moon stressed today at a high-level event held in New York.

“That threat is growing,” he added, noting that recent data shows a 70 per cent increase in foreign terrorist fighters from over 100 countries to regions in conflict.

The Leaders’ Summit on Countering Violent Extremism, hosted by United States President Barack Obama on the margins of the General Assembly’s annual high-level debate, brought together representatives from more than 100 nations, more than 20 multilateral institutions, some 120 civil society groups from around the world, and partners from the private sector.

“Addressing this challenge goes to the heart of the mission of the United Nations, and it requires a unified response,” stated the Secretary-General, who intends to present a comprehensive Plan of Action to Prevent Violent Extremism early next year to the General Assembly.

“Our objective must be to go beyond countering violent extremism to preventing it in the first place,” he added.

In this regard, he outlined five key priorities: the need to engage all of society; the need to make a special effort to reach young people; to build truly accountable institutions; respect for international law and human rights; and the importance of not being ruled by fear – or provoked by those who strive to exploit it.

“We have a major challenge before us – one that will not disappear overnight – but one that we can address concretely by forging societies of inclusion, ensuring lives of dignity, and pursuing this essential endeavour inspired at all times by the United Nations Charter and the Universal Declaration of Human Rights.”

Opening the meeting, President Obama said that it is not going to be enough to defeat ISIL in the battlefield.

“We have to prevent it from radicalizing, recruiting and inspiring others to violence in the first place. And this means defeating their ideology. Ideologies are not defeated with guns, they’re defeated by better ideas – a more attractive and compelling vision.”

Highlighting some of the measures taken by the US, Mr. Obama noted that it is stepping up its efforts to discredit ISIL’s propaganda, especially online, and working to lift up the voices of Muslim scholars, clerics and others – including ISIL defectors – “who courageously stand up to ISIL and its warped interpretations of Islam.”

The US has also recognized the need to confront the economic and political grievances that exist in some of the areas that ISIL seeks to exploit. “The real path to lasting stability and progress is not less democracy; I believe it is more democracy in terms of free speech, and freedom of religion, rule of law, strong civil societies. All that has to play a part in countering violent extremism.”

And in all countries, it is vital to continue to build true partnerships with Muslim communities, based on trust and cooperation, so that they can help protect their loved ones from becoming radicalized, Mr. Obama continued.

“This cannot just be the work of government. It is up to all of us. We have to commit ourselves to build diverse, tolerant, inclusive societies that reject anti-Muslim and anti-immigrant bigotry that creates the divisions, the fear and the resentments upon which extremists can prey.”

Today’s meeting follows the White House Summit on Countering Violent Extremism, held in February in Washington, DC, as well as a high-level meeting of the Security Council held in September 2014 that focused on foreign terrorist fighters. 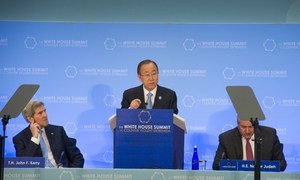