The UN has played a significant role in reducing conflicts on the African continent and in other parts of the world was a message underlined by a number of African leaders who addressed the United Nations General Assembly today during the annual general debate.

“Namibia is a child of international solidarity, midwifed by the United Nations,” Hage G. Geingob, the Namibian President, told world leaders from the podium. “After the termination of South Africa’s mandate over the then South West Africa, the United Nations assumed direct responsibility over Namibia.”

Namibia attained independence in 1990, and, according to President Geingob, was able to develop the necessary building to construct its democracy thanks to the UN.

“We are in the process of establishing a new Africa, with its own narrative as told by its sons and daughters,” the President continued. “Africa has turned a new leaf, bidding farewell to the days of coup d’états and embracing electoral democracy. We as Africans, through the African Union, have ostracized those who come to office through unlawful ways.”

The Namibian leader explained that the recent coup in Burkina Faso is an example of the continent’s zero tolerance policy towards those who come to power through illegal ways, and called for the establishment of processes, systems and institutions to ensure electoral democracy.

The President further noted that Namibia is rated number sixth overall as the best governed country on the African continent by the Mo Ibrahim index of African governance, and number seven in Africa as a “clean country” in terms of corruption by transparency international.

“We are still faced with enormous social disparities between the rich and poor, amongst others,” he warned. “Noticeable is the critical shortage of housing and other basic necessities.”

President Geingob also recalled that on the day he was sworn in as President last March, he announced that the Namibian Government was declaring “all-out war on poverty.”

“I would like to add that one of the most impactful interventions we can make in the war against poverty is through empowering women, who although representing half of the world’s population, account for nearly 70 per cent of the world’s poor,” he stated.

Namibia is currently second to Rwanda in terms of female representation in Parliament, at 47 per cent. 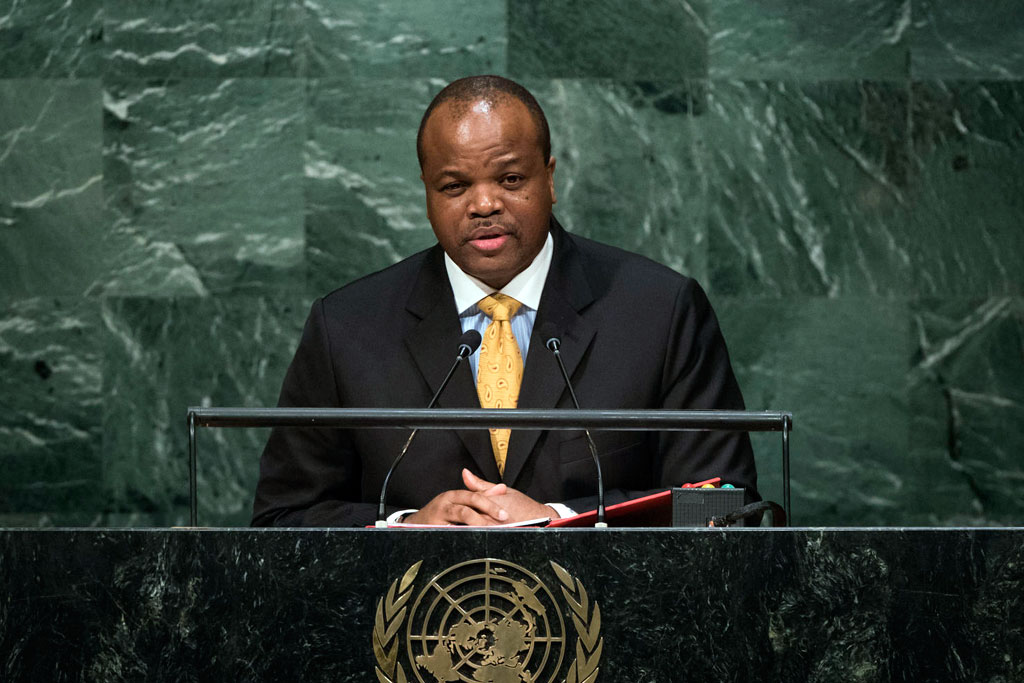 He appealed to the UN to continue helping Africa emerge from the cycle of poverty and disease as the continent seeks to attain the aspirations of its vision 2063, aimed at eradicating poverty and creating prosperity for all.

“Africa has a great potential for investment,” King Mswati III declared. “What remains is creating the requisite environment for economic growth. We strongly believe that the structures of the UN can provide a peaceful global village that is free of fear and violence.”

“We have good reason to anticipate a sustainable transformation of nations over the next 15 years,” he said, adding that Swaziland looks forward to a legally binding global climate agreement at the UN climate change conference (COP21) in France later this year.

He also highlighted that the secret of his Kingdom has been consultation and dialogue to build consensus, describing it as a “model of peace that has a place in the execution of UN operations.”

Also speaking at the podium today was the President of Malawi, Peter Mutharika, who said a complete sense of peace in the world cannot be realized without justice, dignity and freedom. 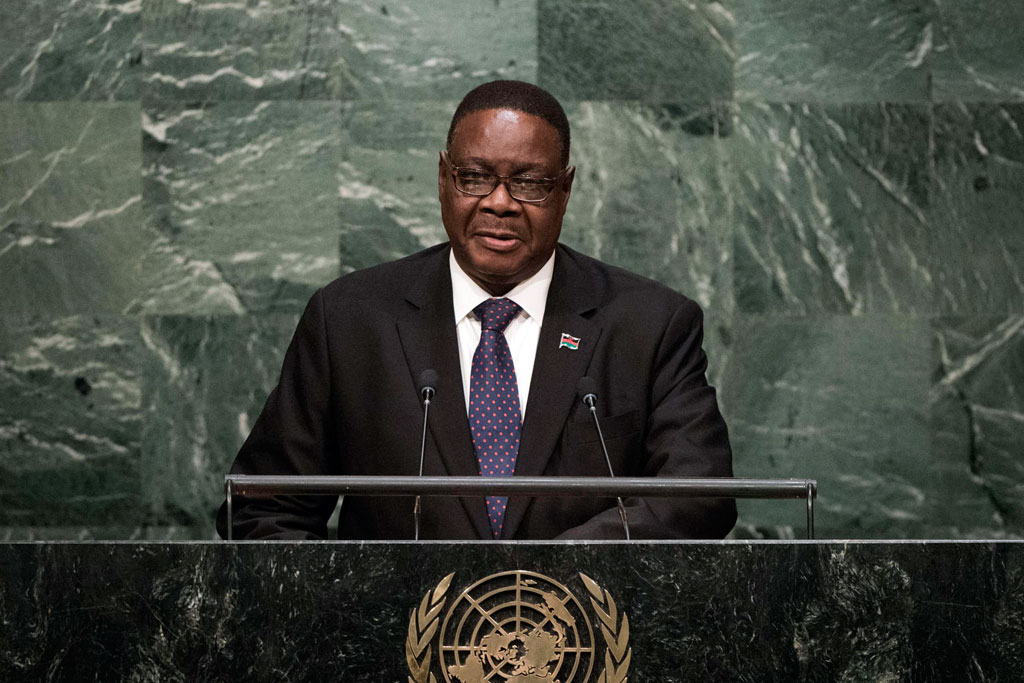 “As we live in this imperfect world, the pursuit for peace should be our main goal if we are to shape a promising world for our future generations,” President Mutharika declared.

Regarding his country’s socioeconomic development, he said it is evident that Malawi is embarking on the implementation of the new post-2015 development agenda with “unfinished business,” despite success in meeting half of the MDGs.

“My Government is grateful to development partners who worked with us to achieve four of the eight Millennium Development Goals namely; reducing child mortality; combating HIV and AIDS, Malaria and other diseases; ensuring environmental sustainability; and developing a global partnership for development.”

On the global goal of ending AIDS as a public health threat by 2030, President Mutharika underlined that reaching that goal will require enhancing the capacity of developing countries such as Malawi to manufacture drugs and make them more available.

He also highlighted his Government’s commitment to the He-for-She campaign, launched by UN Women to address gender inequalities and end gender-based violence.

Finally, he noted that to “strike a massive blow at poverty” and achieve the SDGs, the world needs improved and increased access to higher education; yet, he expressed that he doesn’t find SDG 4 – ensuring inclusive and equitable quality education and promoting lifelong learning – to “fully capture the centrality of higher education.”

Meanwhile, the President of Tanzania, Jakaya Mrisho Kikwete, underlined that most of the conflicts the world is witnessing today are being handled, first and foremost, by regional and sub-regional organizations. 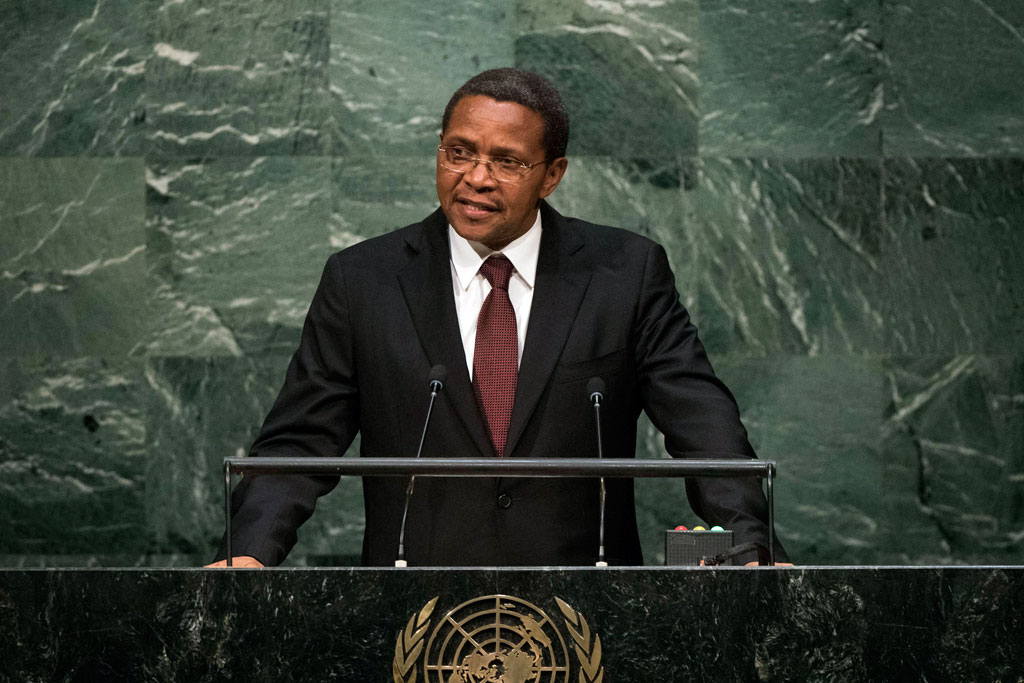 “The UN, therefore, must seek to forge strategic partnership with these organizations,” urged President Kikwete.

“Where and when appropriate, the United Nations should invest in strengthening the capacity of these organizations and their member states, in anticipating, detecting, preventing, managing and resolving conflicts. I am of the view that this capacity is urgently needed in Africa.”

On the issue of peacekeeping, he noted that Tanzania is proud to have contributed 1,322 troops out of the 125,000 women and men deployed across 16 UN peacekeeping missions worldwide, adding that his country is ready to contribute more if requested.

The Tanzanian leader also announced it would be his last time speaking to the General Assembly as he is about to leave office at the completion of his two term mandate.

Taking the podium in the afternoon for the first time was recently elected Zambian President Edgar Chagwa Lungu. 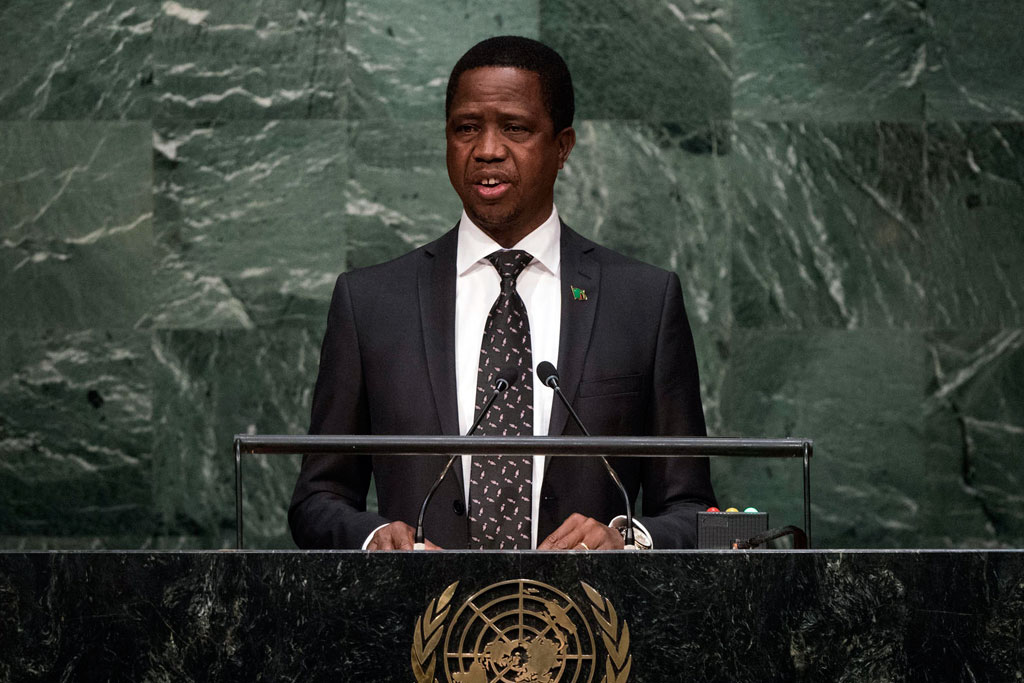 “I thank the people of Zambia for being true champions of democracy,” President Chagwa stated, noting however that his country is concerned that the gears to advance the three pillars of the UN Charter [human rights, development, peace and security] are moving “at a very slow pace; a pace with the potential of negating the gains we have achieved so far.”

“Seventy years of the United Nations has seen more conflicts in Africa than any other continent,” he stressed. “Yet, the same 70 years characterizes Africa’s absolute exclusion from decision-making in the UN Security Council where a significant part of the agenda concerns the continent.”

President Chagwa also insisted that special attention be paid to gender and women’s empowerment, and that Zambia acknowledges that gender-based violence extends to most nations, including its own.

He announced that his Government will soon be launching the USAID-supported “Boys-to-Men” project targeting the 15-21 age group, to encourage the development of a non-violent generation.

In her remarks Aja Isatou Njie-Saidy, Vice-President of Gambia, said there had never been a greater moment for the Organization to respond to the increasing complexity of threats to peace and stability. The UN must craft and implement critical resolutions for the sustenance of better lives for all. In order to establish world peace and security, all UN Member States must be promptly and severely reprimanded for any violations of the Sustainable Development Agenda. 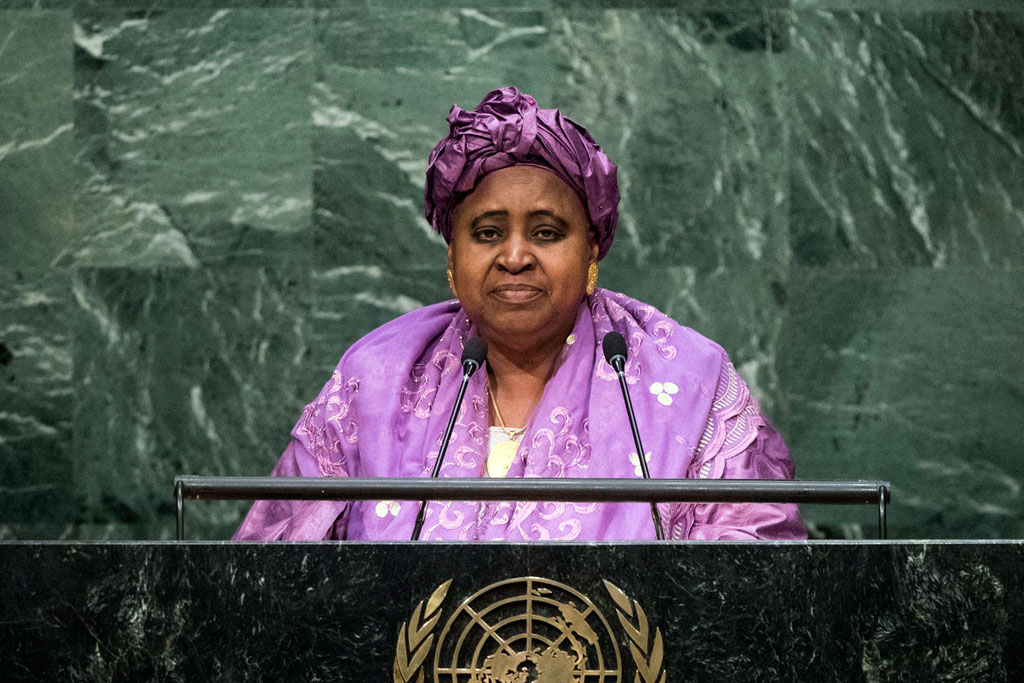 She went on to say that the United Nations must act with greater resolve in promoting sustainable production and consumption patterns and in reducing man-made disasters. She was also among the many African leaders to weigh in on the intergovernmental negotiations on reforming the Security Council, which she said must be driven by Member States themselves, acknowledging the need to increase representation of African nations through two permanent and two non-permanent seats.

Habib Essid, Head of Government of Tunisia, told the Assembly that his country had witnessed important work in its democratic transition, where growing political awareness allowed stakeholders to employ dialogue to resolve its problems. Legislative and presidential elections had produced robust institutions that were focusing attention on policies and programmes aimed at promoting social and economic development. National guidelines on ensuring sustainable development had been crafted in the interest of the people and the country in alignment with the global agenda. 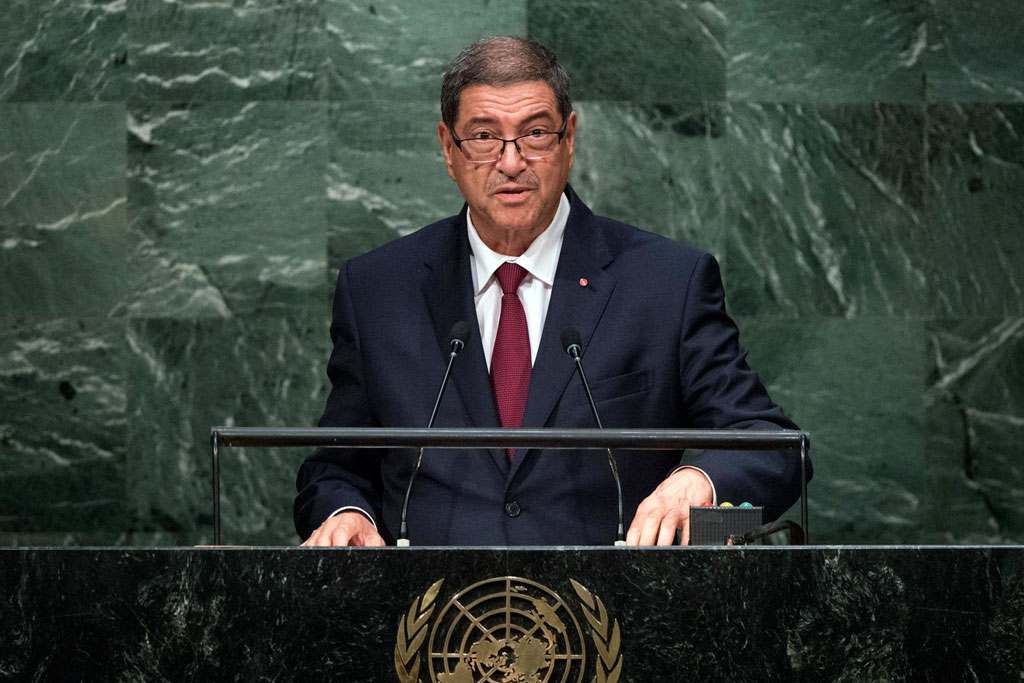 Habib Essid, Head of Government of the Republic of Tunisia, addresses the general debate of the General Assembly’s seventieth session. UN Photo/Cia Pak

Although Tunisia had made great strides in countering terrorism, it was the victim recently of two “heinous attacks” aimed at undermining the country’s culture of tolerance as well as the economy. Tunisia’s counter-terrorism strategy went beyond a military dimension and sought to address root causes through bilateral and multilateral cooperation and coordination. “The escalation of conflicts across the globe – regardless of the reasons – is a source of concern and requires greater international partnership,” he declared.

Also addressing the Assembly, Hamadi Ould Meimou, Minister of Foreign Affairs of Mauritania said that his country had participated in UN peacekeeping operations and was preparing to dispatch a battalion aimed at helping establish peace in the Central African Republic (CAR).

He said that his Government was following with “grave concern” the dire crises in both Yemen and Syria, and he said the Government was also calling on the parties in Libya would take greater strides to establish the rule of law for the benefit of all the Libyan people. 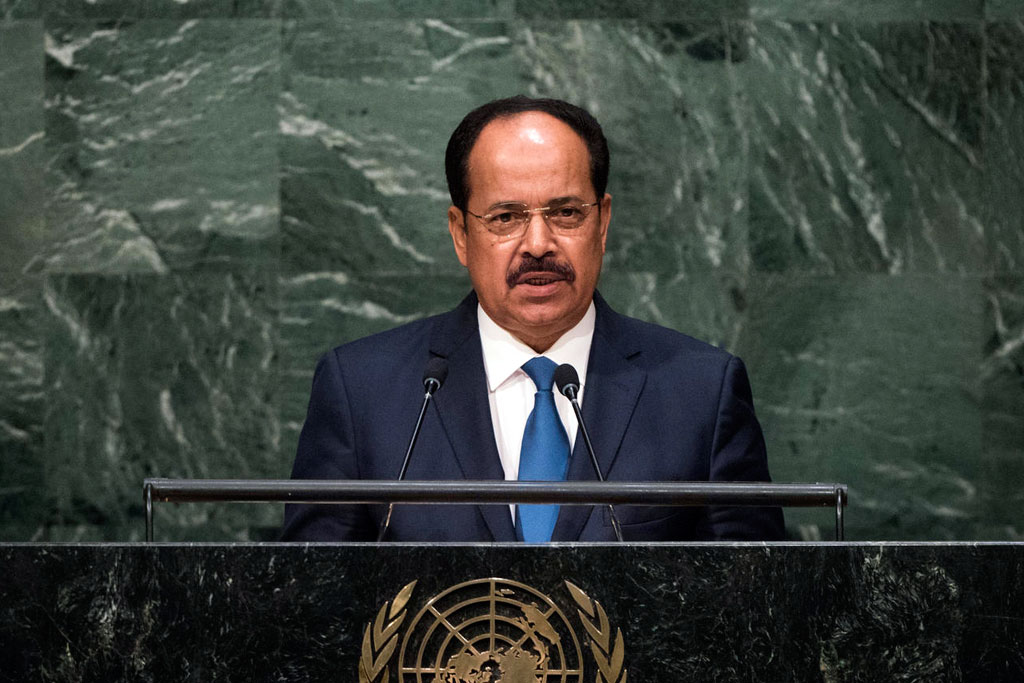 Turning to the African continent, he said that myriad development programmes and strategies that had been implemented had not achieved the desired goals. Indeed, the continent faced pockets of deep poverty and conflict. Some regions had recently been hit with the Ebola virus, which had exposed the fragility of their healthcare systems.

African leaders speaking at the UN General Assembly debate today noted that their countries were guided by the Millennium Development Goals (MDGs) over the last 15 years, and that the post-2015 development agenda and the new goals adopted last week, embody the collective ambition to transform the world by 2030.