Following yesterday’s attack by the Taliban in the Afghan city of Kunduz, the United Nations High Commissioner for Human Rights today urged both parties to the conflict to take all measures to protect civilians from harm.

“The civilian population in Kunduz has already suffered months of fighting and is now in grave danger – with very worrying signs that the violence may intensify,” Zeid Ra’ad Al Hussein said in a news release.

“I urge all parties to the conflict to uphold their obligations under international humanitarian and human rights law to protect civilians and to take all feasible steps to prevent the loss of life and injuries to civilians.”

The attack sparked ground engagements throughout the city between the Taliban and Afghan National Security Forces. Pro-Government forces also carried out airstrikes in certain parts of the city. The UN presence in Afghanistan received additional reports of fighting in Takhar province, which borders Kunduz province.

“The situation in Kunduz threatens to severely undermine the progress Afghanistan has made in restoring peace, stability and the rule of law, which is what all Afghans deserve,” said the High Commissioner.

The UN Assistance Mission in Afghanistan (UNAMA) and the UN Human Rights Office (OHCHR) are seeking to verify reports that at least 110 civilians were killed and injured as a result of the fighting.

“We fear that many more civilians may be harmed if fighting continues over the next few days,” High Commissioner Zeid stated.

Intense fighting around Kunduz between April and June resulted in 36 deaths and 140 people injured – 64 per cent of which resulted from the operations of pro-Government forces countering the Taliban.

“We are aware the Taliban leadership has directed its forces to protect civilian lives and property, but there are disturbing signs that these commitments are being breached,” the High Commissioner said.

“International law upholds the protected status of healthcare facilities and personnel, preserves humanitarian space and requires that those who have laid down their arms, are injured, detained or otherwise hors de combat, must be treated humanely.” 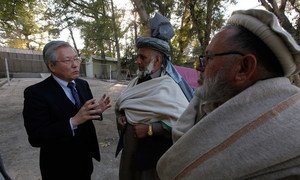 The United Nations Assistance Mission in Afghanistan (UNAMA) condemned Sunday’s suicide attack at a volleyball game in the south-eastern province of Paktika that killed at least 17 civilians and injured at least 60 more, most of them children.