Decrying capitalism and the predatory polices of multinational corporations, the President of Bolivia, in his address to the United Nations General Assembly today, called for all countries to reject the imperialist models that lead to poverty and inequality and to take up the philosophy of ‘living well’ – the key to sustainable development and social justice.

Evo Morales said it was important to carry out a deep examination of political, economic, social and cultural transformations over the 70 years of the life of the United Nations. It was clear that wars and invasions had continued during that time, as oligarchs fought to keep power and wealth in the hands of a few to the detriment of the many. Indeed, while speakers today in the Assembly had said they sought peace, what was true is that there could be no peace without social justice.

Some of those same speakers pursued capitalism, which was a failed model that had ultimately sparked a raft of crises – humanitarian, economic and environmental. Some governments claimed to be spending billions of dollars to save Mother Earth, but they were really spending those billions on military aims which would ultimately lead to the destruction of the planet.

“We are convinced that capitalism is not the solution for humanity,” said President Morales, stressing that the principle of “living well” – living in solidarity and complimentarity, at one with Mother Earth – is the key for humanity. This is the exact opposite of capitalism, he said, adding that “living well” also ensured that basic services and natural resources belonged to all people, not private companies. “This is how we freed ourselves economically,” he declared.

He went on to say that his Government was shouldering its responsibilities to save Mother Earth, and to that end, all countries, especially in the lead-up to the Paris climate conference, must shoulder their responsibilities. Bolivia was hosting a conference of social movements from 10-12 October to show the world that some were not following policies of the North American empire. This empire, which claimed to be democratic, was actually being governed by big business, not the people.

“The only way to end poverty and all the other serious problems facing humankind is to do away with capitalism,” said President Morales, stressing that globalization should be for all people. The exploitation of human beings and pillaging of natural resources must end, as should wars aimed at securing access to those resources, he said. 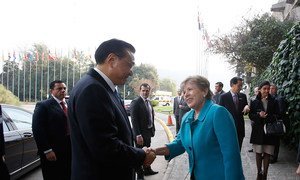 The head of the United Nations’ regional commission in Latin America and the Caribbean has met with the Premier of China, and looked forward to greater cooperation and a deeper relationship with the Asian country.