Addressing the General Assembly today, President of Zimbabwe Robert Mugabe condemned sanctions against his country imposed by the European Union and the United States and called for broad scale reform of the United Nations and its institutions.

“We invite other countries with which we may have differences of whatever nature to eschew threats, pressures and punitive actions, in favour of reconciliation, friendship and dialogue,” said Mr. Mugabe.

“I therefore denounce, in the strongest terms, the illegal sanctions that are imposed on my country by the European Union and the USA and call for their immediate and unconditional removal,” he continued.

He also touched on the question of Security Council reform, saying that he reiterated Africa’s common position on its reform.

“We are disappointed that we have lost the opportunity of this anniversary [of the United Nations] to address this burning issue of the reform of the UN Security Council in a manner that satisfies the just demands and expectations of the majority of us,” he said.

Turning to the subject of human rights, Mr. Mugabe said that, while respecting and upholding those rights was the obligation of all states, he rejected attempts “to prescribe ‘new rights’ that are contrary to our values, norms, traditions and beliefs.”

The President of Zimbabwe also spoke of the refugee crisis in the Middle East and beyond.

“For some months now, we have watched heartbreaking and harrowing scenes of desperate refugees seeking to enter Europe,” he said. “This tragic situation could have been avoided through the respect of the independence of other countries and non-interference in their internal affairs,” he added. 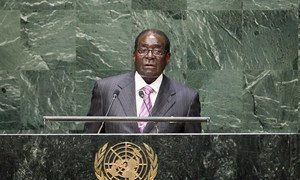 President Mugabe urges those harbouring ill will for Zimbabwe to cast aside hostility, ‘open new chapter’

Addressing the General Assembly today, Robert Mugabe, President of Zimbabwe, said social justice, political stability and sustainable development in African countries could best be achieved through genuine and committed support for the ownership of means of production that favour the poor.