Underscoring that the veto power belonging to the Council’s five permanent members must not be used for national ends, he supported France’s initiative to restrict the veto in cases of serious violations of international law and war crimes.

President Peña Nieto went on to recall the long history of collaboration between his country and the United Nations and noted, for example, its decision to participate in peacekeeping operations and Mexico’s efforts to bolster humanitarian assistance.

Turning to the situation of migrants, he said movements of people in search of a better life was the norm in today’s world, however, in all continents, the migrant experience had been one of risks, discrimination, and abuse, made worse by ignorance, racism or pure political opportunism.

“Let us not allow that injustice to continue,” he urged, adding that the world community must be united in its effort to create a global scheme to protect migrants’ rights. Millions of migrants required a global response – a response that should come from the United Nations.

President Peña Nieto said that humanity must also reassess its vision of the global drug problem, which required a more just and humane international response. During the Assembly’s special session next year, there must be a collective willingness to “reverse inertia” and develop people-centred policies. Keeping a watchful eye over the principles that gave birth to the United Nations was the responsibility of all, he said, urging Member States to work together to build a better future. 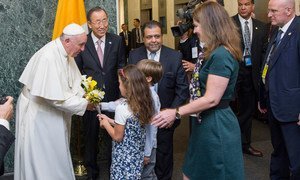