Leaders of more than 50 countries gathered for a summit on United Nations peacekeeping operations today to pledge new commitments and strengthen existing capabilities, with Secretary-General Ban Ki-moon saying “the demand for peacekeeping has never been greater.”

“We are here together to strengthen United Nations peacekeeping in concrete and meaningful ways,” Mr. Ban told the Leaders’ Summit on Peacekeeping, held at UN Headquarters on the margins of the annual high-level debate of the General Assembly.

The Summit, convened by President Barack Obama of the United States, comes at a time when peacekeeping missions are unprecedented in scale of operation and scope of mandates with 125,000 troops, police and civilian personnel in 16 operations spanning four continents.

“These numbers show peacekeeping’s value,” he said, “but are also a sign of troubled times.”

Saying that “the demand for peacekeeping has never been greater,” he also said “the situations into which peacekeepers are deployed have never been more challenging, as tasks multiply and we face extremists, criminal groups and others who show no regard for international humanitarian or human rights law.”

To ensure that UN peacekeeping is up to these and future challenges, Mr. Ban spoke of the need “to act urgently, boldly and collectively” to have predictable and effective military capabilities, a qualified police personnel, including more female officers, and a standby reserve for tomorrow.

He also reminded the participants of the need to prevent and punish sexual exploitation and abuse, and said he counted on all troop- and police-contributing countries to act swiftly and decisively to hold perpetrators to account.

“Those who serve in peace operations must never prey on the people they are meant to protect,” he said.

More than 50 heads of State and government signed up to announce new pledges and recommit themselves to modernizing UN peacekeeping operations through helping to meet persistent capacity gaps, improve the performance and capabilities of uniformed personnel, support rapid deployment and reinforce and enhance the foundation for future peacekeeping efforts.“We are here today, together, to strengthen and reform UN peacekeeping because our common security demands it,” Mr. Obama said in his opening remarks. “This is not something that we do for others; this is something that we do collectively because our collective security depends on it.”

He went on to say that by providing the necessary support and embracing reforms, UN peace operations can be strengthened for decades to come.

“Because we know – we can be certain – that in the years ahead, as conflicts arise, the call will go out to those men and women in blue helmets to restore calm, and to keep the peace, and to save lives. And when they go, their success and their lives will depend on whether they have the training and the forces and the capabilities and the global support they need to succeed in their mission.

“The decisions and the commitments we make today can help ensure that they do.” 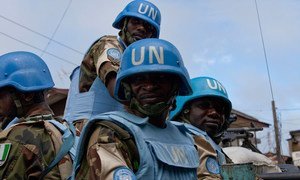 More than one million military, police and civilian personnel have served as United Nations peacekeepers over the years, and despite growing security threats and the sacrifices that come with being deployed in challenging environments, over 100,000 men and women continue to work for the cause of peace.