In his address to the United Nations General Assembly’s annual gathering of world leaders, the President of China warned that the security of all countries was interrelated and that no country could protect its security alone and none could find stability at the expense of another’s.

“We must abandon the Cold War mentality,” said President Xi Jinping, urging a holistic approach to both conventional and unconventional security threats, and also noting that globalization and increased connectivity had created “unprecedented opportunity.”

President Xi also urged a renewed commitment to the UN Charter, noting that China was the first country to sign it, and highlighted its underpinning of the belief of the sovereign equality of States. He called for a new form of international relations, where countries forged alliances and all countries were treated equally, regardless of their size.

He also highlighted the importance of the new development agenda.

“With close to 800 million people still living in extreme poverty, nearly 6 million children dying before the age of five and 60 million unable to attend school, the new development Agenda must be turned into action,” he said, adding that “all economies should build on a sound global eco-environment, and green, low-carbon circular sustainable development should be pursued.”

President Xi said China would honour its commitments to mitigate climate change, and he urged developed countries to do the same.

He also said that China supported a greater voice for developing countries, particularly those in Africa, in global governance. China will also establish a $1 billion, 10-year China Peace Development Fund for the UN and join the new UN peacekeeping system. The nation would establish an 8,000 troop stand-by peacekeeping force, and would give $100 million to the Africa Union to establish its own stand-by force.

“Let us establish a new win-win partnership for all mankind. Let prosperity, fairness and justice spread across the world,” he said. 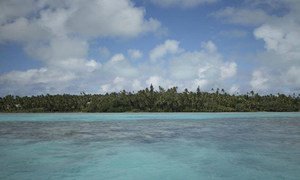 United Nations Secretary-General Ban Ki-moon has commended the joint announcement made today by the Governments of China and the United States on the significant steps each country is aiming to take to address climate change.