Western European leaders, taking the podium of the United Nations General Assembly on the opening day of 70th annual General Debate, today deplored the brutal abuses by Governments and terrorists that have, as in the case of Syria, driven millions of people from their homes.

King Willem-Alexander of the Netherlands praised the UN for its 70-year role in producing a better world, from its role in halving extreme poverty to its peacekeeping.

“What would today's world look like without the United Nations?” he asked the assembled heads of State and Government. “There can be no doubt we would be worse off.”

He deplored the “the tragic images” of families forced to flee their countries and leave everything behind in their search for a safe haven because the “despicable conduct” of tyrants, noting that the Netherlands has again increased its humanitarian aid, making it one of the largest donors in the world.

“We call on other nations to follow suit and give additional support to the UN so it can provide food and shelter to all those who have been forced to flee, and give them a chance to rebuild their lives,” he said.

Portuguese President Aníbal António Cavaco Silva stressed that no conflict, “no matter how complex it may be, may possibly justify barbarism, whether by States or by non-State parties, noting that human rights are the common heritage of all that must be defended regardless of geography. 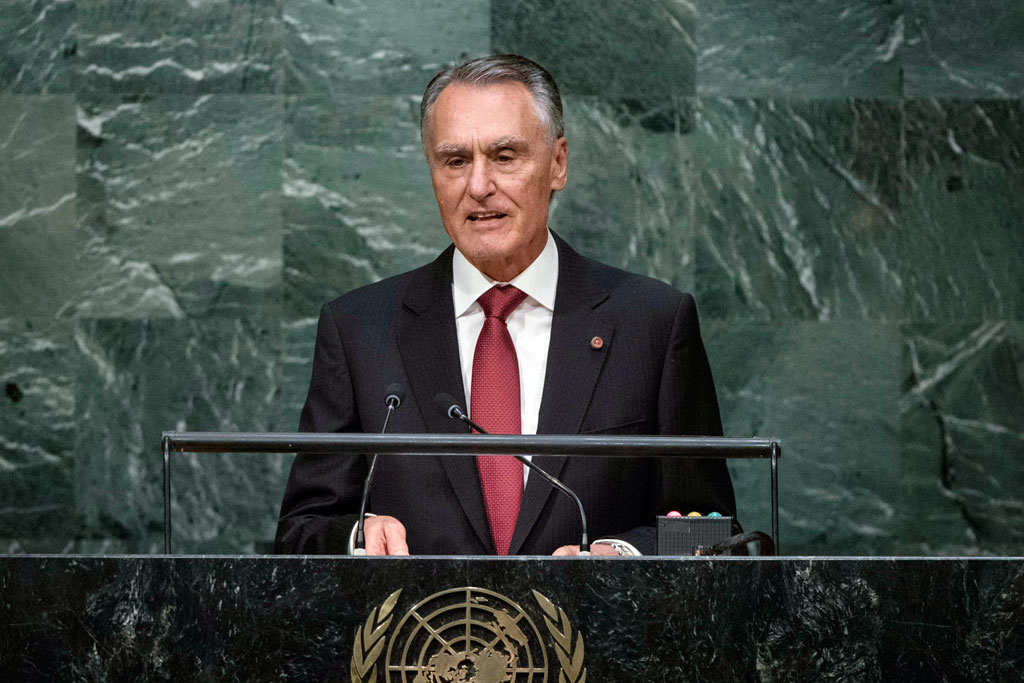 “The tragic humanitarian situation in Syria, Iraq, Libya and in many other conflict settings should prompt us to act in a supportive and responsible manner,” he said, praising the UN refugee agency for its humanitarian aid and calling for “strong, concerted responses and a determined fight by the international community” against terrorism.

He also hailed the adoption by a UN summit last week of Agenda 2030 for Sustainable Development, called for “a lasting agreement that is global, fair and binding on all” to be reached at the Paris summit on climate change in December, and urged that the UN Security Council, now restricted to 15 members, be expanded “to mirror the realities of our world.”

For his part, Lars Løkke Rasmussen, Prime Minister of Denmark said that mass migration is obviously an immense “challenge for our societies; for our international cooperation and our solidarity. First and foremost, mass migration is a global challenge. We must address the root causes.” 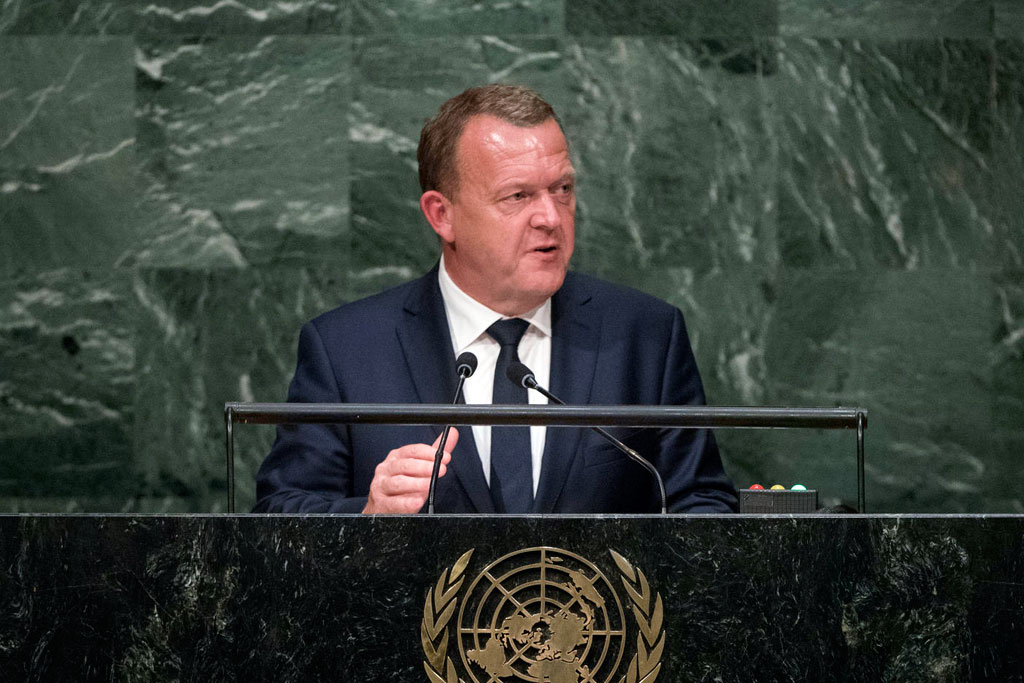 People migrate because they have lost hope at home, he said and inclusive economic growth in developing countries should be a common goal. “There are no easy solutions. The UN is an important part of the answer,” he said, stressing that while Member States have the primary responsibility for development and progress in their own countries, “we must all do our part and provide the necessary financial contributions to ensure that they succeed.”

Denmark, he said, was ready to do its part and remained to the UN target of 0.7 percent target of gross national index (GNI) for official development assistance (ODA). In addition, Prime Minister Rasmussen’s Government had just last week decided to allocate some 100 million euros to humanitarian assistance and to measures that support the European efforts to address the mass migration from Syria and its neighbourhood.

Swiss President Simonetta Sommaruga called for joint action in tackling the current refugee crisis in the Middle East and in Europe. “If each of us only looks after its own interests, we all lose out in the end: The migrants lose out and the solidarity between states falls by the wayside,” she warned. “We will all be judged on how we respond to this dramatic humanitarian challenge.” 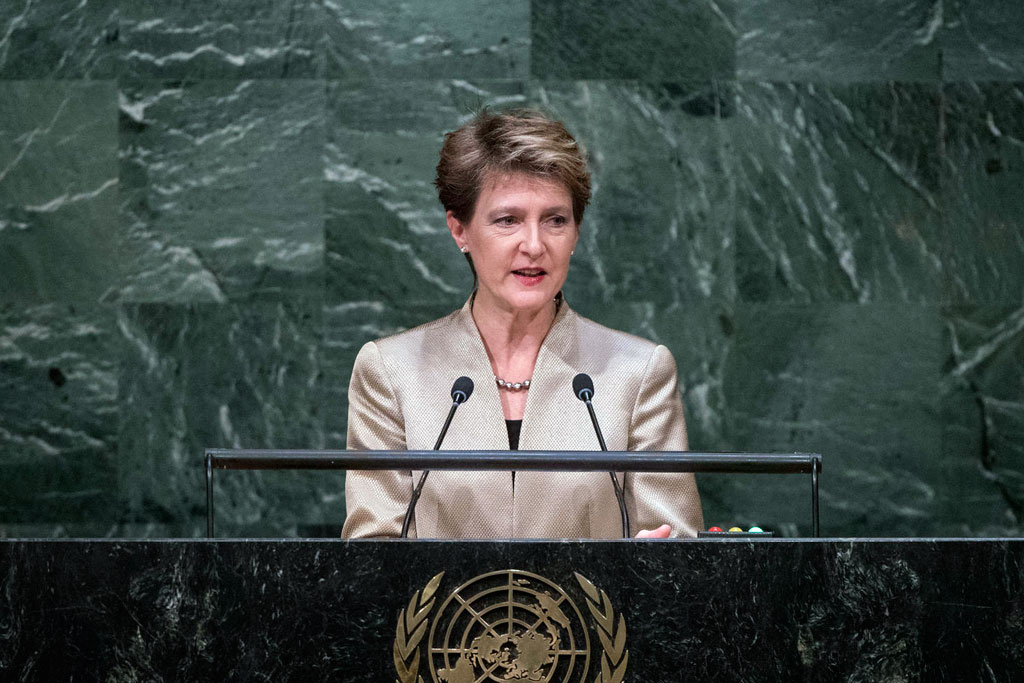 While acknowledging that the UN has made much progress in reducing poverty and peacekeeping, she stressed that much more needed to be done.

“The fact that nearly 120,000 personnel are currently active in UN peacekeeping missions means that there are still far too many crises and wars in this world. We have 60 million displaced persons worldwide, more than at any time since the UN was founded,” she said, also warning that that many countries remain in abject poverty despite their natural wealth.

“As we all know, when dealing with poverty and migration challenges, conflicts, terrorism, organised crime and climate change, collective action is vital to meet the needs of states and their citizens,” she declared.

“The UN is more necessary than ever. What we need is a "strong UN for a better world". States get the UN they deserve. It is up to us to strengthen it!”