Stressing the unique legitimacy, representation and universality of the United Nations, Russian President Vladimir Putin warned today that many of the crises facing the world have been exacerbated by countries acting against sovereign States outside the UN Charter.

“We consider the attempts to undermine the authority and legitimacy of the United Nations as extremely dangerous,” he told the General Debate on the opening day of the high-level segment of the Assembly’s 70th annual session, citing United States sanctions against Russia over Ukraine and calling for full support for the Syrian Government in its war against terrorism.

In a wide-ranging speech in which he also proposed the formation in accordance with the UN Charter of a broad international coalition against terrorism and the harmonization of regional economic projects, Mr. Putin emphasized the diversity of models among UN Member States and the vital importance of respecting State sovereignty.

“Ensuring peace and regional and global stability remains the key objective of the international community, with the UN at its helm,” Mr. Putin declared. “We believe this means creating a space of equal and indivisible security which is not for the select few, but for everyone.”

Turning to specific issues, he said aggressive foreign interference that in the Middle East and North Africa has resulted in a flagrant destruction of national institutions rather than bringing about reforms, opening the way for tens of thousands of terrorists and extremists to fill the vacuum under the banner of the so-called Islamic State. 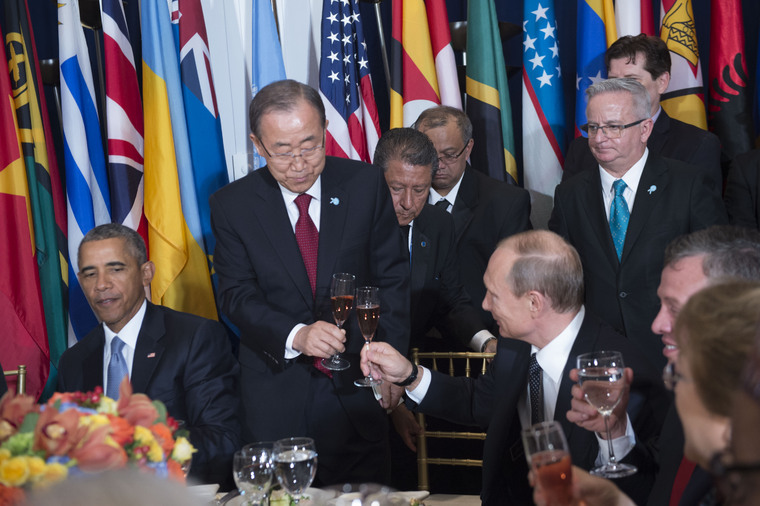 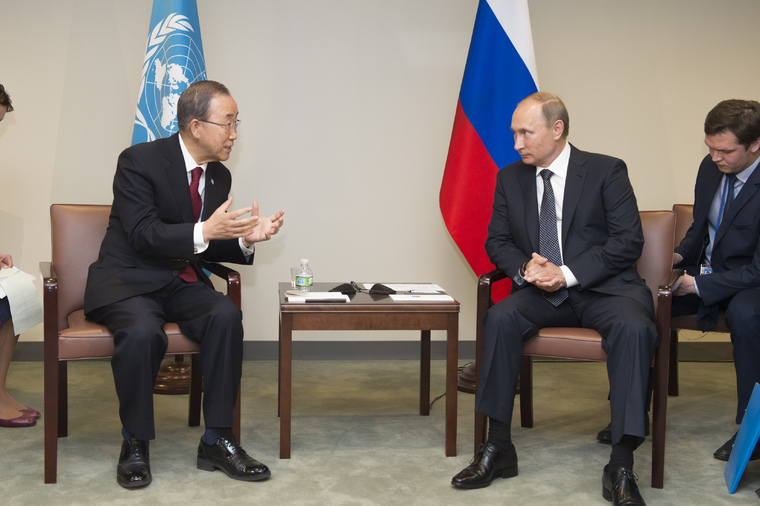 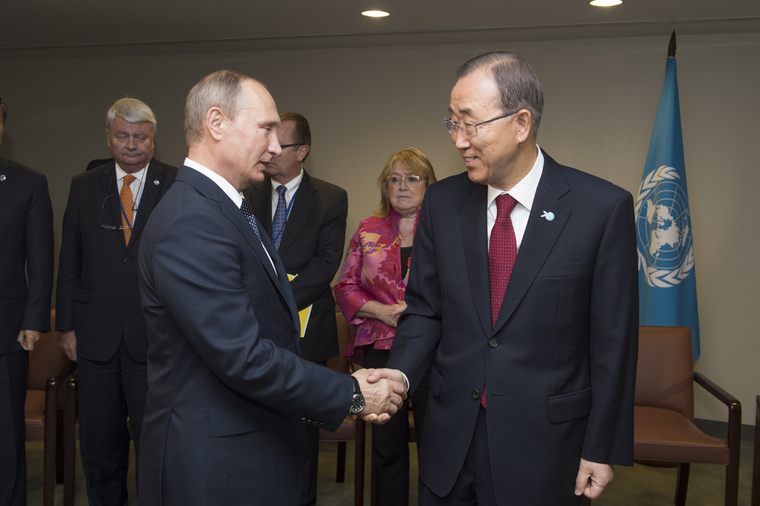 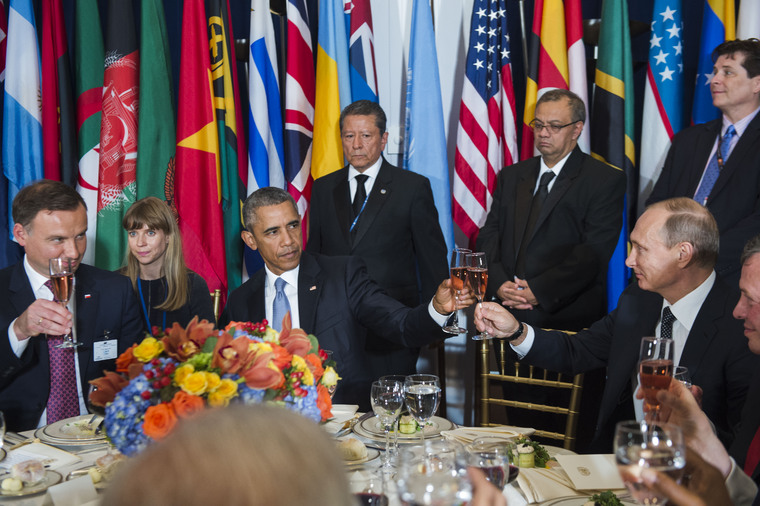 Russian President Vladimir Putin and US President Barack Obama share a toast at a luncheon hosted by Secretary-General Ban Ki-moon in honour of world leaders attending the general debate of the General Assembly. UN Photo/Amanda Voisard

“We think it is an enormous mistake to refuse to cooperate with the Syrian Government and its Armed Forces, who are valiantly fighting terrorism face-to-face,” he said, noting the danger posed by foreign Islamic State recruits from Europe and Russia if they returned to their homelands.

“We should finally acknowledge that no one but President (Bashar al-) Assad’s Armed Forces and Kurd militia are truly fighting the Islamic State and other terrorist organizations in Syria.”

As current President of the Security Council, Russia will convene a ministerial meeting to propose agreement on a resolution to coordinate the actions of all the forces against the Islamic State and other terrorist organizations based on the principles of the UN Charter, he added.

Closer to home, Mr. Putin denounced United States sanctions on Russia over the annexation of Crimea and the fighting in eastern Ukraine as unilateral and circumventing the UN Charter, charging some “colleagues” with “thinking of the times of the cold war and the desire to explore new geopolitical areas.”

Hence they expanded NATO’s military infrastructure, offering post-Soviet countries a false choice – either to be with the West, or with the East.

“Sooner or later this logic of confrontation was bound to spark off a grave geopolitical crisis,” he said. “This is exactly what happened in Ukraine where the discontent of population with the current authorities was used and a military coup was orchestrated from outside that triggered a civil war as a result.”

He called for genuine consideration for the interests and rights of the people in eastern Ukraine to guarantee that the country will develop as an essential link in building a common space of security and economic cooperation both in Europe and in Eurasia.

Mr. Putin also stressed the importance of ensuring that UN Climate Change Conference in December in Paris is a success, noting that Russia plans to reduce by 2030 greenhouse gas emissions to 70-75 per cent of the 1990 level, and offering to co­sponsor a special forum under the UN auspices on depletion of natural resources, destruction of habitat and climate change.

“Russia believes in the huge potential of the United Nations which should help us avoid a new global confrontation and engage in strategic cooperation,” he concluded. “Together with other countries, we will consistently work towards strengthening the central coordinating role of the UN.”

Secretary-General Ban Ki-moon, in Russia for 'Victory Day' marking 70 years since the end of the Second World War in Europe and the sacrifice made by millions, met for discussions with President Vladimir Putin on world issues from the conflict in Ukraine to enhancing cooperation to tackle climate change.