The global drug problem violates human rights in five key areas – the right to health, the rights relating to criminal justice and discrimination, the rights of the child and the rights of indigenous peoples, a senior United Nations official said today.

“It is clear that the world’s drug problem impacts the enjoyment of a wide range of human rights, often resulting in serious violations,” said Flavia Pansieri, Deputy High Commissioner for Human Rights.

“It is, nevertheless, a positive development that human rights are increasingly being taken into account in the preparations for the General Assembly’s Special Session on the world drug problem to be held in April 2016,” she said.

Ms. Pansieri made the remarks during her presentation of the report by the High Commissioner for Human Rights during a panel discussion on issues related to human rights and drug policy taking place on the side lines of the 30th session of the Human Rights Council underway in Geneva, Switzerland.

She said “the report addresses the impact of the world drug problem in five main areas: the right to health, rights relating to criminal justice, the prohibition of discrimination including, in particular against ethnic minorities and women, the rights of the child and the rights of indigenous peoples.”

On the right to health, she said the report therefore encourages States to embrace harm reduction approaches when dealing with drug dependent persons.

“Today, such measures, including syringe exchange programmes and opioid substitution therapy, are available in slightly less than half of countries worldwide,” she said.

On issues relating to criminal justice, she said an estimated 33 countries or territories continue to impose the death penalty for drug-related offences, resulting in approximately 1,000 executions.

While in some States, convictions for drug-related offences result in disproportionately harsh sentences for relatively minor offences, and adversely affect a range of rights or entitlement to benefits, she noted that “ethnic minorities and women may be particularly subject to discrimination in law enforcement efforts.”

“Children should be protected by focusing on prevention,” she said, “and should receive accurate and objective information on drugs in a child-friendly and age appropriate manner.”

And finally, concerning the rights of indigenous peoples, “they have the right to follow their traditional, cultural and religious practices, and where drug use is part of these practices, it should in principle be permitted.” 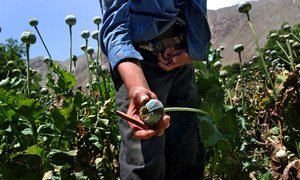 The international community must seize the opportunity to hold open, comprehensive and in-depth discussions on the world drug problem at next year’s General Assembly special session devoted to the issue, a senior United Nations official said today amid appeals for a clampdown on transnational drug trafficking networks and their criminal offshoots.