FAO/Asim Hafeez
Highly hazardous pesticides should be phased out because it has proven very difficult to ensure proper handling.
28 September 2015

Two independent United Nations human rights experts today called for an immediate worldwide phase-out on use of highly hazardous pesticides that are inflicting significant damage on human health and the environment.

“Workers, children and others at risk continue to suffer severe impacts from hazardous pesticides,” the Special Rapporteur on human rights and hazardous substance and waste, Baskut Tuncak, said in a news release. “Those living in danger cannot wait several years for the next opportunity. It is imperative that States take collective action now.”

The call for the phase-out by Mr. Tuncak and the Special Rapporteur on the right to food, Hilal Elver, comes as States, businesses and other parties from around the world gather in Geneva, Switzerland, for the fourth meeting of the International Conference on Chemicals Management. The week-long gathering is the last of its kind before 2020, the year by which States pledged to achieve sound management of chemicals following the 2002 Earth Summit.

“There are still a significant proportion of pesticides being used around the world which can be considered as highly hazardous,” he warned, “despite international pesticide experts’ claim that there are almost always safer alternatives to highly hazardous pesticides.”

Criteria developed by the UN Food and Agriculture Organization (FAO) and the World Health Organization (WHO) include pesticides with high acute toxicity, with established chronic toxic effects including the ability to cause cancer even at very low exposure levels, or which are very persistent in the environment or in organisms.

“Often, the residues of these hazardous pesticides are found in the food that we consume and this impedes individual’s right to access safe healthy food. The exposure is particularly serious for farmworkers and their families. Children are exposed to highly hazardous pesticides through their mother’s milk,” said Ms. Elver.

“Urgent action is needed. States must reorient their methods of food production towards systems that inflict less harm, are more sustainable, and truly contribute to the realization of all human rights,” she added.

♦ Receive daily updates directly in your inbox - Subscribe here to a topic.
♦ Download the UN News app for your iOS or Android devices.
hazardous 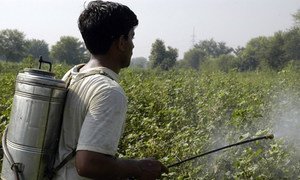 Over the next two and a half years, the United Nations food agency will provide technical assistance to Belarus in managing its stocks of obsolete pesticides, it was announced today.