United Nations Secretary-General Ban Ki-moon today warned that in the coming years, unexpected new disease outbreaks will hit, and societies that proactively address these challenges are at the heart of secure nations and a safer world.

“This requires predictable funding for accessible and effective health systems, and predictable support when a health emergency is suspected,” Mr. Ban told senior government and UN system leaders at a high-level event on securing a healthy future for the world, held on the margins of the Sustainable Development Summit.

He said that the launch of the Sustainable Development Goals (SDGs), which world leaders adopted yesterday, is a timely reminder of the critical need to build strong basic health systems and community resilience.

“Success depends on being able to anticipate these outbreaks, to react quickly, to curtail its spread and to prevent suffering,” he stated.

The UN chief recalled that exactly one year ago, more than 500 people were being newly diagnosed with Ebola each week in Guinea, Liberia and Sierra Leone, but that today, Liberia is free of Ebola transmission and cases have declined dramatically in other Western African countries thanks to decisive leadership.

Underlining that the world must do better when the next health crisis emerges, he said he is grateful for the “extraordinary support” for the establishment of a High-Level Panel to examine the global response to health crises, which he appointed in April.

“Human security depends on health security,” the Secretary-General continued. “I am pleased by a number of regional and global initiatives to strengthen health systems.”

Last June, the leaders of the Group of 7 most industrialized nations pledged to strengthen health systems and assist at least 60 countries with implementing the UN World Health Organization’s International Health Regulations; the World Bank has been spearheading the development of a new Pandemic Emergency Financing Facility; and last July, African Union Health Ministers adopted the Statute of the African Centre for Disease Control and Prevention.

“It is also essential that the World Health Organization has the authority, resources and capacity to provide global leadership in times of health crises,” he added, thanking its Director-General, Dr. Margaret Chan, for her critical efforts to reform the agency.

He concluded that with the present leadership and initiatives, he is confident that the international community will have the imagination – and the political will – to build a truly transformative and lasting global architecture for a healthy future. 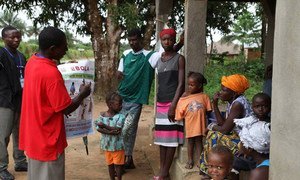