OCHA/Ivo Brandau
During the lean season, families in Wurotorobe, Burkina Faso, struggle to have at least one meal per day, but often they only calm the worst hunger. The poor diet makes small children extremely vulnerable to epidemics and disease.
26 September 2015

United Nations officials today called on youth to champion the cause of ending hunger, achieving food security and improving nutrition – one of 17 Sustainable Development Goals (SDGs) world leaders committed themselves to on Friday.

The call came at a high-level event entitled “Mobilizing Generation Zero Hunger,” held on the margins of the Sustainable Development Summit at UN Headquarters, brought together young entrepreneurs and activists from around the world, along with global leaders, policy makers and celebrities to discuss how mobilizing this generation to champion sustainable agriculture, food security and nutrition can help make zero hunger and sustainable development a reality.

Ending hunger is Goal 2 of the SDGs, which collectively aim to ensure the long-term well-being of the planet and its people.

“The global goal to end hunger, achieve food security and improve nutrition is one of the most critical,” Mogens Lykketoft, President of the 70th session of the UN General Assembly, said at the event.

“While the number of people suffering from hunger in developing regions has fallen by half since 1990, there are still close to 800 million people undernourished worldwide, a majority children and youth,” he noted.

The event was co-hosted by three UN agencies – the Food and Agriculture Organization (FAO), the International Fund for Agricultural Development (IFAD), the World Food Programme (WFP) – and the Government of Ireland.

Kanayo F. Nwanze, President of IFAD, noted the massive untapped human resources available in most of the developing world between the ages of 10 and 24. He stressed that each country should take up the responsibility of maximizing the potential of its youth and provide them with opportunities to be able to achieve the goal of Zero Hunger by 2030.

“People develop themselves. Development doesn’t come to you. If you don’t take responsibility for yourself and expect someone else to develop you then zero hunger will remain a dream,” said Mr. Nwanze.

Ireland’s President, Michael D. Higgins, emphasized that fulfilling the SDGs would only be possible if “we established it as our moral imperative.”

In an emotional address, Nobel Prize nominee Victor Ochen recounted surviving seven years of childhood having only one meal a day. He did not just know about hunger from books, he knew hunger from experience, he told the event, which also featured Brazilian footballer and WFP Ambassador against Hunger Kaká. 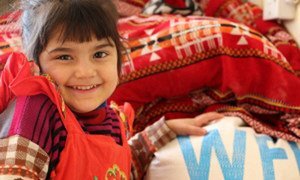 The United Nations World Food Programme (WFP) today unveiled a new partnership with some of the world's leading companies, including McDonald's, Burger King, Facebook, Google and MasterCard, in an unprecedented effort to support refugees and displaced people struggling to feed their families.