Top global companies and foundations, including the Bill & Melinda Gates Foundation and Unilever, are committing millions of dollars to promote gender equality as they gather at a United Nations event in New York.

Commitments made at the Business and Philanthropy Leader’s Forum, hosted by the UN entity dedicated to gender equality and the empowerment of women (UN Women), seek to close the deep financing gaps that hinder progress for women and girls.

Achieving gender equality is one of the 17 Sustainable Development Goals (SDGs) that comprise the 2030 Agenda, which world leaders adopted on Friday. According to UN Women, gender equality is crucial to realizing the “transformative promise” of the new global development agenda.

“There can be no gender equality without investment and willingness to change the status quo,” the agency’s Executive Director, Phumzile Mlambo-Ngcuka, said in a news release. “To make 2030 the expiry date for all forms of gender discrimination, everywhere, all businesses will need to step up essential investments in gender equality.”

The forum, co-hosted with Alibaba Group and the Bill & Melinda Gates Foundation, received contributions of $5 million and $1 million from these organizations, respectively. Significant contributions were received from other institutions as well.

“Achieving gender equality by 2030 is an ambitious, but realistic goal in the modern age and the private sector has a critical role to play,” said Alibaba Executive Chairman Jack Ma. “We at Alibaba believe in the power of technology to allow women to thrive in today’s and tomorrow’s economy. With partners such as UN Women, we will continue to create economic opportunity for millions of female entrepreneurs around the world.”

Melinda Gates, Co-Chair and Trustee of the Gates Foundation, noted that the world is moving in the right direction because women are pushing it that way. “Women drive progress for all of us by demanding better healthcare and opportunities for their children and greater equity for everyone. That’s why, when we invest in women and girls, we’re investing in the people who invest in everyone else.”

Unilever, which has set for itself the goal of empowering five million women across the world by 2020, is extending support to promote economic opportunities for women, reduce unpaid care work and ensure the safety of women and girls.

“Gender equality also presents an enormous opportunity for economic and business growth. Addressing the barriers is not just the right thing to do; it must be a business priority,” said Paul Polman, the company’s CEO and recent winner of the UN’s top environmental prize for his role in advocating more sustainable business models.

The event takes place on the eve of the Global Leader’s Meeting on Gender Equality and Women’s Empowerment – a Commitment to Action, at which heads of State and government will discuss actions to achieve gender equality by 2030. 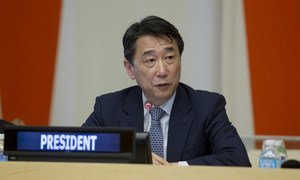 Addressing today a high-level gathering at United Nations Headquarters, the President of the UN Economic and Social Council (ECOSOC) declared that the empowerment of women and the full realization of their human rights are essential for achieving sustainable development and for building peaceful, just and inclusive societies.