UN Photo/Mark Garten
Pope Francis is welcomed by Secretary-General Ban Ki-moon and receives flower bouquets from children of UN staff members at the start of his visit to UN Headquarters.
25 September 2015

“The present time invites us to give priority to actions which generate new processes in society, so as to bear fruit in significant and positive historical events. We cannot permit ourselves to postpone ‘certain agendas’ for the future,” said Pope Francis.

“The future demands of us critical and global decisions in the face of world-wide conflicts which increase the number of the excluded and those in need,” he declared in an address just ahead of the General Assembly’s formal adoption of a new global framework, Transforming Our World: the 2030 Agenda for Sustainable Development, composed of 17 goals and 169 targets to wipe out poverty, fight inequality and tackle climate over the next 15 years.

In his remarks, he also warned that the realities in the Middle East and Africa were grave.

“I must renew my repeated appeals regarding the painful situation of the entire Middle East, North Africa and other African countries,” said Pope Francis, “These realities should serve as a grave summons to an examination of conscience on the part of those charged with the conduct of international affairs.” 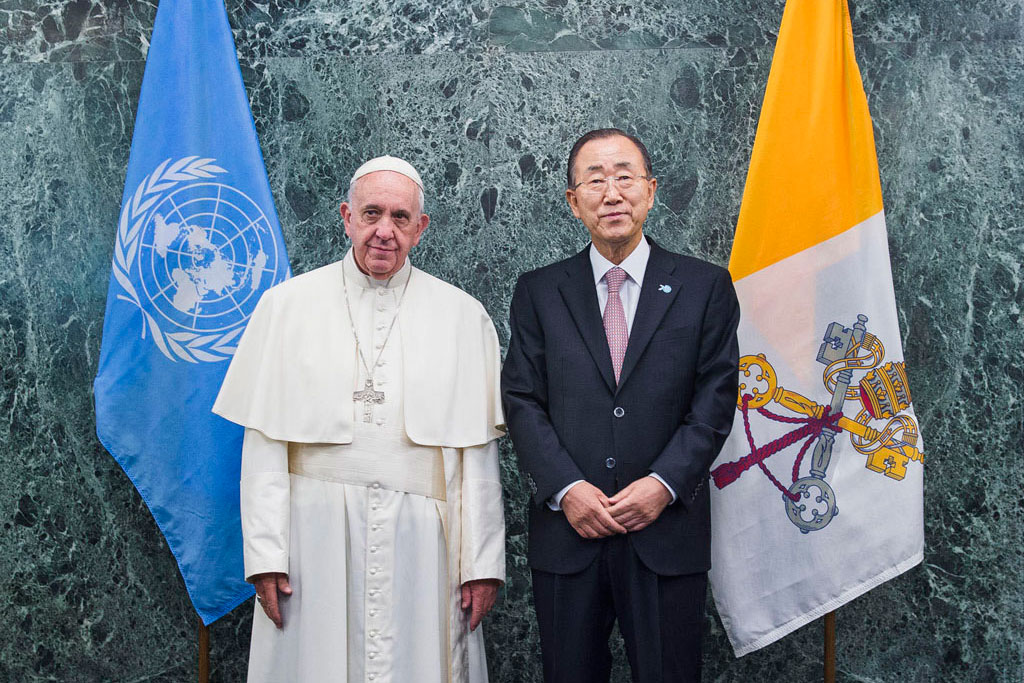 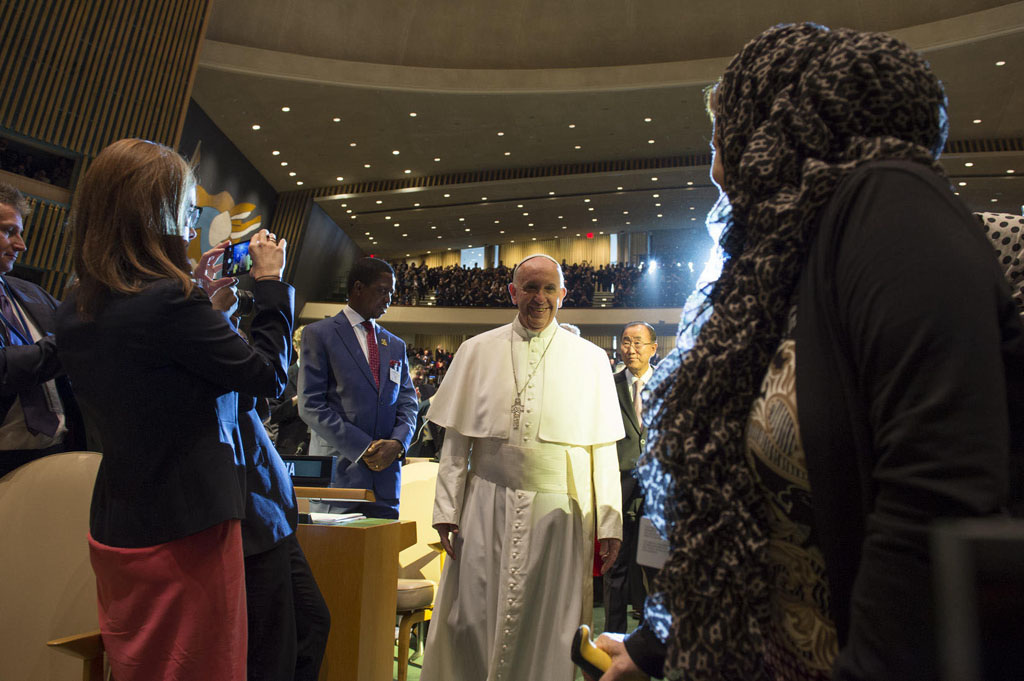 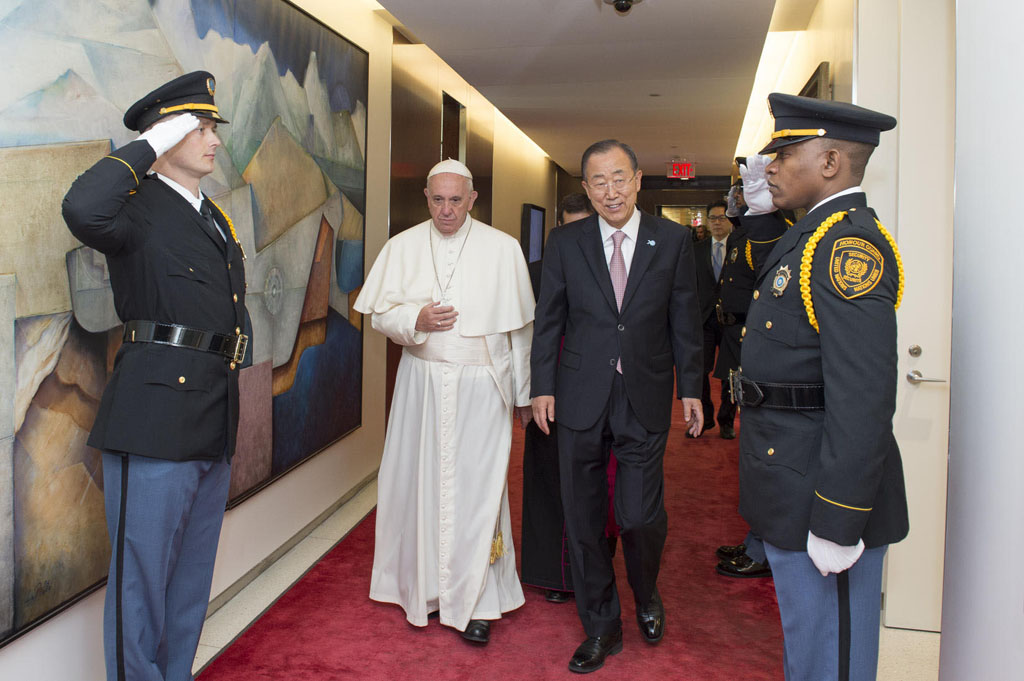 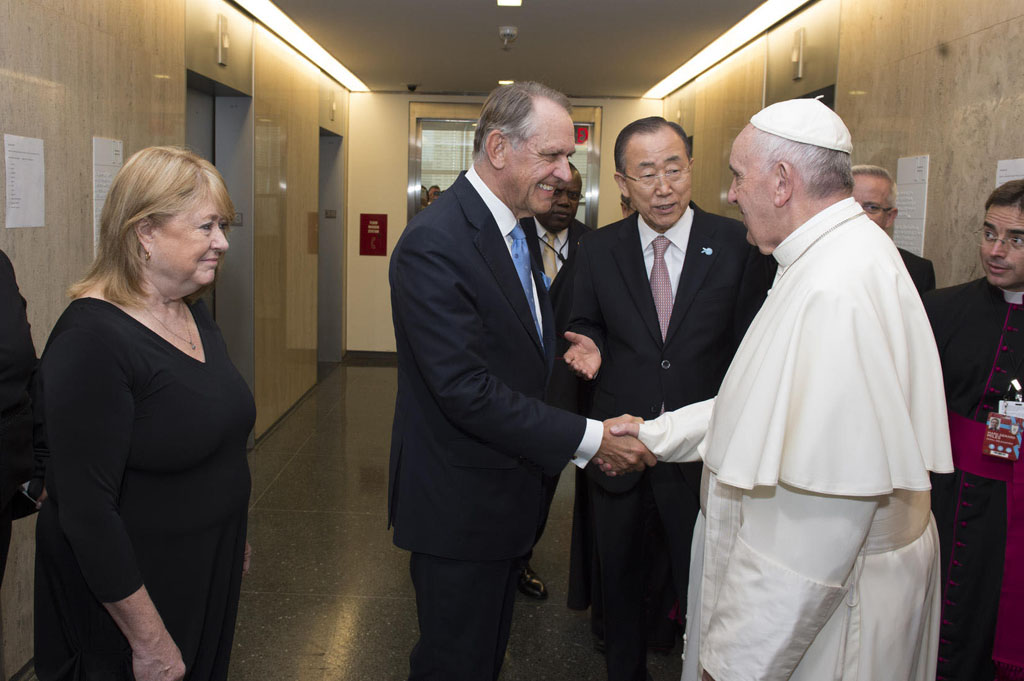 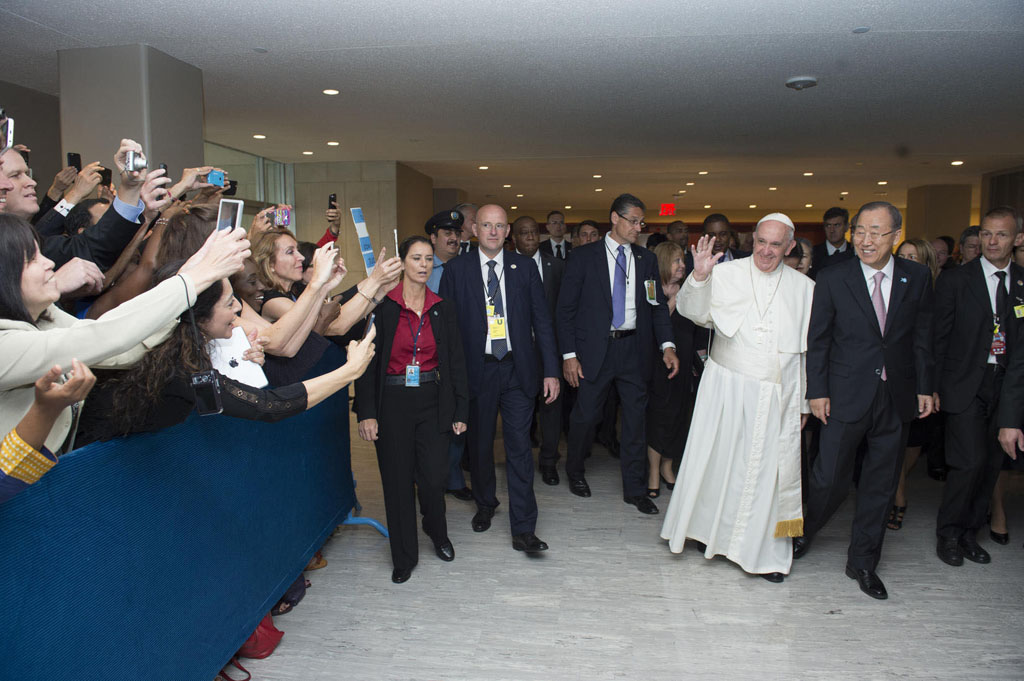 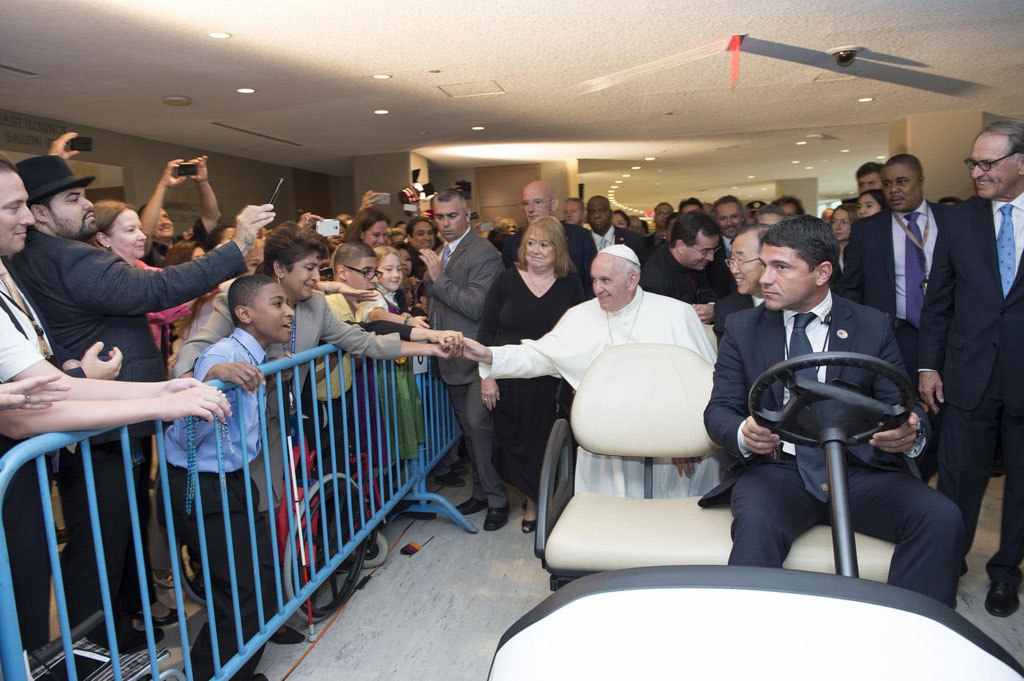 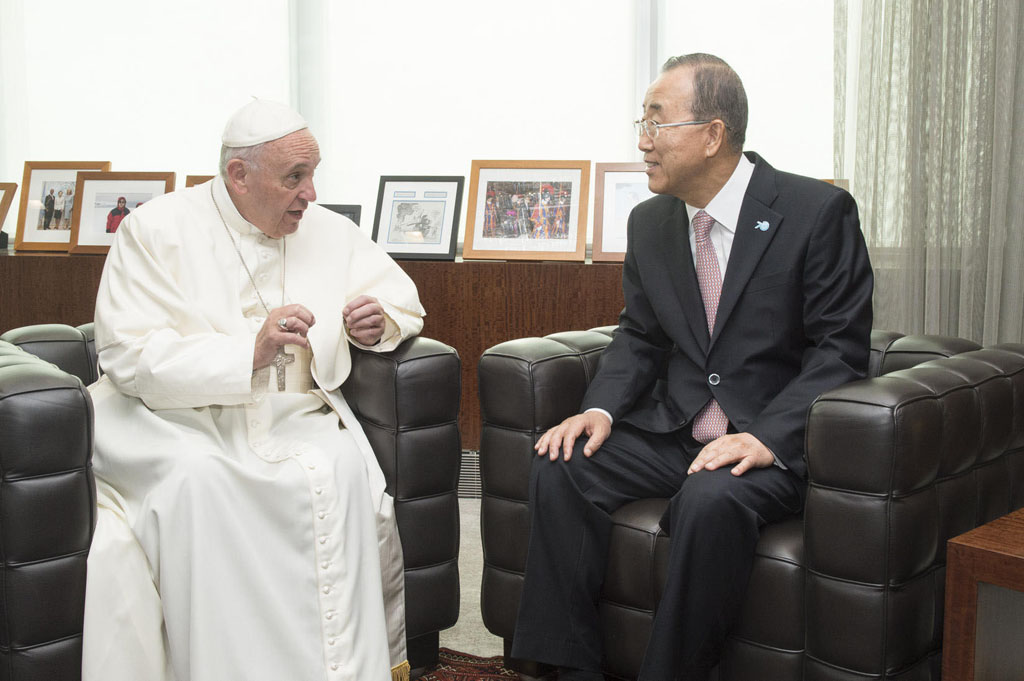 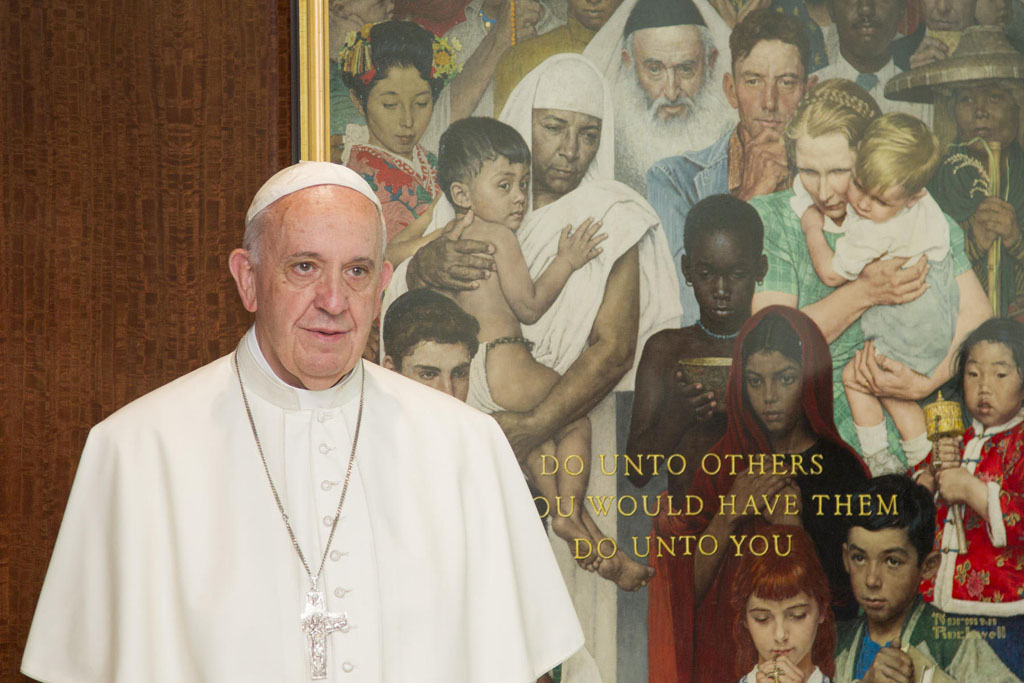 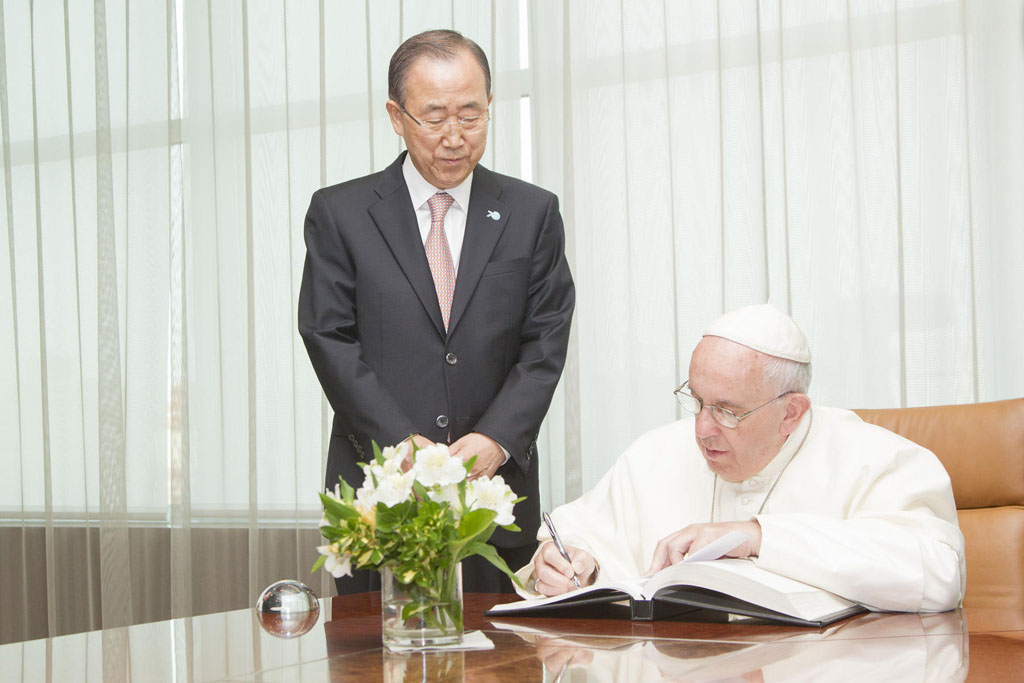 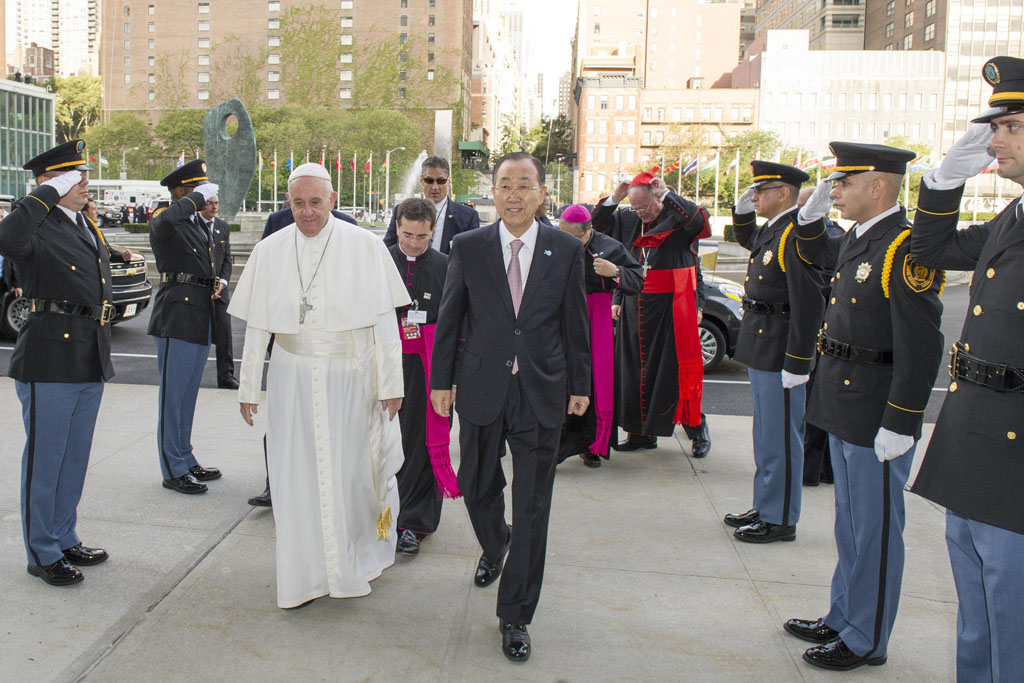 “Not only in cases of religious or cultural persecution, but in every situation of conflict, as in Ukraine, Syria, Iraq, Libya, South Sudan and the Great Lakes region, real human beings take precedence over partisan interests, however legitimate the latter may be,” he continued. “In wars and conflicts there are individual persons, our brothers and sisters, men and women, young and old, boys and girls who weep, suffer and die.”

The Pope also noted the achievements of the UN as it celebrates its seventieth anniversary.

“The history of this organized community of States is one of important common achievements over a period of unusually fast-paced changes,” he said. “Without claiming to be exhaustive, we can mention the codification and development of international law, the establishment of international norms regarding human rights, advances in humanitarian law, the resolution of numerous conflicts, operations of peace-keeping and reconciliation, and any number of other accomplishments in every area of international activity and endeavour.”

But he also cautioned that the experience of the last 70 years had made it clear that reform and adaptation to the times were sometimes necessary.

“The need for greater equity is especially true in the case of those bodies with effective executive capability, such as the Security Council, the financial agencies and the groups or mechanisms specifically created to deal with economic crises,” he said.

The Pope also addressed the effects of exclusion and inequality, noting that the adoption of the 2030 Agenda, was an important step forward, adding that he was confident that the December Conference of States Parties to the UN Framework Convention on Climate Change (UNFCCC), widely referred to as COP 21, would secure fundamental and effective agreements.

During his introductory remarks, UN Secretary-General Ban Ki-moon said never in its 70-year history has the United Nations been honoured to welcome a Pope for the opening of the General Assembly.

Statement by Secretary-General Ban Ki-moon before the address by His Holiness Pope Francis at the 70th session of the General Assembly. Credit: United Nations

“Your visit today coincides with the adoption of the 2030 Agenda for Sustainable Development,” Mr. Ban told Pope Francis.

“But that is no coincidence. You have often spoken of an ‘integral ecology’ – one that encompasses the environment, economic growth, social justice and human well-being – in other words, sustainable development for our common home.”

He noted that the recent Papal Encyclical – Laudato Si – defined climate change as a principal challenge facing humanity, and a moral issue.

“This message is critical as we approach the pivotal climate change conference in Paris in December,” the UN chief continued. “Across the global agenda, His Holiness is a resounding voice of conscience. He has cried out for compassion for the world’s refugees and migrants, and solidarity with people trapped in conflict and poverty.”

Mr. Ban recalled that in May 2014, Pope Francis met with the full leadership of the United Nations system at the Vatican, at which time he affirmed that the global community must mobilize the world beyond religious or political differences to forge a shared vision – a life of dignity for all.

“When you recalled previously how inseparable the ‘bond is between concern for nature, justice for the poor, commitment to society, and peace’, you spoke directly to the three pillars of the United Nations – and to the interdependency and interconnectedness between these three pillars,” Mr. Lykketoft told the Pope.

“That is the message at the heart of the new and very ambitious 2030 Agenda on Sustainable Development,” he continued.

Mr. Lykketoft also referred to the upcoming climate change conference in Paris, where, he said, the UN must adopt an ambitious climate agreement to protect people and the planet.

He also noted that a similar urgency was required “to bring an end to the conflicts and violent extremism affecting many parts of our world today,” adding that “our collective response to these crises, and to the plight of millions of displaced people and refugees has been, at beast, inadequate, and, at worst, a failure of our humanity.”

Those gathered at the General Assembly must respond “with leadership and action, in the spirit of solidarity, dialogue and tolerance,” he said.