A unique installation that brings the voices of children and young people to the heart of the United Nations General Assembly was unveiled today by top UN officials, UN Children’s Fund (UNICEF) Goodwill Ambassador David Beckham and youth representatives from an initiative called ‘Voices of Youth.’

“2014 was one of the most devastating years on record for children […] and 2015 has proven to be just as bad,” David Beckham told a press conference in New York. “As a UNICEF Ambassador and as a father, it breaks my heart to see children continue to suffer.”

In a press release, he further underlined that the international community has an opportunity this year, with the world focused on the new Global Goals, to create a better future for millions of children.

The international soccer star was referring to the Sustainable Development Goals (SDGs), a new set of 17 goals and 169 targets that seek to stimulate action over the next 15 years in areas of critical importance towards building a more equitable world for all.

As the UN prepares to adopt this new framework tomorrow, the Assembly of Youth– a digital installation created for UNICEF by Google – harnesses mobile technology and social media to deliver personal messages from children and young people across the globe directly to world leaders.

The messages highlight the challenges they face in their homes and communities – including extreme poverty, inequality, violence, deadly disease and conflict – and express their hopes for the future.

At the unveiling, Mr. Beckham urged world leaders to listen to these messages and to take action to transform the lives of children by putting the most disadvantaged at the centre of all decisions and investments in the new 15-year development agenda.

“Every child has a voice, but too often they’re just not heard,” he said. “At this crucial time, as world leaders are gathering here in New York, and thanks to this incredible installation, their voices will be heard.”

Also speaking at the press conference was UN Secretary-General Ban Ki-moon, who said the new Global Goals put people, especially youth, at the centre of development.

“I am pleased to be here today to help UNICEF bring the voices of young people to the forefront of this new development era,” said Mr. Ban. “They will live tomorrow in a world that will be shaped by the actions we take together now.”

Despite the progress made toward realizing the landmark Millennium Development Goals (MDGs), the UN estimates that nearly 6 million children under the age of five still die every year from mostly preventable causes, and more than 120 million children and adolescents are still not in school.

“Unless we invest in the most disadvantaged children from the earliest years, we will continue to see in the next generation the same poverty and inequalities that divide and destabilize our world today, and rob us of the potential of so many young people,” said UNICEF Executive Director Anthony Lake.

Also present were Noor Samee, 16, and Rodrigo Bustamante, 17, who are helping UNICEF bring the voices of young people to the General Assembly this week.

Data displayed in the installation located at the Visitor’s entrance of the General Assembly is drawn from U-Report, a free SMS-based system that allows young people to speak out on the issues they face and what is happening in their communities.

Data is also derived from outreach to children and young people across UNICEF social media channels. 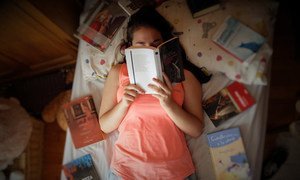