Following a coup d’état last week in Burkina Faso, Secretary-General Ban Ki-moon today welcomed the reinstatement of President Michel Kafando and of the transitional institutions in the country.

In a statement, Mr. Ban commended the efforts undertaken by the Economic Community Of West African States (ECOWAS) Authority of Heads of State and Government, including the ECOWAS high-level mediation team, towards the early resolution of the political crisis.

President Kafando, Prime Minister Yacouba Isaac Zida and several Government ministers were detained one week ago and later released by elements of the Presidential Guard.

Today, the UN chief paid tribute to the excellent collaboration between the United Nations, the African Union, ECOWAS and other international partners to ensure the return to constitutional order in the country.

He stressed that the resumption of the transition process will enable Burkina Faso to hold presidential and legislative elections in accordance with the country’s Constitution and Transitional Charter.

He also called on all national stakeholders to exercise restraint and to ensure respect for the physical integrity and human rights of all Burkinabè citizens.

Meanwhile, the Secretary-General’s Special Representative for West Africa, Mohamed Ibn Chambas, will continue to work closely with regional and international partners to support national authorities in the lead-up to peaceful and transparent elections. 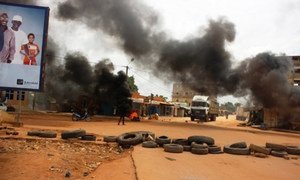 Concerned by escalating violence in Burkina Faso, Ban urges respect for all citizens

United Nations Secretary-General Ban Ki-moon is following with “great concern” the situation in Burkina Faso, and today called upon the country’s defence and security forces to avoid at all costs an escalation of violence and to ensure the respect for physical security and human rights of all Burkinabé citizens.