The United Nations Secretariat Building in New York will be illuminated this evening with massive projections relating to the Sustainable Development Goals (SDGs) ahead of the three-day special UN summit beginning on Friday.

“Starting at 7:30 p.m. until 10 p.m., we expect to illuminate the building with [images] relating to the Sustainable Development Goals, as well as images related to the 70th anniversary of the United Nations,” Under-Secretary-General for Public Information Cristina Gallach told reporters at a press conference, noting that filmmaker Richard Curtis produced the project.

The projections were developed in collaboration with the Global Goals campaign and 59 Productions. The filmed footage will be edited into a four-minute film to be shown at the Global Citizen Festival on 26 September and broadcast around the world as part of international coverage of the event.

The Global Goals campaign – funded by Mr. Curtis and launched at UN Headquarters earlier this month – aims to reach 7 billion people in seven days with news of the Global Goals for Sustainable Development.

“We think it's going to be a moment to raise awareness, so [its] the right thing to do just a few days before the summit,” she added.

More than 150 world leaders are expected at UN Headquarters to formally adopt at a three-day summit that begins Friday 25 September, an ambitious new sustainable development agenda. It will serve as the launch pad for action by the international community and by national governments to promote shared prosperity and well-being for all over the next 15 years.

Also speaking at the press conference was Amina J. Mohammed, the Secretary-General's Special Adviser on Post-2015 Development Planning, who described the agreement as “really meaningful.”

“It's universal so it applies to everyone," she explained. “We will no longer have a North-South conversation about what the North is doing for the South, but what we are doing for each other. Clearly anything that happens anywhere in this world has that fallout in many other places – from the global financial crisis to conflict and migration, we feel it everywhere – to natural disasters and climate change.”

The agenda builds on the successful outcome of the Conference on Financing for Development that recently concluded in Addis Ababa, Ethiopia, and is expected to positively affect the negotiations on a new meaningful and universal climate agreement in Paris this December.

Its adoption on Friday will be preceded by an address to the General Assembly by Pope Francis. Shortly after he departs, a special video will be projected in the Hall.

Performances are also expected by international pop stars and UNICEF Goodwill Ambassadors Shakira and Angélique Kidjo. Malala Yousafzai will then share a message alongside 193 young people representatives from all UN Member States. The summit will then officially open.

Once the goals are adopted, Ms. Gallach said, every goal will be read out by a group of different people – female presidents, young children, celebrities and other individuals. 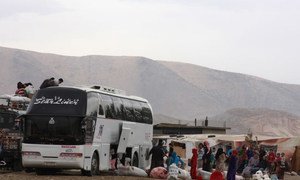 The United Nations Relief and Works Agency for Palestine Refugees in the Near East (UNRWA) called today for restraint in the wake of 24 August clashes between various armed groups that have seriously impacted the refugee community in southern Lebanon’s Ein el Hilweh Camp in Saida.