The United Nations Children’s Fund (UNICEF) and its Goodwill Ambassador and international pop star Shakira urged global leaders today to invest heavily in early childhood development in the wake of new science that is creating a revolutionary shift in understanding the lasting effects of deprivation and stress on the developing brains of young children.

“More than 100 million children are out of school and 159 million boys and girls under five are physically and cognitively stunted due to a lack of care and proper nutrition,” said Shakira, who joined Secretary-General Ban Ki-moon, UNICEF Executive Director Anthony Lake and the Director of the Harvard University Center on the Developing Child, Dr. Jack P. Shonkoff at an event at UN Headquarters in New York.

“Every year that passes without us making significant investment in early childhood development and initiatives that address these issues, millions of kids will be born into the same cycle of poverty and lack of opportunity,” she added.

According to UNICEF, brain development is most intense during early childhood, with nearly 1,000 neural connections happening every second. These early synaptic connections form the basis of a child’s health and wellbeing, including the lifelong capacity to learn, adapt to change, and handle adversity.

Yet nearly one-third of all children under five years of age in lower- and middle-income countries are reportedly growing up in environments and situations that can interfere with this period of rapid growth and development.

Meanwhile, new scientific research shows that the developing brains of young children are as affected by environmental factors as they are by genetics. Inadequate nutrition, lack of stimulation, and toxic stress all can have a negative impact on brain development.

But it also shows that early, cost-effective interventions, such as encouraging breast feeding, or reading and playing with young children, as well as formal early education programmes, all support healthier brain development.

“What this new science is telling us is that literally, early experiences are kind of built into the body,” Dr. Shonkoff explained during a press conference on the issue. “They literally affect the development of the circuits of the brain, they affect the immune system’s development, they affect the development of the cardiovascular system, and so […] it’s a new opportunity to think about what we might do differently to protect children from the long-term consequences of that.”

UNICEF says these findings have significant implications for children growing up in extreme poverty, exposed to domestic violence, or in countries affected by conflict and other crises. In addition, these effects on the developing brain can actually alter the expression of genes, potentially affecting the next generation.

“What we are learning about all the elements that affect a child’s brain – whether her body is well nourished, whether her mind is stimulated, whether she is protected from violence – must change the way we think about early childhood development, and how we act,” said Mr. Lake.

“To give every child a fair chance in life, we need to invest early, invest equitably, and invest smartly – not only in education, but in health, in nutrition, and in protection.”

Evidence increasingly points to investment in early childhood as one of the most cost-effective ways to achieve sustainable development. A study on increasing pre-school enrolment in 73 countries found higher future wages of $6 - $17 per dollar invested, indicating potential long-term benefits ranging from $11 to $34 billion.

The event preludes this week’s adoption of the new Sustainable Development Goals (SDGs), which will officially include early childhood development as part of the transformative agenda for 2015 and beyond.

The Secretary-General shared a similar message, underlining that investing in early childhood development “does not just benefit children, it benefits societies.”

“We all have a shared responsibility to build this movement,” he said. “Today I ask you to make this call your own. Use your influence to make early childhood development a public priority.”

He urged the global community to make a commitment to Generation 2015, to give all the children born this year the best start in life.

♦ Receive daily updates directly in your inbox - Subscribe here to a topic.
♦ Download the UN News app for your iOS or Android devices.
childhood development 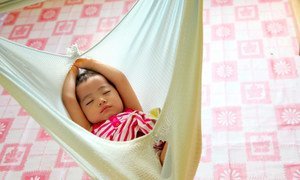 Child mortality rates have plummeted to less than half of what they were in 1990, but it is not enough to meet the Millennium Development Goal (MDG) of a two-thirds reduction over the past 15 years, according to a new report released today by a number of United Nations agencies.