In a news release, they acknowledged the announcement made by the Philippines about ongoing probes into the murders and stressed the need for carrying out independent investigations.

“We take note of the announcement made today at the Human Rights Council in Geneva by the delegation of the Philippines that an investigation is underway,” said the Special Rapporteurs on the rights of indigenous peoples, Victoria Tauli-Corpuz, and on the situation of human rights defenders, Michel Forst.

“We urge the Philippines authorities to ensure that such investigation into these tragic events be carried out independently to identify and bring perpetrators to justice, to ensure the safe return of the indigenous peoples displaced by the recent violent events, and guarantee redress to the victims’ families in compliance with their indigenous traditions and the demilitarization and restoration of peace in regions affected by armed conflicts including in Surigao del Sur and Bukidnon,” they said.

One of the human rights defenders was found murdered in a classroom of the Alternative Learning Center for Agriculture and Development, where he served as director, according to the news release.

The Philippine Army and alleged members of paramilitary forces occupied the school and had detained the director before killing him. The forced occupation led to about 2,000 residents to evacuate to the neighbouring Tandag city.

“Military occupation of civilian institutions and killing of civilians, particularly in places such as schools which should remain safe havens for children from this type of violence, are unacceptable, deplorable and contrary to international human rights and international humanitarian standards,” the Special Rapporteurs said.

The other two victims were representatives of the Manobo community, including a tribal chief and Chairperson of MAPASU, an organization fighting against human rights violation in indigenous communities.

Last month, five members of an indigenous Manobo family where brutally murdered, allegedly by members of the Philippine Army in Mendis, Pangantucan, Bukidnon. The victims included a 72-year-old blind person and two children. 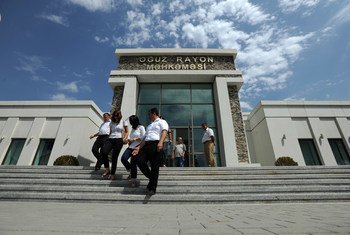