Broadband Internet is failing to reach billions of people living in the developing world, including 90 per cent of those living in the poorest nations, according to a new United Nations report that offers country-by-country data on the state of access around the globe.

The State of Broadband, produced by the UN Broadband Commission and released today, reveals that 57 per cent of the world’s people remain offline and unable to take advantage of the enormous economic and social benefits the Internet can offer.

The report, which comes ahead of this week’s summit in New York at which world leaders will adopt the 2030 Agenda which contains the new Sustainable Development Goals (SDGs), stresses that access to information and communication technology (ICT), particularly broadband Internet, has the potential to serve as a major accelerator of development. The importance of ICT connectivity is specifically recognized in the SDGs.

“The UN Sustainable Development Goals remind us that we need to measure global development by the number of those being left behind,” said Houlin Zhao, the Secretary-General of the International Telecommunication Union (ITU), who serves as co-Vice Chair of the Commission with Irina Bokova, the Director-General of the UN Educational, Scientific and Cultural Organization (UNESCO).

“The 2030 Agenda recognizes the power of new technologies to accelerate human progress, to bridge the digital divide, to develop knowledge societies – we must do everything to support States in reaching these goals, especially developing States,” Ms. Bokova noted.

“This calls for stronger efforts by governments and all actors, in ensuring access, use and affordability – it requires also greater work to build the capacities of all women and men to make the most of all new opportunities,” she added.

According to the report, the Internet is currently only accessible to 35 per cent of people in developing countries. The situation in the 48 UN-designated Least Developed Countries (LDCs) is particularly critical, with over 90 per cent of people without any kind of Internet connectivity.

This year’s figures show that the top ten countries for household Internet penetration are all located in Asia or the Middle East. The Republic of Korea continues to have the world’s highest household broadband penetration, with 98.5 per cent of homes connected, followed by Qatar (98 per cent) and Saudi Arabia (94 per cent).

The lowest levels of Internet access are mostly found in sub-Saharan Africa, with Internet available to less than 2 per cent of the populations in Guinea, Somalia, Burundi and Eritrea. 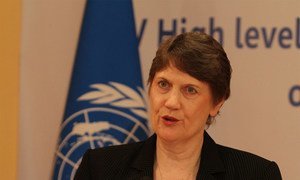 At academic event, UN officials spotlight data and technology as key to sustainability

The importance of quality data and cutting edge information communication technologies (ICTs) is increasingly critical to the shaping of the future sustainable development agenda, the head of the United Nations Development Programme (UNDP) confirmed today.