UN Photo/Rick Bajornas
President of the sixty-ninth session of the General Assembly Sam Kutesa briefs journalists on the Assembly’s work during the session, which concluded on 14 September 2015.
14 September 2015

The 69th session of the United Nations General Assembly presented countries with a “historic opportunity” to change the world for the better and was guided by the overarching principles of cooperation, compromise and solidarity, its President said today.

“Our shared vision of ‘putting people at the centre of everything we do’ has yielded many important outcomes that will improve the everyday lives of men, women and children around the world,” Sam Kutesa, who is also Minister for Foreign Affairs of Uganda, said in his closing address to the 193-member body.

Over the course of the past one year, the Assembly held 105 plenary meetings and adopted 327 resolutions.

“The landmark agreement on the outcome document […] 2030 Agenda for Sustainable Development was without question one of the major highlights of the session, it was an unprecedented collective undertaking with Member States and other stakeholders working tirelessly to formulate a universal, inclusive and transformative future development framework,” Mr. Kutesa noted.

The Agenda, to be adopted next week during a special summit at UN Headquarters, consists of 17 Sustainable Development Goals and 169 targets that aim to be a charter for people and the planet in the twenty-first century. They will stimulate action over the next 15 years in areas of critical importance towards building a more equitable and sustainable world for all.

Mr. Kutesa added that the cornerstone of the global partnership for development is the Addis Ababa Action Agenda, which was adopted at the Third International Conference on Financing for Development in July, following months of negotiations.

“Yet, our endeavour to set our world on a sustainable course also requires that we urgently address one of the defining challenges of our time – climate change,” he insisted. “Indeed, supporting efforts to reach a new, universally-binding climate change agreement was another important priority during the 69th session.”

He stated that it will be critical to reach a “bold and ambitious” agreement in Paris this December when world leaders meet for the UN Climate Change Conference, also known as COP21.

Meanwhile, as the international community marks the 70th anniversary of the UN, Mr. Kutesa underlined that it should use this occasion to consider how the Organization can transform and evolve to improve its capacity to respond to modern-day challenges. He recalled that ten years ago leaders expressed support for an early reform of the Security Council.

“During this session, I made it one of my priorities in order to move this process forward. […] Together we should muster the resolve to reform the Council it in a way that reflects the geo-political realities of our current world,” he noted. “We should build on the work done during this session and ensure there is continued progress in this reform effort, and that we maintain a constructive, flexible spirit moving forward.”

In addition, in the context of a new agreement last Friday on the revitalization of the General Assembly, Member States decided to give a greater role to the body in the upcoming election of the Secretary-General. Mr. Kutesa called this “an important step toward openness and transparency in the selection process.”

Also speaking at the closing session and echoing the importance of these new measures to guide the selection of his successor, Secretary-General Ban Ki-moon said the Assembly’s work during the 69th session was “as varied and vital as ever.”

“Last fall, this session’s very first resolution paved the way for bold and effective action to combat Ebola […],” Mr. Ban recalled. “Cases of Ebola have declined dramatically as a result of decisive leadership at all levels, and Liberia has recently been declared free of Ebola.”

The UN chief stated that through all of this activity, great skill and collegiality was shown, adding that he is “sure we will see more of the same” under the presidency of Mogens Lykketoft, the former Danish Foreign Minister who will preside over the Assembly’s 70th session, which is set to open tomorrow.

Made up of all the 193 Member States of the UN, the General Assembly provides a forum for multilateral discussion of the full spectrum of international issues covered by the UN Charter. It meets in regular session intensively from September to December each year, and thereafter as required. 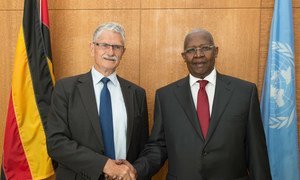 The United Nations General Assembly has elected by acclamation Mogens Lykketoft of Denmark as President of its upcoming 70th session.