“The fundamentals of UN peace operations will not change. Our job is to support the negotiated settlement of conflicts and to protect civilians and advance their right to security, justice and development. It is essential that we are accountable and responsive to the needs of the people we serve,” Mr. Ban said in a statement on the release of his report, “The Future of UN Peace Operations.”

The report contains the Secretary-General’s agenda to take forward the recommendations of the High-Level Independent Panel, set up in October 2014 and chaired by President Jose Ramos-Horta to examine how the full range of UN peace operations can be harnessed to address the spread and intensity of conflict today.

“I asked the Panel to be bold in their recommendations on how UN peace operations can be strengthened to better meet today’s challenges,” Mr. Ban noted. “Today, I present my agenda to take forward the Panel’s recommendations.

“I set out what I believe to be the priorities for UN peace operations and the steps we need to take to achieve them. In so doing, I draw on my experiences over the past eight years and the Panel’s comprehensive recommendations.”

The UN chief outlined three “fundamental” changes that are urgently required to adapt UN peace operations to current and future challenges, adding that the report contains a detailed action plan to set these changes in motion.

“First, we need to prioritise prevention and mediation if we are to break the cycle of responding too late and too expensively,” he stated.

“Second, we need to change the way we plan and conduct UN peace operations to make them faster, more responsive and more accountable to countries and people in conflict.

“Third, we must put in place a global-regional framework to manage today’s peace and security challenges,” he said, adding that this must start with a reinforced partnership between the UN and the African Union.

“Critically,” he continued, “we cannot be the source of additional suffering. My report therefore outlines over a dozen new measures I am taking to rid the United Nations of heinous sexual exploitation and abuse.”

The report of the 16-member Panel came 15 years after the release of the groundbreaking Brahimi Report, named after long-time UN adviser and renowned Algerian diplomat Lakhdar Brahimi who chaired a similar high-level panel convened by former UN Secretary-General Kofi Annan.

Mr. Ban emphasized that “change will only take place if Member States and partners join me in this effort,” noting that his report lists “essential actions” the Security Council, Member States and contributing countries are invited to take.

“With political engagement and smart and targeted investments we can improve the world’s response to today’s horrors,” he stated.

“The 70th anniversary of the United Nations is the moment to rise to this challenge. I look forward to working with the entire Membership and all partners to advance this agenda.”

“Making UN peace operations fit for purpose helps advance all our UN goals,” he stated, adding that there is a clear link, therefore, between the Secretary-General’s report and the 2030 Agenda for Sustainable Development that countries will adopt later this month. 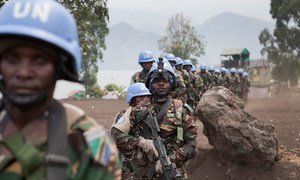