Dr. Bruce Aylward, Special Representative on Ebola Response for the World Health Organization (WHO), made those remarks at a press conference in Geneva, following his return from the “hot spots” of the epidemic in Guinea and Sierra Leone.

He said that despite the “ferocious rainy season” in West Africa, the number of Ebola cases has remained in the single digits for six consecutive weeks in Guinea and Sierra Leone. In addition, there are only three active chains of transmission in those countries, a development he described as a “major milestone in all three countries [Liberia being the third] in the march towards zero” cases.

“Our goal is zero transmission in the human population and that remains very possible within 2015,” he said.

The senior WHO official said that the focus of the current Ebola response was what he called Phase 3 aimed at ensuring that the residual risks are managed and guarding against the re-emergence of the disease, which has claimed more than 11,000 lives, mostly in West Africa.

Dr. Aylward described the remaining challenges as residual risk surveillance, sustaining rapid response teams, and survivor engagement and care, which includes the risks of transmission through semen by male survivors of Ebola.

Testing for the status of semen is underway, he said, but other precautions are also being looked into such as the vaccination of sexual partners or family members to reduce the risk if someone tests positive.

“This virus has a very nasty sting in its tail,” he said.

WHO’s latest weekly update on Ebola showed there were 2 confirmed cases of the disease reported in the week to 6 September: 1 in Guinea and 1 in Sierra Leone. 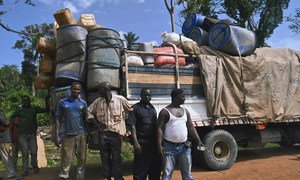 The World Health Organization (WHO) today declared Liberia free of Ebola virus transmission after the disease had resurfaced in June, and as the country enters a 90-day period of heightened surveillance, the number of cases in the rest of West Africa remained stable at three for the fifth consecutive week.