OCHA/Franck Kuwonu
This family fled north-east Nigeria across the border to Diffa, Niger, in fear of attacks by the terrorist group Boko Haram.
9 September 2015

Increased attention needs to be given to women so they can be empowered to actively help counter terrorism and violent extremism around the world, a senior United Nations counter-terrorism official told a news conference in New York today.

“Terrorist groups such as Daesh, Boko Haram and Al Shabaab are becoming increasingly creative in their strategies by also including women, [who] take a more active role in their criminal enterprise,” said Jean-Paul Laborde, the Executive Director of the Counter-Terrorism Executive Directorate (CTED). “I would even say ‘forcing’ women to take this active role, but this is my word.”

Mr. Laborde was briefing reporters ahead of a meeting of the UN Security Council’s Counter-Terrorism Committee on the role of women in countering terrorism and violent extremism.

“Until recently, terrorism has been viewed predominantly as a male problem,” Mr. Laborde stated. “In reality, terrorist organizations are gradually using women to recruit other women […] including women to act as suicide bombers.”

He further explained that many do not even know they are recruited to serve this purpose.

Recently, thousands of women in Iraq, Kenya and Nigeria were abducted by terrorist groups. Three women from these countries were invited to the press conference to share first-hand stories and to speak about their work fighting this trend.

Among them was Hanaa Edwar, a women’s activist from Iraq who underlined how the absence of security and stability in her country since 2003 has created weak state institutions and chaos, as well as influenced the growth of local militias.

“Daesh, the so-called Islamic State, occupied about one-third of our country in June 2015. This was a very hard moment in our Iraqi history, especially as the suffering of people increased every day,” said Ms. Edwar, adding that between 2003 and 2014, around 14,000 women in Iraq were killed.

She explained that the scale of gender-based crimes has been horrible, with sexual violence being used as a tool in the terrorists’ policy; as a result, many women have committed suicide due to the absence of safety, human rights and institutions to seek care.

Last July, Daesh reportedly announced a list of 2,070 people who were killed. Among them were 300 women, many of them lawyers, journalists, activists, or employees in the Government.

Nonetheless, Ms. Edwar underlined that she is hopeful thanks to the work of many non-governmental organizations in the county, several of which she founded.

“I feel hope when I look at the growth of the movement, the women’s movement, civil society movements against this terrorism and extremism,” she said. “We do a lot inside the community. We try to work with the children and young people to make them aware [of] how to counter terrorism.”

She also mentioned that a regional forum of women activists in the Middle East recently addressed how to counter “this heinous policy of terrorism,” but insisted that the support of the international community is needed. 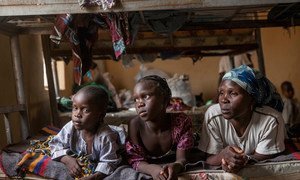 At a Headquarters forum on the role of media in combating terrorism, senior United Nations officials today expressed deep concerns over the impact of foreign terrorist fighters and their use of social media in spreading propaganda and radicalizing and recruit vulnerable young men and women to join their ranks.