An independent United Nations human rights expert has condemned the recent executions of 10 people in Chad who were suspected of being members of the terrorist group Boko Haram following a swift process that may not have met international standards.

The 10 were executed on 29 August following a three-day trial. Chadian authorities reintroduced the death penalty in the wake of terrorist attacks carried out in the country by Boko Haram between June and July.

“While I express my deepest rejection of the terrorist attacks in June and July, I encourage the Government to react to such events within the limits of its obligations under international law,” the Special Rapporteur on extrajudicial, summary or arbitrary executions, Christof Heyns, said in a news release issued yesterday.

“The death penalty is an extreme form of punishment and, if used at all, should only be imposed after a fair trial that respects the most stringent due process guarantees as stipulated in international human rights law,” he said.

According to the news release, it is unclear whether their swift trial abided by international human rights standards, or whether those executed were able to use their right to appeal, as the hearings were moved to a secret location on the last day.

Mr. Heyns noted that the last official execution in Chad took place in 2003, and called on the Chadian authorities to reinstate the moratorium on the use of capital punishment that was put into place in 2014.

“In addition to the other problems with these executions, when dealing with a right as fundamental in nature as the right to life, this back and forth between having the death penalty and not having it, is arbitrary,” he said. “Instead of making life more valuable, as the presumed intention behind the executions was, such conduct cheapens the lives of all concerned.” 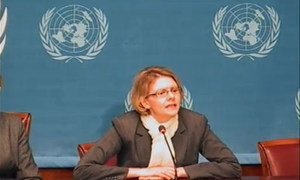 Following the first executions in Chad since 2003, the United Nations Office of the High Commissioner for Human Rights (OHCHR) today deeply regretted the resumption of the death penalty in that country and called for an official moratorium on its use.