UN Photo/Bitsure Jean-Claude
Peacekeeping chief Hervé Ladsous announcing at a press conference that the UN has established a weapons-free zone in the town of Bambari in the Central African Republic (CAR). Special Representative in CAR Parfait Onanga-Anyanga is at right.
8 September 2015

The United Nations has established a weapons-free zone in the town of Bambari in the Central African Republic (CAR), the world body’s peacekeeping chief announced today at the end of a four-day visit to the country.

The decision to establish the zone follows a call by the population of Bambari for further protection against armed groups, and aims to ensure the free movement of civilians as well as access by humanitarian workers to vulnerable people.

The visit by Under-Secretary-General for Peacekeeping Operations Hervé Ladsous comes as the UN Multidimensional Integrated Stabilization Mission in the Central African Republic (MINUSCA) marks one year since it began its operations.

“This is an opportunity to assess the situation and to sensitize our partners on upcoming deadlines – first the referendum on the constitution, and then elections,” Mr. Ladsous stressed during a press conference in the capital, Bangui.

Plagued by decades of instability and fighting, CAR witnessed a resumption of violence in December 2012 when the mainly Muslim Séléka rebel coalition launched a series of attacks. A peace agreement was reached in January 2013, but the rebels seized Bangui in March 2013.

A transitional government was established, but the conflict took on increasingly sectarian overtones by December 2013 as the mainly Christian anti-Balaka movement took up arms and inter-communal clashes erupted again in and around Bangui.

Since then, the UN peacekeeping chief said, the situation has largely improved in the capital, with much of the population back at work and moving around in the streets.

“[The upcoming elections] are an important step for national reconciliation. […] These elections must take place, before the end of the year and correctly,” Mr. Ladsous insisted.

In response to some political parties calling for another transitional government to be established, the UN official said it would be out of the question.

“The word transition has a clear definition. A schedule [for the elections] has been agreed upon by mediators, by countries in the region, and by the Security Council. The transitional government will be over on 31 December, and there will be no prolongations.”

Mr. Ladsous also highlighted a high-level meeting expected to take place on 1 October during the UN General Assembly which will focus on international commitments made by the global community for CAR.

“An example of support from the United Nations is $1 million being allocated on an exceptional basis to finance the elections,” he noted.

From his trip to Bambari, Mr. Ladsous recalled conversations with locals who said they are “tired and fed up with armed groups that fight and seek egotistical profits” at the cost of the population.

“One woman said to me: ‘we can’t continue like this. It’s unacceptable,’” he relayed, adding that he ensured her that armed groups will pay the price for acting against peace.

During the visit, Mr. Ladsous also met with MINUSCA personnel and discussed the fight against sexual exploitation and abuse, in the wake of recent allegations. 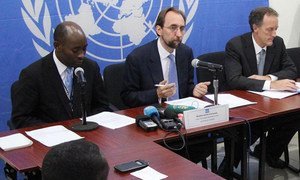 The human rights situation in the Central African Republic (CAR) is far better than it was at the height of the conflict in late 2013 and early 2014, but is still a cause of anxiety for both the country’s own inhabitants and the United Nations, the world body’s human rights chief said today.