Condemning the recent imprisonment of journalist and human rights activist Khadija Ismayilova, the United Nations High Commissioner for Human Rights voiced his concern today over the ongoing targeting and suppression of civil society and independent voices in Azerbaijan.

“Despite my repeated calls to the highest State authorities, including the President himself, undue pressure, harassment and intimidation against journalists, human rights defenders and activists by State authorities continue to be reported in Azerbaijan,” said Zeid Ra’ad Al Hussein.

“I call for the immediate release of all those who have been deprived of their liberty simply for exercising their rights to freedom of expression, association or peaceful assembly as well as for defending the rights of others,” he said.

According to reports, Ms. Ismayilova’s prosecution may have been connected to her work as an internationally recognized investigative journalist reporting on human rights violations and corruption in Azerbaijan.

On 1 September, she was sentenced to seven years and six months in prison on charges of embezzlement, tax evasion, illegal entrepreneurship and abuse of office.

Ms. Ismayilova’s trial gave her inadequate time for consultation with her lawyers, with limited public access to hearings, according to the UN human rights office (OHCHR). Motions filed by her defence were often rejected. It allegedly failed to meet international fair trial standards.

“Ms. Ismayilova’s sentencing is just the latest example of the crackdown on independent voices in the country. Azerbaijani authorities have already jailed a number of other journalists, human rights defenders and activists, including Leyla and Arif Yunus, Intigam Aliyev, Anar Mammadli and Rasul Jafarov, on different questionable charges,” said the High Commissioner.

He also noted that his office continues to receive troubling reports of the deteriorating health of several of those imprisoned for exercising their right to freedom of expression, and called on the Azerbaijani authorities to release them on humanitarian grounds.

UN food aid for 130,000 Azerbaijanis faces shut down due to funding shortfall 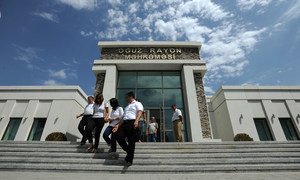