Supporting the achievement of the United Nations Sustainable Development Goals (SDGs) will be a key focus for the International Atomic Energy Agency (IAEA) in years to come, Director General Yukiya Amano told a meeting of the Agency's Board of Governors in Vienna today, where he also provided an update on the application of nuclear safeguards in Iran, Democratic Republic of Korea and Syria.

Touching on a range of other topics, the IAEA chief also spoke about the role of nuclear energy in the run-up to the global climate summit in Paris later this year, presented the Nuclear Security Report 2015 and encouraged the active participation of Member States in the IAEA's Scientific Forum, to be held next week, focusing on the industrial application of nuclear technology and its importance for development.

During its five-day meeting, the 35-member Board will discuss measures to strengthen international cooperation in nuclear, radiation, transport and waste safety, and the IAEA's technical cooperation activities, among other topics.

In his statement, Mr. Amano welcomed the recognition of the importance of science and technology for development in the UN 2030 Agenda for Sustainable Development, which are expected to be approved in a few weeks' time.

“The Agency has for many years made a major contribution to development by making nuclear science and technology available in areas such as food production, water management and agriculture. Our work deserves greater recognition,” he said.

Mr. Amano highlighted the important role the IAEA can play in assisting countries to meet the SDG target of reducing cancer-related deaths by a third in the next 15 years. “I believe this is an achievable goal provided there are strong partnerships among the international organizations concerned,” he said, noting that through its technical cooperation and human health programmes, the IAEA “has a long history of supporting Member States in developing the capacity and infrastructure for cancer control.

The IAEA chief went on to draw delegates' attention to his report on the Fukushima Daiichi nuclear power plant accident in Japan in 2011, which had been made available ahead of the IAEA's General Conference next week He also presented his fourth and final annual report on the implementation of the IAEA Action Plan on Nuclear Safety, adopted in the wake of the accident. While the implementation period for the Action Plan is coming to an end, work that began under the Action Plan will continue.

On another key issue, he said noted that many countries remain interested in nuclear power, not least due to the role it can play in fighting climate change. “Nuclear power is one of the lowest emitters of carbon dioxide among energy sources, considering emissions through the entire life cycle” said Mr. Amano.

Turning to nuclear safeguards, Mr. Amano expressed concern about the nuclear programme of the Democratic People's Republic of Korea (DPRK), reporting that the Agency remains unable to undertake verification in the country and its knowledge the DPRK's nuclear programme is limited. Using satellite imagery, the IAEA has observed renovation and construction activity at Yongbyon, which appears to be consistent with the country's own statements that it is further developing its nuclear capabilities.

“I call upon the DPRK to comply fully with its obligations, to cooperate promptly with the Agency, and to resolve all outstanding issues,” he added.

Mr. Amano went on to say the Agency continued to verify the non-diversion of nuclear material declared by Iran under its Safeguards Agreement. But it was not in a position to provide credible assurance about the absence of undeclared nuclear material and activities in Iran, and therefore to conclude that all nuclear material in Iran is in peaceful activities.

He noted that the Board had authorized him in August to undertake the verification and monitoring of Iran's nuclear-related commitments under the Joint Comprehensive Plan of Action (JCPOA) agreed by the so called 'E3/EU+3' countries – composed of China, France, Germany, Russia, the United Kingdom and the United States – and Iran.

He welcomed the fact that Iran would implement the Additional Protocol to its safeguards agreement with the Agency. “This will give the Agency greater access to information and to sites in Iran,” he said. “Implementation of the Additional Protocol is an essential prerequisite for the Agency to be able to provide, in due course, credible assurance about the absence of undeclared nuclear material and activities in Iran.”

Mr. Amano also addressed safeguards implementation in Syria and urged the country to “cooperate fully with the IAEA in connection with all unresolved issues.” 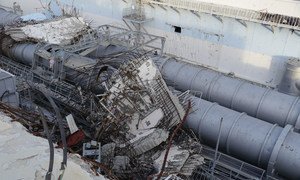 A new report on the 2011 nuclear accident in eastern Japan’s Fukushima area and two agreements related to the establishment of an International Atomic Energy Agency (IAEA) reserve of low enriched uranium were among the key points highlighted by Director General Yukiya Amano to the Agency’s Board of Governors today.