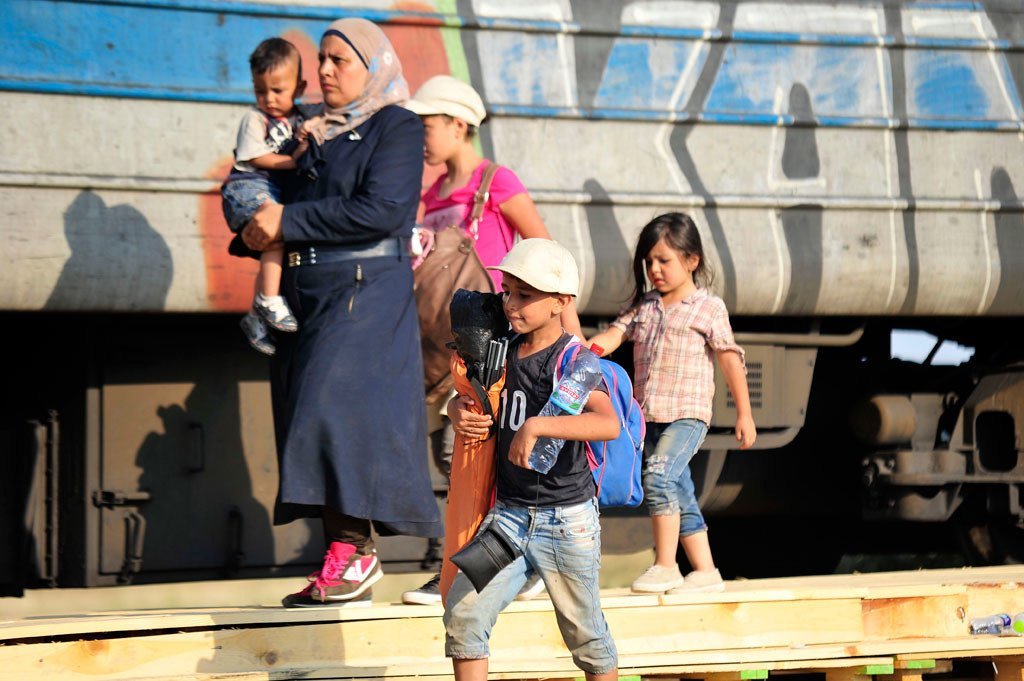 UNICEF/NYHQ2015-2083/Georgiev
A woman in the Former Yugoslav Republic of Macedonia walks with her grandchildren alongside a train track near Gevgelija, on the border with Greece. They will board the train, hoping to eventually arrive in Germany.
5 September 2015
Migrants and Refugees

As Austria and Germany begin receiving thousands of refugees and migrants who crossed the border last night from Hungary, the United Nations refugee agency hailed the decision as “political leadership based on humanitarian values,” while also applauding Austrian and German civil society groups gearing up to assist people as they enter their countries.

In a statement the Office of the UN High Commissioner for Refugees (UNHCR) welcomed the decision of Austria and Germany to take in thousands of refugees that had been at the border of Hungary.

Praising the civil society groups and individuals of Austria and Germany who are mobilizing in large numbers to welcome and provide aid to people as they enter, UNHCR said that “all over Europe, [we are] witnessing a remarkable outpouring of public response, including from faith-based organizations, NGOs [non-governmental organizations] and individuals, in many cases driving governments to change policies and rhetoric.”

However, the agency warns that the current concentration of refugees and migrants in a small number of countries willing to receive them is not a sustainable solution.

“There is clearly an urgent need to put in place an emergency plan to manage the refugee crisis,” says UNHCR, recalling the concrete proposals put forward yesterday by the UN High Commissioner for Refugees, António Guterres, who said that dealing with the biggest influx of refugees into Europe for decades requires a “massive common effort” and break with the current fragmented approach, which he said has led Europe overall to fail to find an effective common response.

“A very preliminary estimate would indicate a potential need to increase relocation opportunities to as many as 200,000 places,” he recommended. “This can only work if it goes hand in hand with adequate reception capacities, especially in Greece. Solidarity cannot be the responsibility of only a few EU member States. Europe is facing a moment of truth.”

Mr. Guterres' call to action came just hours before UNHCR expressed sadness at the death of a 50-year-old man, on Friday, near a refugee reception centre in the Hungarian town of Bicske.

UNHCR staff on the ground were gathering exact details about the circumstance of the death. However, initial reports suggested the man falling down and hitting his head against train tracks, while trying to run away from the police at the train station. An ambulance was called which tried to provide medical assistance on the spot, but the man reportedly died after 50 minutes of the incident.

"This is a shocking incident," said Montserrat Feixas Vihé, UNHCR's regional representative for Central Europe in Budapest. "All our thoughts and sympathies are with his family."

The incident apparently happened when refugees and migrants were brought from the Keleti train station in Budapest refused to move to a refugee reception centre. After a long standoff over 200 of them started to get off and ran away from the police.

"This tragic death illustrates the desperation of those arriving in Europe in search of safety," UNHCR's Feixas Vihé added.

"We urge the Hungarian authorities to put in place immediate and adequate emergency reception, assistance and registration capacity, so that refugees disembarking in Europe are welcomed into a safe and caring environment."

♦ Receive daily updates directly in your inbox - Subscribe here to a topic.
♦ Download the UN News app for your iOS or Android devices.
Germany|austria 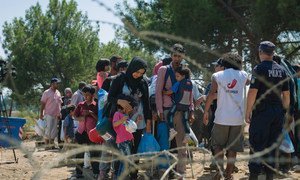 UN urges Europe to admit 200,000 refugees from Syria, Iraq and other war zones

Declaring that Europe is facing “a moment of truth” with hundreds of thousands of people risking their lives to cross the Mediterranean Sea, the head of the United Nations refugee agency today urged the European Union (EU) to admit up to 200,000 asylum-seekers fleeing conflict zones like Syria, Iraq and Afghanistan.