On International Day, Ban calls on people everywhere to act charitably in the face of human suffering

On the International Day of Charity, marked annually on 5 September, United Nations Secretary-General Ban Ki-moon is calling on people everywhere to volunteer and act charitably in the face of human suffering.

“At a time when the need for humanitarian assistance has never been higher and when there are more refugees and displaced people than at any time since the end of the Second World War, charities play an increasingly vital role in meeting human need,” the UN chief said in a message.

The International Day coincides with the anniversary of the death of Mother Teresa, who was awarded the Nobel Peace Prize in 1979 for her work to overcome poverty. The UN chief recalled that upon receiving the prize, she famously gave the money that came with it to some of the poorest people in India.

He said such expressions of solidarity help us in our shared quest to live together in harmony and build a peaceful and sustainable future for all.

the public as well as the generosity of governments to continue their lifesaving work in response to development challenges, natural disasters, armed conflicts and other emergencies,” Mr. Ban added.

He also highlighted that the resources, knowledge and ingenuity of philanthropic and volunteer organizations will be invaluable partners in implementing the new 2030 Agenda for Sustainable Development, which will be adopted by UN Member States at the end of month.

Ban Ki-moon said this is in line with the Addis Ababa Action Agenda, a series of bold measures adopted by UN Member States in the Ethiopian capital this past July to overhaul global finance practices and generate investments for tackling a range of economic, social and environmental challenges.

New UN orchestra to strike a chord for world peace 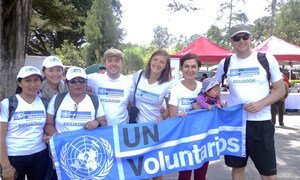 Nothing in Piera Zuccherin’s comfortable upbringing foretold her lifelong involvement as a volunteer. But today, she is one of the more than one billion people who volunteer globally.