WFP
The Sea Athena arrived and unloaded a large shipment of wheat in Al-Saleef port in northwestern Yemen which will provide enough to feed more than 1 million people for two months.
4 September 2015

The head of the United Nations humanitarian wing today released an emergency allocation of $15 million to help alleviate the “almost incomprehensible” scale of human suffering in Yemen where a “shocking” four out of every five Yemenis are lacking in such basic items for survival as clean water, food, fuel, and medicines.

“The civilian population is bearing the brunt of the conflict: a shocking four out of five Yemenis require humanitarian assistance and nearly 1.5 million people are internally displaced,” said Stephen O’Brien, the UN Under-Secretary-General for Humanitarian Affairs, who is also the UN Emergency Relief Coordinator.

Meanwhile, the World Food Programme (WFP), which is trying to expand assistance in Yemen to reach the more than 6 million people who require food aid announced today that enough wheat to feed more than 1 million for two months has arrived.

WFP said the wheat from the United States Agency for International Development (USAID) arrived at the Al-Saleef port in north-western Yemen and is being milled into flour at the port.

The announcement by Office for the Coordination of Humanitarian Affairs (OCHA) reported that Mr. O’Brien released an additional $15 million from the UN Central Emergency Response Fund (CERF), bringing support for humanitarian operations in Yemen to more than $44 million in 2015.

According OCHA, the provision of basic services, including water, sanitation and healthcare, has been severely disrupted.

“Despite these immense challenges and safety concerns, relief organizations on the ground are working hard to reach people in need,” according OCHA.

“This latest allocation from CERF will help reduce the risk of communicable diseases through waste clean-up, the provision of clean water and urgent supplies for health facilities,” it said “CERF funds will be used for demining and the removal of unexploded ordnance, which will increase the safety of civilians and expand humanitarian space to reach people in need. People who have fled their homes will also receive household supplies such as mattresses, blankets, kitchen sets and water buckets.”

The conflict in Yemen intensified in March this year and aid agencies have since received over $44 million from CERF for critical assistance, including the provision of fuel, medicine, clean water, sanitation services and nutrition, OCHA said.

The CERF grants have been used to scale-up humanitarian air services and improve port facilities, facilitating the delivery of lifesaving assistance to affected communities.

“CERF continues to provide a lifeline for humanitarian operations in Yemen, but more funds are urgently needed,” Mr. O’Brien said. “I urge donors to continue supporting relief efforts in Yemen.”

The Fund pools donor contributions in a single fund so that money is available to start or continue urgent relief work anywhere in the world. Since its inception in 2006, 125 UN Member States and dozens of private sector donors and regional authorities have contributed to the Fund. CERF has allocated more than $4 billion in support of humanitarian operations in 95 countries and territories. 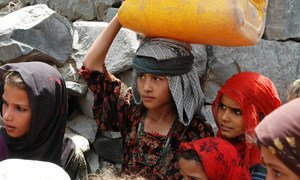 Yemen: UN calls for unimpeded access to people in need as fighting intensifies in southwestern region