‘Shock must be matched by action,’ UNICEF chief says as Europe’s refugee and migrant crisis deepens

UNICEF/Tomislav Georgiev
On 26 August 2015, a distressed child rests over the shoulder of the man carrying him, in the town of Gevgelija, on the border with Greece and the former Yugoslav Republic of Macedonia.
3 September 2015

As the “heart-breaking” image of a drowned refugee boy who washed up on a beach in Turkey ricocheted around the world on social media, along with equally painful images of children lying suffocated in the backs of trucks crossing borders and being passed over barbed wire fences by desperate parents, Anthony Lake, Executive Director of the United Nations Children’s Fund (UNICEF) today made a powerful plea for action to protect migrant and refugee children.

“It is not enough for the world to be shocked by these images. Shock must be matched by action,” declared the UNICEF chief.

In a statement issued by the agency, Mr. Lake advocated that all decisions regarding the child migrant and refugee crisis in Europe be guided by the best interests of the children involved, and that measures be taken to ensure they receive adequate health care, food, emotional support, education, shelter and protection.

UNICEF estimates that at least a quarter of the hundreds of thousands of people who have sought refuge in Europe are children, many of whom have fled the conflict in Syria.

Some 2,500 people have died or gone missing this year while attempting the crossing to Europe.

“Our hearts go out today to the families who have lost children – off the coasts, on the shores, and along the roadsides of Europe,” said Lake. “As the debates on policies proceed, we must never lose sight of the deeply human nature of this crisis. Nor of its scale,” he added.

“And we should never forget what lies behind so many of the stories of families seeking sanctuary in Europe: terrible conflicts such as that in Syria, which already has forced some 2 million children to flee their country. Only an end to these conflicts can bring an end to the misery of so many.” 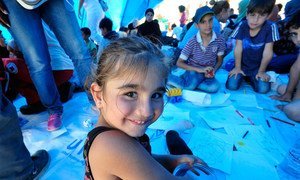 The number of “exhausted and desperate” women and children making their way from Syria, Afghanistan and Iraq through the former Yugoslav Republic of Macedonia seeking refuge in Europe has tripled in the past three months, the United Nations Children’s Fund (UNICEF) said today.