UNICEF/Razan Rashidi
In the Tishreen camp for displaced persons in Aleppo, Syria, residents go about their daily lives.
3 September 2015

With nearly half Syria’s population now displaced or made refugees by a “protracted and chaotic” conflict, the head of a United Nations-mandated human rights inquiry today warned that while the world watches, civilians, Syrians of all backgrounds, are being subjected to war crimes, as well as other gross violations of their human rights.

“Civilians are suffering the unimaginable, as the world stands witness. Without stronger efforts to bring parties to the peace table, ready to compromise, current trends suggest that the Syrian conflict – and the killing and destruction it wreaks – will carry on for the foreseeable future,” said Paulo Sérgio Pinheiro, Chair of the Independent International Commission of Inquiry on the Syrian Arab Republic.

In a press conference on the release of the Commission’s tenth report on the situation in Syria, he said: “We must do more for the victims of this conflict who have been forced to flee their homes and to seek protection and refuge under the direst of circumstances.”

Mr. Pinheiro also stressed that it is imperative for the world community to act with humanity and compassion by developing legal channels of migration that increases the protection space for asylum seekers and refugees.

According to the Commission, the armed conflict in Syria, now in its fifth year, has become a protracted and chaotic non-international armed conflict. A proliferating number of warring parties continues to display a complete disregard for their international legal obligations by targeting civilians, residential areas, and locations protected under international law.

Combat tactics employed by all sides to the armed conflict, such as the use of siege warfare, indiscriminate shelling and use of air power have resulted in mass civilian casualties, destruction of Syria’s cultural heritage and displacement of Syrian civilians on a massive scale, says the Commission.

In its report, the Commission, which was established in 2011 by the UN Human Rights Council, is concerned that warring sides continue to target civilians, including fighting-age men, women, children, detainees, the sick and wounded, medical and humanitarian workers, journalists, human rights defenders and internally displaced person. It calls for urgent action to ensure the protection and safety of all civilians.

The report notes that atrocities are being carried out by both Government and terrorist groups, including the Islamic State of Iraq and the Levant (ISIL) and Jabhat Al-Nusra. Government forces “have committed gross violations of human rights and the war crimes of murder, torture, rape, sexual violence and targeting civilians” and its indiscriminate aerial bombardments have led to mass civilian casualties. ISIS, meanwhile, continues to murder, torture, rape, and forcibly displace civilians.

The Commission goes on to report that men are the primary civilian victims of enforced disappearance, torture and unlawful killing. Women and girls are also targeted, with Government forces arresting female lawyers, journalists and peace activists.

The report is scheduled to be presented later this month during an interactive dialogue at the 30th session of the Human Rights Council. 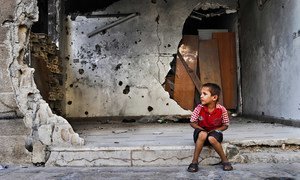 Four United Nations human rights experts briefed the Security Council today on a new report into human rights and humanitarian law violations in Syria since the uprising in the country began, saying unthinkable crimes continue occurring daily, with victims' voices in danger of being lost amid the horrors of the conflict.