ICC-CPI
Bosco Ntaganda at the opening of his trial at the International Criminal Court (ICC) in The Hague, Netherlands, on 2 September 2015.
2 September 2015

As the International Criminal Court (ICC) trial of Congolese rebel leader Bosco Ntaganda opened today, the UN Special Representative on Sexual Violence in Conflict said that it served as a powerful reminder to military leaders accused of similar acts that justice will ultimately prevail.

Zainab Hawa Bangura called the ICC trial, which opened today in The Hague, Netherlands, “a victory for survivors of the savage attacks allegedly perpetrated under Mr. Ntaganda’s military leadership, and for the families of those survivors and human rights advocates fighting on their behalf.”

Mr. Ntaganda, the former Deputy Chief of the General Staff of the Force Patriotiques pour la Libération du Congo (FPLC), stands accused of 13 counts of war crimes and five counts of crimes against humanity committed in 2002 and 2003. The charges against him include rape, murder, and the conscription of child soldiers. Mr. Ntaganda pled not guilty as the trial entered its first day.

Ms. Bangura commended the Court for pursuing the case, and praised the victims, witnesses and experts taking part the trial.

“Their courage and resolve to see justice done is inspirational for us in the international community, as we continue to fight together to eradicate sexual violence in conflict,” she said.

Ms. Bangura also noted that her Office, as well as the UN Team of Experts and UN Action Against Sexual Violence in Conflict continues to support the Democratic Republic of the Congo (DRC) Government to implement commitments made under Joint Communiqué on the fight to end sexual violence in conflict. The agreement, she said, includes ensuring accountability for such crimes.

“I was pleased today to hear that a military court charged 18 soldiers and police officers with murders and rape in connection with crimes committed in Kasindi, Mbau, Nobili and Kamango localities in the eastern province of North Kivu,” she said.

action plan against sexual violence, to bring perpetrators to justice and to give reparations to victims. 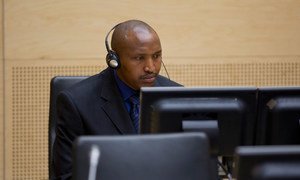 The International Criminal Court (ICC) set 23 September as the start date for the confirmation of charges hearing for Congolese rebel leader Bosco Ntaganda, who made his first appearance before the tribunal today.