“Tangible” results have been achieved for a political deal in Libya, but concrete solutions to the conflict will only be reached when all parties agree on a final draft, the United Nations envoy facilitating efforts to restore peace in the North African country said today.

Speaking to journalists in Istanbul after his meeting with a delegation of the Libyan General National Congress (GNC), Bernardino León, the Secretary-General’s Special Representative and head of the UN Support Mission in Libya (UNSMIL), described the encounter as a “very frank and very open discussion.”

It has been seven months since UNSMIL launched a political dialogue process to find a peaceful solution to the conflict which intensified one year ago.

Last week, the GNC did not attend a round of talks in Morocco organized by Mr. León, explaining that it needed to reorganize its negotiating team following the resignation of two members.

“This is the first meeting with an important number of [GNC] members in a more open format and this is something that should continue,” Mr. León stressed.

The UN envoy added that he encourages GNC members to continue to engage and discuss to find a solution as soon as possible.

He explained that although a draft agreement was initialled by some parties on 12 July, an agreement will only be reached when a final package “makes sense for everybody and will be signed by everybody.”

Mr. León said he hopes a final agreement is endorsed within the next two or three weeks so its implementation can begin on 20 October.

A two-day political dialogue on Libya is set to begin tomorrow in Geneva. 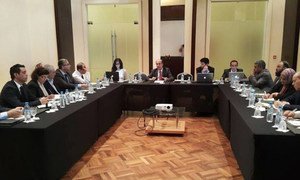 The United Nations Support Mission in Libya (UNSMIL) has announced that a round of Libyan political dialogue began today in Skhirat, Morocco, with discussions expected to focus on expediting the process towards finalizing the Libyan Political Agreement, including reaching agreement on a Government of National Accord.